Summer vagrant and migration visitant; formerly bred in Minnesota from 1971 to 1981. The Little Blue Heron was a very rare species during the Minnesota Breeding Bird Atlas (MNBBA).

Found primarily in the southeastern United States, from Virginia south along the coast, in adjacent inland areas to Texas, up the Mississippi River to the southern Ohio River, and in the southern Great Plains to Kansas. In the East, it is a rare and local breeder up the coast to southern Maine, and in the West it can be found in isolated colonies in South Dakota, New Mexico, and California. There are two northern disjunct colonies that have very small but persistent populations: one in Ohio, located on West Sister Island in western Lake Erie (Peterjohn and Rice 1991; Rodewald et al 2016); and one in South Dakota, where birds have bred at various sites in the northeastern part of the state but mostly at the Sand Lake National Wildlife Refuge in Brown County (Tallman et al. 2002). The Little Blue Heron is present year-round along the U.S. coast from Virginia to Texas. It also is a permanent resident, with local breeding populations, throughout the West Indies, coastal Mexico, Central America, and northern parts of South America. In North America, the highest breeding densities are found along the Gulf coast of Louisiana and Texas (Figure 1).

Designated a Species of High Concern by the North American Waterbird Conservation Plan; assigned a Continental Concern Score of 11/20 by Partners in Flight.

Banding records show some migration as far as South America, but other birds winter in the southeastern United States.

Feeds primarily on small fish, amphibians, and crustaceans, including crabs and crayfish. It may also feed on grasshoppers and other insects in upland fields. A solitary forager, it quietly stands or slowly stalks its prey, in contrast to the Snowy Egret, which is a social feeder with active, dancing foraging techniques.

A platform nest of sticks placed in low shrubs and small trees. The species is a colonial nester and occupies small territories in multispecies colonies or nests in small single-species colonies. Some larger Little Blue Heron colonies are in association with Cattle Egrets, whose aggressive behavior may impact nesting success. 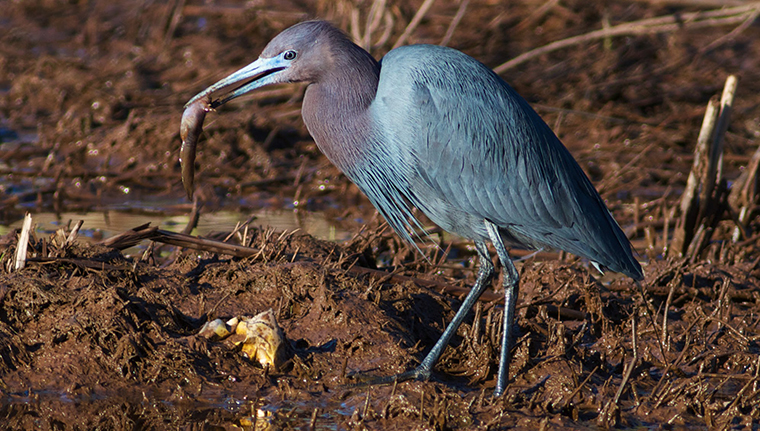 Breeding distribution and relative abundance of the Little Blue Heron in North America based on the federal Breeding Bird Survey, 2011–2015 (Sauer et al. 2017).

Documentation for the nesting evidence at each of these colonies was published in The Loon in several ways, either in an article, a note of interest, or in seasonal reports. Citations are as follows: (1) Lake Johanna: Hitman 1972; Green and Baumhofer 1972; Eckert 1973a; Carr 1974; Hiemenz 1981. (2) Big Stone NWR: Buer and Buer 1977; Eckert 1978; Green 1979. (3) Pelican Lake: Eckert 1973b. (4) Pig’s Eye Island: Green 1980; Janssen 1987. There has been no nesting evidence reported since these published reports. Guertin and Pfannmuller (1985) noted that three of the sites (Pelican Lake, Lake Johanna, and Big Stone NWR) were surveyed in 1984 but Little Blue Herons were not detected. Since then, statewide surveys of colonial waterbirds have been limited to 5 aerial surveys of Double-crested Cormorant and American White Pelican colonies conducted from 2004/2005 to 2015 (Hamilton and Cuthbert 2016).  Although somewhat limited in scope, the survey has included many of the state’s largest mixed species colonies, including all 4 sites where the Little Blue Heron was previously documented nesting. Nevertheless, none of the surveys have detected this rare species. Periodic ground surveys in mixed-species colonies that contain hundreds of nests of herons, egrets, and cormorants can be difficult but are usually the most effective tool to identify the presence of rare species.

After the period when the Little Blue Heron was found nesting in Minnesota (1971–1981), this species was classified by the Minnesota Ornithologists’ Union as a rare spring and fall migrant and a rare summer visitant. During migration, when the birds are vagrants or dispersers, the observations are primarily (about 80%) in the southern half of the state. Sites in northern Minnesota where they have been observed are primarily in counties on the western margin of the state but include 4 to 5 records at hot spots on the North Shore of Lake Superior. There were fewer observations after the 1990s, resulting in its reclassification as a summer vagrant and a visitant during migration.

During the MNBBA, only 2 Little Blue Heron records were reported (Figure 2 and Table 1); both were coded as “observed” records. The first was reported from Lake Park Township in Becker County by the U.S. Fish and Wildlife Service on June 1, 2009. Given the early June date, it was probably a migrant. The second record is from Beltrami County on June 17, 2009. 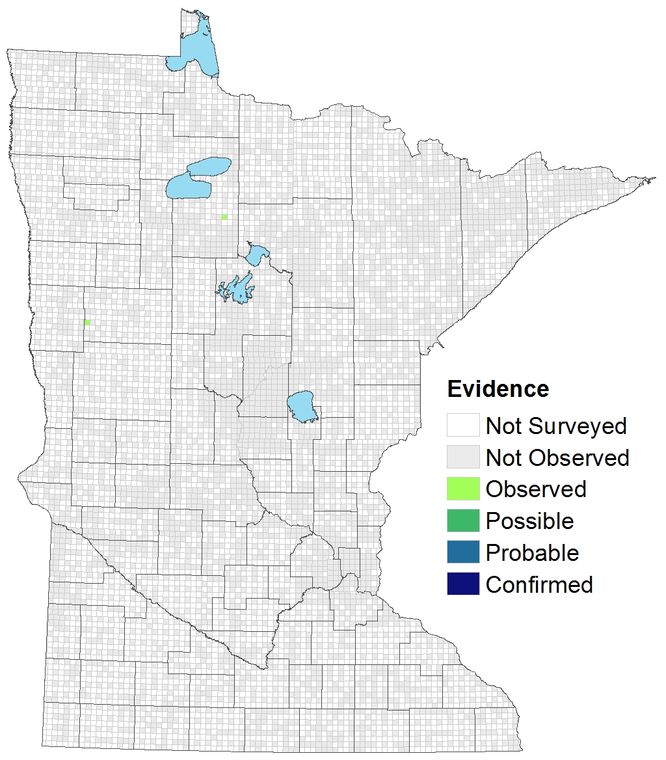 Breeding distribution of the Little Blue Heron in Minnesota based on the Breeding Bird Atlas (2009 – 2013).

Summary statistics for the Little Blue Heron observations by breeding status category for all blocks and priority blocks (each 5 km x 5 km) surveyed during the Minnesota Breeding Bird Atlas (2009-2013).

Colony sites are located in a variety of wetland habitats, including marshes, swamps, lakes, ponds, and impoundments. Most breeding is at freshwater inland sites but also in coastal areas on dredge-spoil islands. Birds may forage in freshwater or saltwater habitats (Rodgers and Smith 2012).

Little information is available on population trends or colony numbers of the Little Blue Heron. The North American Waterbird Conservation Plan stated that there is “insufficient information” to provide any population figures. The Upper Mississippi River/Great Lakes Waterbird Conservation Plan cited a North American population estimate of 200,000 to 300,000 breeding individuals and a population of approximately 2,200 breeding pairs within the five Bird Conservation Regions (12, 13, 22, 23, and 24) that comprise the Great Lakes Region south to northern Arkansas, northeastern Oklahoma, central Kentucky, and central Tennessee (Wires et al. 2010). In the Northern Prairie and Parkland Region, where isolated breeding has occurred in South Dakota and Minnesota, the Little Blue Heron makes up less than 1% of the continental population (Beyersbergen et al. 2004). Partners in Flight (2017) estimated the global population (North America, Central America, and South America) at 330,000 breeding adults. This heron is difficult to survey from the air and also from the ground because it is a minor species in the mixed-species colonies that it occupies.

In Minnesota three of the colonies where it was found breeding are designated by the Minnesota Department of Natural Resources as scientific and natural areas: Egret Island (Pelican Lake), Bruce Hitman Heron Rookery (Lake Johanna), and Pig’s Eye Island Heron Rookery (St. Paul). However, no ground surveys have been done in any of these rookeries since 1984 and aerial surveys conducted since 2004/2005 (Hamilton and Cuthbert 2016) have not detected the species..

Long-term monitoring data collected throughout North America by the federal Breeding Bird Survey demonstrate a significant population decline of 1.57% per year from 1966 to 2015; the trend has leveled off slightly in the most recent 10-year reporting period, from 2005–2015 (Figure 3). In their comprehensive review of the species, Rodgers and Smith (2012) suggest that the “alteration of foraging habitat and food availability” are the primary factors impacting populations.

Because the Little Blue Heron does not have the extravagant white plumes of the Snowy Egret, it was not a prime target of the unregulated plume hunting at the turn of the 20th century that devastated so many colonial birds. But the habitat disturbance involved in the killing of other herons and egrets must have had some effect on Little Blue Heron populations. Since that time, its numbers have increased, and its range has expanded northward. 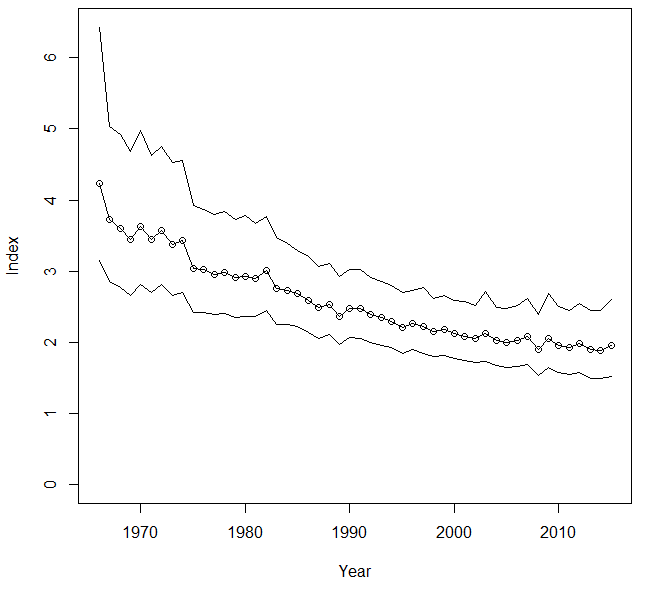 Breeding population trend for the Little Blue Heron in North America for 1966–2015 based on the federal Breeding Bird Survey (Sauer et al. 2017).

Although the Little Blue Heron is now a protected species, populations are still at risk from a variety of habitat threats, such as adverse wetland conditions resulting from drainage and sedimentation, and habitat loss from development. Ecological contaminants are also a concern (Rogers and Smith 2012). The Little Blue Heron is not listed by the federal government and is only rarely listed by state governments (New Jersey, “special concern”). The North American Waterbird Conservation Plan ranks the Little Blue Heron as a Species of High Concern (Kushlan et al. 2002). Partners in Flight (2017) assigned it a moderate Continental Concern Score of 11/20. Its small population size, declining population trend, and threats to its breeding and wintering habitat were principal concerns. The “State of the Birds 2010 Report on Climate Change” assessed the species’ vulnerability to climate change as low (North American Bird Conservation Initiative 2010).

As mentioned earlier, the major colonies that have supported Little Blue Herons in Minnesota are designated scientific and natural areas. Although these sites are protected, there is a critical need for better inventories of colonies sites throughout North America and for comprehensive monitoring of population trends. In Minnesota, the 5 aerial surveys conducted by Hamilton and Cuthbert (2016) since 2004/2005, have been critical in monitoring the most common species that nest in many of the state’s largest colonies. Should these efforts cease, resource professionals should consider establishing another cost-effective monitoring tool. In the absence of intensive ground surveys that may document the presence of rare species, it is important to know that these colonies continue to support large and thriving populations of common species such as the Great Blue Heron, Great Egret, and Black-crowned Night-Heron.

Foraging sites located near breeding colonies and at migratory stopover sites need protection as well. As Rogers and Smith (2012) concluded, “continued population decline, despite protection of colony sites, suggests that preservation of important foraging habitat has not been successful.”