A regular breeding resident and migrant; increasingly overwinters in the state. The Merlin was uncommon during the Minnesota Breeding Bird Atlas (MNBBA).

A Holarctic species breeding across the entire northern Nearctic and Palearctic regions. In North America the species is found across all the Canadian provinces and Alaska to the tree limit and has a year-round distribution in the prairie parklands of the northern Great Plains in the United States and in the Canadian Prairie provinces. Its breeding distribution is expanding southward into all of the northeastern and midwestern states. The Merlin is sparsely distributed throughout its range (Figure 1).

A short- to long-distance migrant; rare in Minnesota during winter. Most individuals from Minnesota are thought to migrate across the western and coastal areas of the United States, Mexico, the Caribbean, and Central America, and as far south as Ecuador in South America.

Predator of small to medium-sized birds, usually captured on the wing or off perches.

Site usually high in a coniferous tree within forested or open habitats of riparian areas of lakes and rivers and in urban areas; rarely on the ground, on a cliff, or in a cavity. Does not build its own nest but uses old crow, raven, or hawk nests. 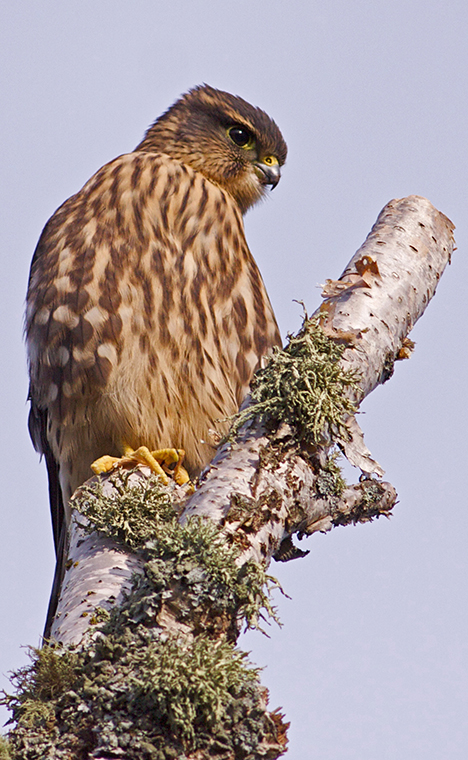 Breeding distribution and relative abundance of the Merlin in North America based on the federal Breeding Bird Survey, 2011–2015 (Sauer et al. 2017).

Three subspecies of the Merlin are recognized. The Minnesota race is the “Boreal Merlin” (Falco columbarius columbarius). The two others are the dark-colored “Black Merlin” (F. c. suckleyi), found in the Pacific Northwest; and the light-colored “Prairie Merlin” (F. c. richardsonii), from the northern prairies (Warkentin et al. 2005).

Though Roberts (1932) observed this species “not over a half a dozen times during fifty years,” he lectured on the identification of the Merlin as follows: “When a student has thoroughly learned the difference in appearance and flight between the Sparrow Hawk and the Sharp-shinned Hawk, between a Falcon with long, narrow wings, and an Accipiter with short, rounded wings, he will be able, if a good opportunity offers, to identify a Pigeon Hawk.” The Merlin was formerly known as the Pigeon Hawk because its flight had a resemblance to that of a pigeon.

Roberts (1932, 1936) labeled the species as “mainly a migrant, spring and fall,” but he acknowledged there were several summer records, evidence that it “breeds infrequently in the extreme northern part of the state.” He noted observations of Merlins that indicated nesting in many areas, specifically at Leech Lake and in Cook, Itasca, Marshall, and St. Louis Counties. He reported that nests had been found in adjacent North Dakota in 1893, and in Grinnell, Iowa. In Iowa, Bailey (1918) also reported this observation, as well as 1 found in Marion, Iowa, in 1908.

As of 1932, Roberts (1932) had never reported a positive nesting of this species in Minnesota, but by the time the 1936 version of his treatise was published, 3 nests had been located in northern Cook County. One nest with 4 young was found on Gunflint Lake, and another with 3 young and 1 egg on Saganaga Lake. The third observation was thought suspicious; a nest was reportedly found on Lake Winchell, where “mice” were being brought to the nest. Merlins are known to feed primarily on birds, large insects, and bats. Small mammals are rarely reported as prey, although they have been in Sweden when small rodents are at high density (Warkentin et al. 2005). Four nests were also found on the north shore of Saganaga Lake, all with young, but these were located in Canada.

Decades later, Green and Janssen (1975) identified the Merlin as a summer resident “in the northeastern and north-central regions and adjacent counties in the northwestern region.” They suggested it was a very scarce species, except along the Canadian border and possibly in Kittson and Roseau Counties. They reported confirmed nesting in Cook, Lake, and St. Louis Counties. Years later, Johnson (1982) echoed the same distribution described by Green and Janssen. His summary included (1) 8 confirmed nesting records from 1935 to 1981 from Cook, Lake, and St. Louis Counties, including 1 record from Minnesota Point in Duluth in 1952; (2) 33 summer observations from 1922 to 1981, and 35 records between 1952 and 1979 of “reported nesting” and “defending adults seen” from the same 3 counties; and (3) summer observations from Cass, Lake of the Woods, Kittson, Roseau, Morrison, Becker, Beltrami, Carlton, Itasca, Hennepin, Otter Tail, Marshall, and Stearns Counties. Possible nesting was also suggested for Agassiz National Wildlife Refuge in Marshall County and for Wadena County.

The Minnesota Biological Survey recorded 49 breeding season locations for the Merlin (Minnesota Department of Natural Resources 2017). Most were located in northern Lake and St. Louis Counties, but locations were identified as far south as Carlton and Aitkin Counties, west to southern Beltrami County, and in the northwest, where there were single locations in Kittson and Roseau Counties.

The MNBBA reported 401 records of the Merlin and greatly expanded the potential breeding range of the species in Minnesota (Figure 2). Records were located as far southeast as Winona County, southwest to Meeker County, and west to Wilkin and Polk Counties. A total of 56 blocks had confirmed nesting records, and 71 had probable nesting records (Figure 3; Table 1). A total of 6.1% (291/4,743) of the blocks covered included some evidence of Merlins, while 6.5% (153/2,337) of priority blocks included Merlins. Confirmed nesting was identified in 20 counties, ranging as far south as Dakota County and northwest to Marshall, Polk, and Roseau Counties.

Hatch (1892), Roberts (1932, 1936), and Robbins (1991) in Wisconsin all suggest that the Merlin was a rare species in Minnesota and Wisconsin in the late 1800s and early 1900s. Hatch (1892) stated, “I have never yet seen a specimen of them alive, much as I have been on the alert for them.” Cadman et al. (2007) cited earlier accounts that said that in the early 1900s Merlins were considered an abundant breeder along western James Bay in Ontario, and in the mid-1930s, a regular breeder across central and northern Ontario.

In his detailed summary on the status of the Merlin, Evans (1982) documented that the “Prairie or Richardson’s” subspecies suffered the most serious population declines during the DDT era in the mid-1900s. He also stated that the “Boreal or Taiga” Merlins also declined to some extent but suggested they had stabilized by the early 1980s. Unfortunately, they are still being exposed to organochlorine compounds during migration and in overwintering areas, which is enough to affect reproductive success (Farmer et al. 2008).

Warkentin et al. (2005) emphasized that many data sets indicated Merlins had recovered from the widespread population declines of the 1960s and suggested either stable or increasing populations from the 1960s through the early 2000s. Merlins have made a remarkable recovery and expansion in their North American population through their use of urbanized landscapes. In Minnesota, Merlins have substantially increased over the past 100 to 150 years, especially through their colonization and use of old crow nests in urban areas. Similar increases have been reported in Michigan, Ontario, and Wisconsin. For instance, Ontario found a 100% increase in the probability of observation of the species from its first atlas (1981–1985) to its second atlas (2001–2005) (Cadman et al. 2007). 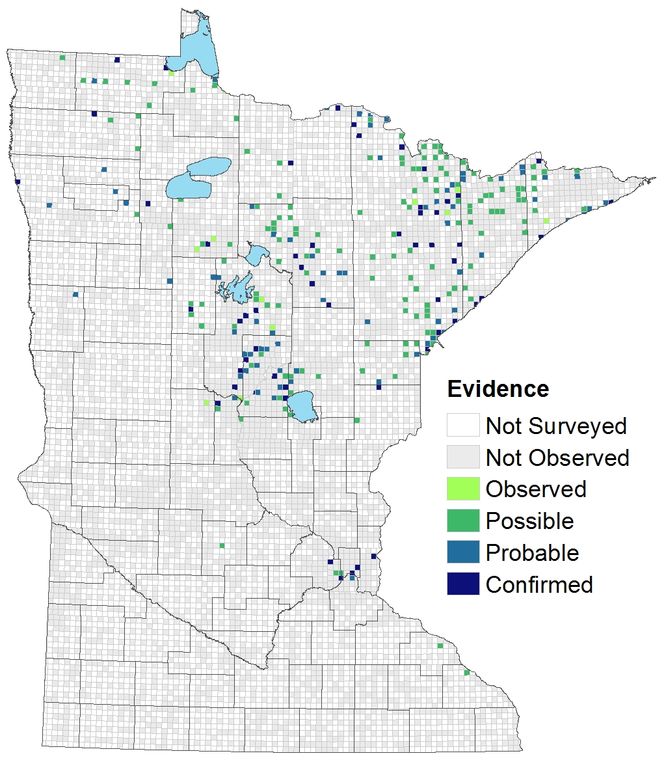 Breeding distribution of the Merlin in Minnesota based on the Breeding Bird Atlas (2009 – 2013).

Summary statistics of observations by breeding status category for the Merlin in Minnesota based on all blocks (each 5 km x 5 km) surveyed during the Breeding Bird Atlas (2009-2013).

Summary statistics for the Merlin observations by breeding status category for all blocks and priority blocks (each 5 km x 5 km) surveyed during the Minnesota Breeding Bird Atlas (2009-2013).

Merlins primarily use shorelines of lakes, rivers, and bogs; forest openings; and islands of larger lakes, especially those with large evergreen trees with suitable nest sites (Johnson 1982; Warkentin et al. 2005). Evans (1982) noted the use of coniferous trees near open areas, such as forest edges, bogs, and lakes, and that nesting near water appears to be common. More recently, urban and suburban woodlots or forested areas with large evergreen trees, food, and nest sites have proven to be suitable nesting areas (Figure 4). 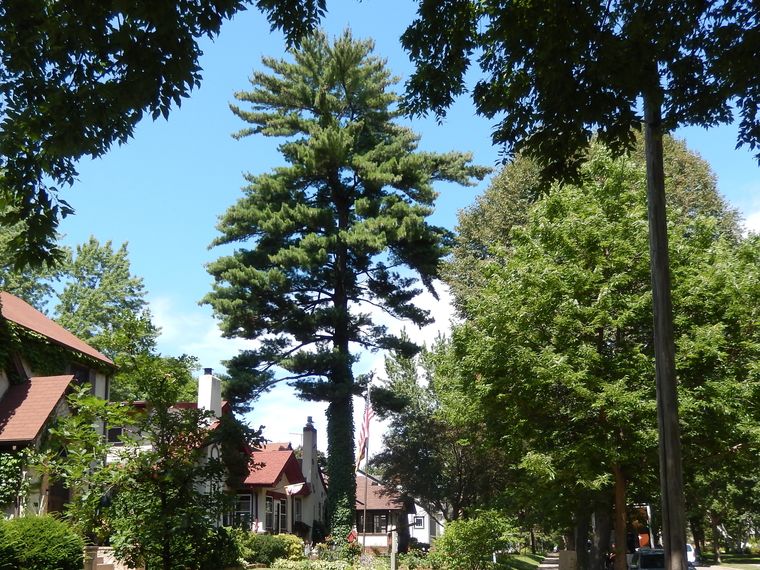 Typical breeding habitat of the Merlin in an urban setting (© Lee A. Pfannmuller).

Overall, Merlins are still a sparsely distributed species in Minnesota and globally. Population estimates by Partners in Flight (2017) were 1.1 to 1.3 million individuals in North America and 9,000 in Minnesota.

Trend estimates from the federal Breeding Bird Survey (BBS) for the Merlin were unreliable for Minnesota but also for every region, state, and province. The trend estimate with the highest mean number of detections was from all routes completed in Canada, but it was also unreliable. However, at minimum, the Canadian trend illustrated the increase in the population of the species that has been documented by many other data sets. The Canadian trend indicated a nonsignificant increase of 2.64% per year from 1966 to 2015 (Figure 5). Partners in Flight (Rosenberg et al. 2016) estimated that Merlin populations have increased by more than 200% from 1970 to 2014!

Migration counts at Hawk Ridge, in Duluth, Minnesota, also increased significantly from 1974 to 2016 by 7.22% per year, although the recent counts from 2006 to 2016 are stable (Figure 6). The increase in the number of migrants since the mid-1980s is especially striking and corresponds with the BBS data. 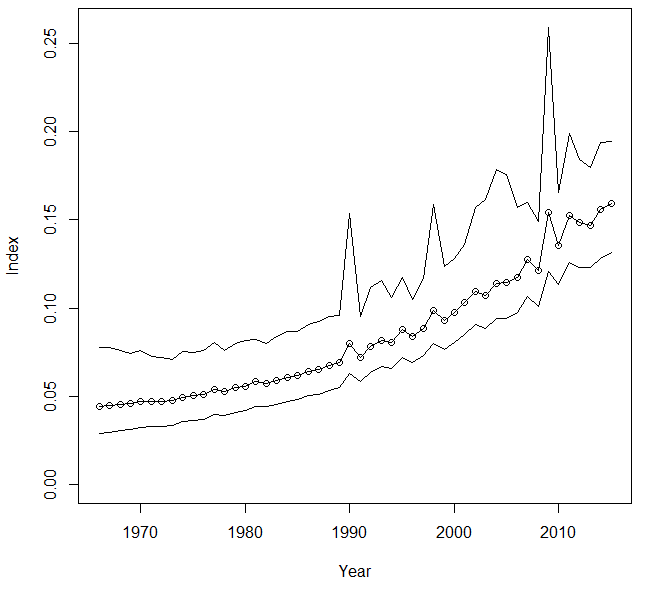 Breeding population trend for the Merlin in Canada for 1966–2015 based on the federal Breeding Bird Survey (Sauer et al 2017). 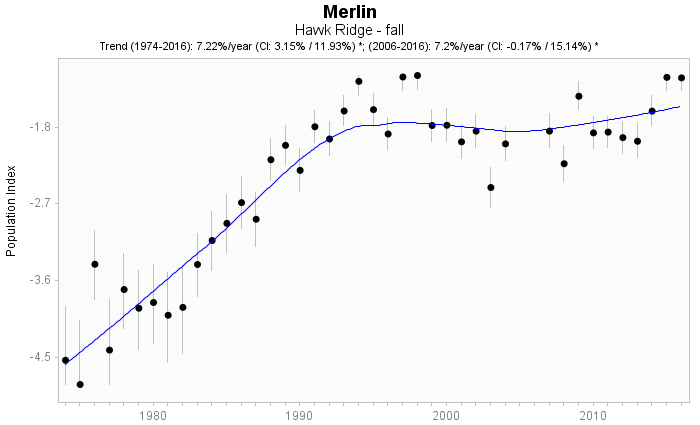 Fall migration counts of the Merlin  at Hawk Ridge, Duluth, Minnesota, as calculated by the Raptor Population Index from 1974 to 2016.

The Merlin has had a highly variable population history over the past 100 to 150 years, but currently its population is very healthy, at least compared with its past. The Continental Concern Score for this species is very low, at 7/20 (Rosenberg et al. 2016). The primary reason for its low score is its wide distribution and increasing population.

Roberts, based on his early experiences with this species, would be surprised at the Merlin’s current distribution and perhaps cautious. He warned that “if it were common it would be, despite its small size, a serious menace to bird-life, both wild and domesticated.” Current evidence suggests this worry is unwarranted. The species preys on birds, primarily on the most common species, including many exotic House Sparrows, within its home range (Warkentin et al. 2005). Warkentin et al. listed no domesticated organisms in their summary of the Merlin diet. In contrast, Chartier et al. (2013) was concerned with population declines in migratory passerines and the availability of adequate food supplies, which might affect the nest productivity of Merlins.

Overall, the Merlin is considered to be stable and not currently at risk. In the past, shooting was a problem and may continue to be. Warkentin et al. (2005) reported that shooting Merlins was still known in Alberta and Saskatchewan. This threat continues in some of its wintering grounds in Central and South America. The Merlin was added to the United States and Mexico Migratory Bird Treaty in 1972 (Evans 1982).

Causes of mortality are unclear. Warkentin et al. (2005) reported that of 88 Merlin deaths in Saskatoon, 43% were from collisions, 7% from shooting, 2% from poisoning, 2% from cat predation, 1% from weather, and 45% unknown. Information on mortality during migration due to collisions with windows, towers, or wind turbines is largely unknown. The greatest threat to Merlins may be from climate change. Lantham et al. (2015) and the National Audubon Society (2015), in their review of bird species susceptible to climate change, predicted a 97% loss of the species’ current summer range over the next 80 years. They labeled the Merlin as “climate endangered” but acknowledged that even in the face of climate change, the species’ salvation may be its recent success in cities, towns, and urbanized landscapes.