A regular breeding resident and migrant in Minnesota. Nashville Warblers were an abundant species during the Minnesota Breeding Bird Atlas (MNBBA).

Two subspecies are found in separate distinct breeding populations: one (Oreothlypis ruficapilla ruficapilla) in the northeastern and upper midwestern United States and Canada, and the other in the western United States and Canada (O. r. ridgwayi). Highest densities are found in northeastern Minnesota but also are substantial in the Canadian provinces of Ontario and Quebec (Figure 1).

Assigned a Continental Concern Score of 9/20 by Partners in Flight; identified as a stewardship species by Audubon Minnesota.

Long-distance migrant that overwinters in southern Texas, Mexico, and south as far as Panama; casual winter visitor in the Caribbean.

On the ground in thick foliage or moss hummocks. 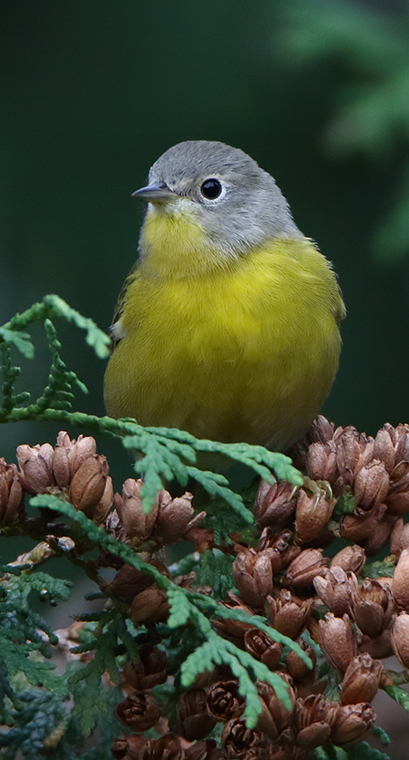 Breeding distribution and relative abundance of the Nashville Warbler in North America based on the federal Breeding Bird Survey from 2011 to 2015 (Sauer et al. 2017).

The Nashville Warbler is historically described as breeding throughout the forested part of the state, especially in the tamarack swamps and the mixed tamarack and spruce swamps (Roberts 1932). During Roberts’s (1932) time in Minnesota, from the late 1800s to the early 1900s, the species was “sparingly” found in Hennepin and adjacent counties “in and about the numerous large tamarack swamps, but since these have been largely cut off or drained, it has disappeared as a nesting bird.” Roberts then reported the breeding range as confined almost entirely to the Canadian Zone, from northern Isanti County on the south, and as far west as the evergreens extended. He documented breeding activity at seven locations, and all were in tamarack and spruce swamps. They included Aitkin, Becker, and Itasca Counties, plus at Cass Lake, Leech Lake, Itasca Park, and Mille Lacs.

The Minnesota Biological Survey (MBS) recorded 2,078 breeding season locations during their inventories of counties in the state. Their locations also were dominated by those in northeastern and north-central Minnesota but included breeding observation locations throughout the northwestern counties, including Kittson, Mahnomen, Marshall, and Polk Counties. Observations were also made southwest to Douglas and Otter Tail Counties, and south to Anoka, Chisago, Stearns, and Washington Counties.

The MNBBA further documented the extensive distribution and abundance of the Nashville Warbler in the forested regions of Minnesota but also the struggle to confirm nesting activity (Figure 2). The difficulty in finding nests of this species was a point noted also by Roberts (1932) and many regional breeding bird atlases. A total of 4,370 breeding records of this species were gathered during the MNBBA. The ratio of blocks with confirmed nesting to all the other observations was only 7% (104 confirmed blocks to 1,529 blocks where the species was recorded) (Figure 3; Table 1). The MNBBA extended confirmed nesting of the Nashville Warbler to northwest Minnesota, including Marshall, Pennington, and Roseau Counties, and south to Hennepin, Morrison, and Washington Counties. In addition, nesting was confirmed in the east-central region in Carlton and Pine Counties.

It is unknown whether the Nashville Warbler has declined in abundance, but Roberts (1932) noted that its range had contracted from the southern portions of its former range in Minnesota due to the loss of forests, especially large tamarack swamps. In Minnesota the species is found more commonly in coniferous forests than deciduous forests. It also responds positively to successional stages in forests following disturbances such as fire, logging, and wind (Pfannmuller 2012). Coniferous forests and forests where there have been disturbances are found primarily in the northeastern, northern, and north-central portions of the state.

The infrequent encounter of this species by early explorers suggests that its population may have expanded more recently. During the 20th century, Minnesota was increasingly cleared of mature upland forests, especially in the northern portions of the species’ breeding range. Cadman et al. (1987) similarly concluded that the species had benefited in Ontario from extensive clearing and lumbering operations during the past century. In contrast, extensive development of farmland in the southern portions of the province may have led to local extirpation of its breeding population. Lowther and Williams (2011), in their review of the Nashville Warbler in North America, cited evidence that the species became far more widespread in the early and mid-1800s in New England but then declined again in numbers and contracted its range when forests regrew in the late 19th and early 20th centuries.

The documentation of nesting in Hennepin, Morrison, and Washington Counties is likely due to a combination of (1) a more liberal definition of confirmed nesting used in breeding bird atlas accounts compared with those used by the Minnesota Ornithologists’ Union, and (2) the expanded and more intensive coverage of nesting activity by the MNBBA. It is possible that small populations have always existed in these more southerly locations, but they are likely to be more variable and not present every year. 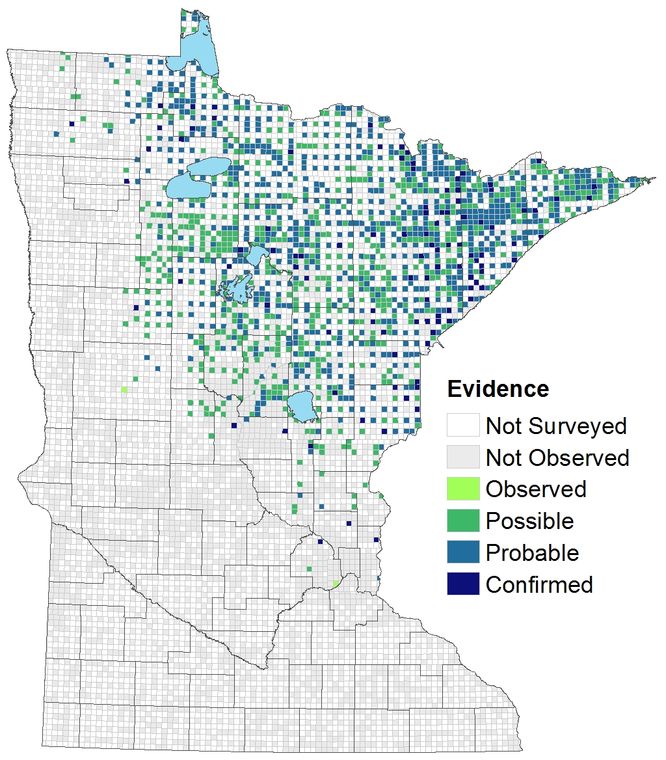 Breeding distribution of the Nashville Warbler in Minnesota based on the Breeding Bird Atlas (2009 – 2013).

Summary statistics of observations by breeding status category for the Nashville Warbler in Minnesota based on all blocks (each 5 km x 5 km) surveyed during the Breeding Bird Atlas (2009-2013).

Summary statistics for the Nashville Warbler observations by breeding status category for all blocks and priority blocks (each 5 km x 5 km) surveyed during the Minnesota Breeding Bird Atlas (2009-2013).

Roberts (1932) stressed the affinity of the Nashville Warbler for tamarack and spruce swamps, but he also found the warbler “less commonly, in second growth and heavy timber on the uplands.” The species is widely distributed in many different forest cover types and can be ubiquitous in early-successional, intermediate, and mature forests (Figure 4). The National Forest Bird (NFB) monitoring program in the Chippewa and Superior National Forests reported its highest densities in black spruce–tamarack cover types (Niemi et al. 2016).

The Nashville Warbler was one of the most abundant species in extensive counts in the Agassiz Lowlands Ecological Subsection of northern Minnesota. It occurred in virtually all age classes of lowland coniferous forests, including white cedar, tamarack, and black spruce (Bednar et al. 2016). The MNBBA data gathered during point counts also illustrated the high variability of this species’ habitat use (Figure 5). Most detections were made in bog habitats and in upland and lowland coniferous forests, but mixed deciduous-coniferous forests, pine forests, and shrub wetlands also were commonly used.

Lowther and Williams (2011) noted the species’ use of second-growth, open deciduous, and mixed-species forests, preferably with shrubby undergrowth. Cutright et al. (2006) suggested that a common denominator among these habitats “appears to be dense ground cover for nesting,” but canopy cover can vary widely. They also highlighted that spruce and tamarack lowlands are reliable places to find the species.

Across its geographic range, the Nashville Warbler can be found in many different habitats, but the summer distribution maps from the federal Breeding Bird Survey (BBS) show that northeastern Minnesota has among the highest breeding densities in North America (Figure 1). That a high proportion of its breeding population occurs in Minnesota is a factor identified by Audubon Minnesota (Pfannmuller 2012) in its selection of the Nashville Warbler as a stewardship species. 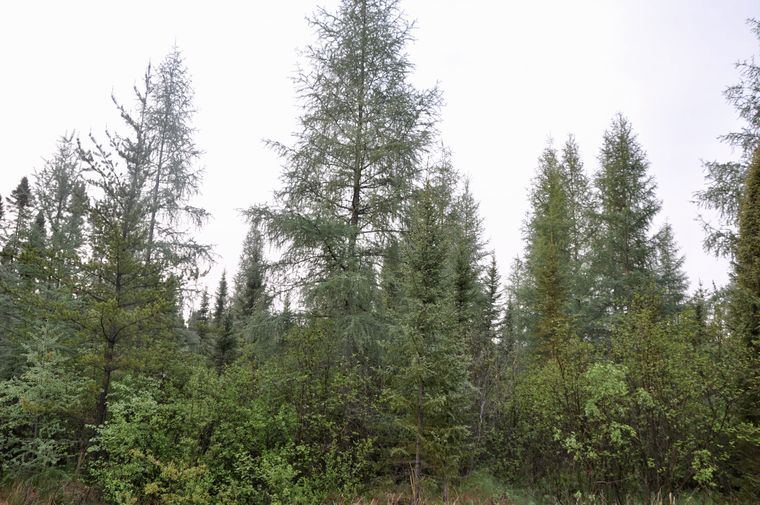 Habitat profile for the Nashville Warbler based on habitats within 200 m of point counts where the species was present during the Minnesota Breeding Bird Atlas (2009-2013).

BBS trends from 1967 to 2015 for the Nashville Warbler indicated a stable population in Minnesota (Figure 6). Trends were also stable in Ontario but significantly increasing in Michigan (1.77% per year) and in Wisconsin (1.48% per year) over the same time frame. Trends as estimated by the NFB monitoring program from 1995 to 2016 were significantly increasing in the Chippewa and Superior National Forests by a similar amount, ranging from 1.43% to 1.52% per year (Figure 7). 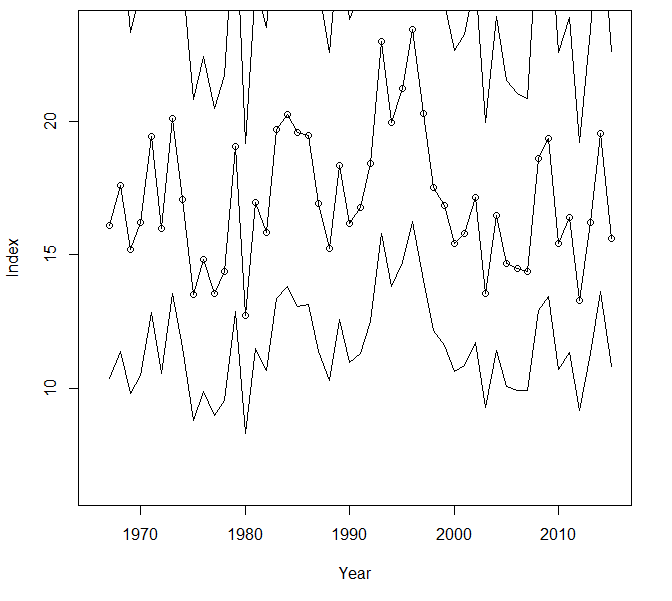 Breeding population trend for the Nashville Warbler in Minnesota for 1967–2015 based on the federal Breeding Bird Survey (Sauer et al. 2017). 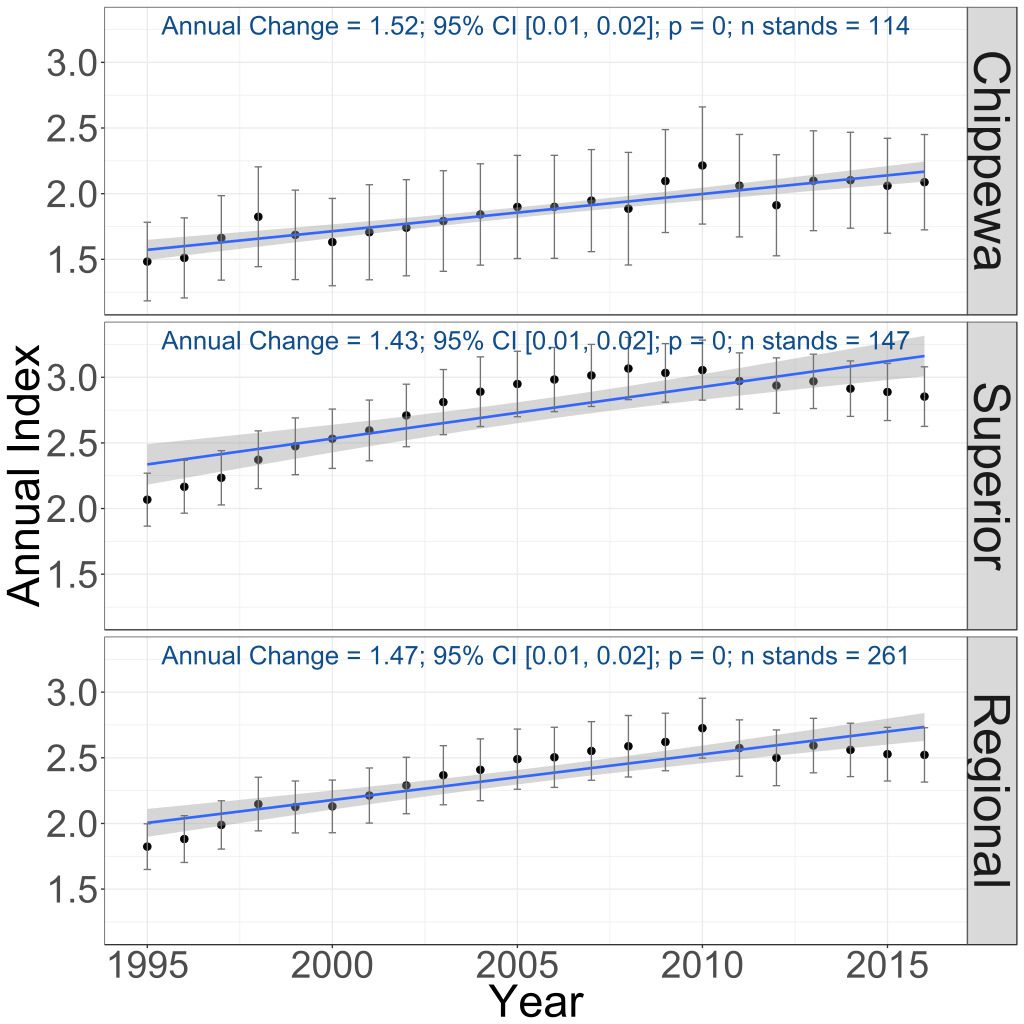 Breeding population trends of the Nashville Warbler in the Chippewa and Superior National Forests and the combined regional trend, 1995–2016 (Bednar et al. 2016).

The recent Partners in Flight (Rosenberg et al. 2016) Continental Concern Score of 9/20 indicated that the Nashville Warbler is not a conservation priority. Lowther and Williams (2011) also maintained that it was of low priority for management because it readily adapts to second-growth and cutover areas.

The Nashville Warbler’s status as a stewardship species is warranted because greater than 5% of its global breeding population and a high proportion of its breeding range occur in Minnesota. As previously noted, this species may be more common today in Minnesota because it readily accepts recently disturbed forests, such as those resulting from logging, forest fire, and wind. Schulte and Niemi (1998) found that Nashville Warblers were significantly more abundant in recently logged areas compared with similar areas that were recently burned. Zlonis and Niemi (2014) found that Nashville Warblers were equally abundant in managed and wilderness forests in the Superior National Forest of northern Minnesota.

Other factors that have been identified as affecting the species’ populations include climate change, collision with man-made structures (towers and windows), and ground predators of nests (Lowther and Williams 2011). Loss et al. (2014) listed the species as vulnerable to collisions with windows in residences of one to three stories tall. They estimated that this species’ risk was 22.6 greater than the risk to an average bird.

Langham et al. (2015) and the National Audubon Society (2015) labeled the Nashville Warbler as “climate threatened” in their review of climate sensitivity. They projected that 50% of its current summer breeding range will be lost and shifted northward by 2080. If this occurs, then the two subspecies are likely to converge in their new northern breeding range, which may also answer the question of whether these two subspecies are separate species.