A regular breeding resident and migrant in wet sedge and grasslands in northwestern and northcentral Minnesota. The Nelson’s Sparrow was rare during the Minnesota Breeding Bird Atlas (MNBBA).

This subspecies has a restricted breeding range from Minnesota and South Dakota to northwestern Alberta, with the highest densities in North Dakota (Figure 1).

Assigned a Continental Concern Score of 14/20 by Partners in Flight and designated a Watch List species. It is also designated by the Minnesota Department of Natural Resources as a Species in Greatest Conservation Need.

Short-distance migrant that overwinters in marshes along the Atlantic and Gulf Coasts.

Cup nest on or near the ground, often partly or fully domed. 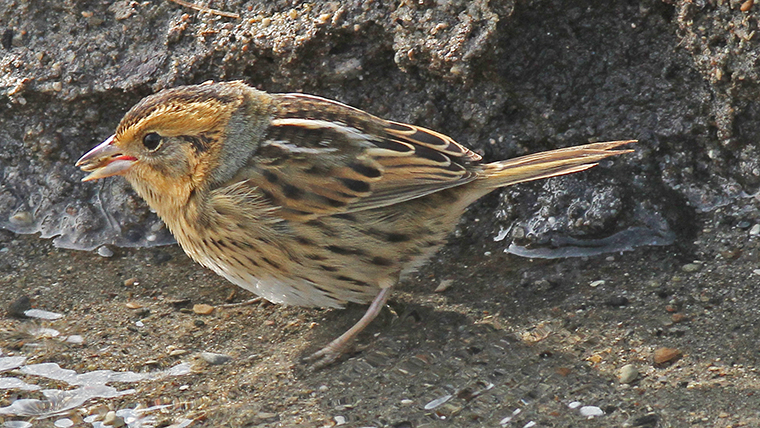 Breeding distribution and relative abundance of the Nelson’s Sparrow in North America based on the federal Breeding Bird Survey from 2011 to 2015 (Sauer et al. 2017).

Roberts (1932) described the Nelson’s Sparrow as a summer resident that breeds in northwestern Minnesota, but he emphasized the possibility of nesting throughout the southern portion of Minnesota as well. He documented many reports from the southern and western portions of the state (e.g., Blue Earth, Dodge, Hennepin, Isanti, Jackson, Lac qui Parle, Lincoln, Norman, Otter Tail, Renville, and Waseca Counties), but all except a June observation in Blue Earth County were in April, May, July, and September. Therefore, most could have been migratory birds. June observations were also recorded in northwestern Minnesota in both Marshall and Kittson Counties, though only a nest with three eggs was confirmed in Kittson County. According to Breckenridge (1930), the nest was found in a very wet, boggy marsh and only after a considerable effort on June 21, 1929.

Green and Janssen (1975) emphasized that the species only resides in the northwestern region of the state. They included confirmed nesting in Kittson County and inferred nesting in Clay, Mahnomen, and Marshall Counties. Janssen (1987) noted that until 1974 it was presumed restricted to northwestern Minnesota from Clay to Kittson Counties. However, he points out new potential nesting activity of the Nelson’s Sparrow in Minnesota as follows: 1) a nest found by Burt (1978) during a “week-long search for Yellow Rail nests” in late June at the McGregor Marsh in Aitkin County, 2) observations during the breeding season in western Roseau and Pennington Counties by Eckert (1980) in surveys of prairie tracts, and 3) observations during the 1982 nesting season in Becker, Cass, and Polk Counties. Janssen (1987) and Hertzel and Janssen (1998) identified Aitkin and Marshall Counties as the only two counties where confirmed nests have been found since 1970.

The MNBBA included breeding records from 58 blocks with a similar but not quite as extensive breeding range as indicated by the MBS (Figure 2). Probable breeding was recorded in Roseau County in the northwest, the counties of Clay, Polk, and Wilkin in the west, and Cass County to the east (Figure 3; Table 1). Most of the remaining breeding observations were of possible nesting (81.0%, 47/58) in Aitkin, Becker, Beltrami, Crow Wing, Grant, Kittson, Lac qui Parle, Pennington, Pope, Red Lake, and Wadena Counties. No confirmed nests were found.

The collective evidence from these observations suggest the Nelson’s Sparrow is more widely distributed in Minnesota than previously thought. Yet its distribution is sparse and localized in wet meadows and marshes—often in relatively large complexes that are difficult to access. Breckenridge’s (1930) description of the nest he found was in a marsh in Kittson County “two square miles in extent.” The description by Burt (1978) of the nest he found in the extensive McGregor Marshes of Aitkin County was in knee-deep water and hidden under a tuft of grass. Both amply illustrate the challenges of finding nests or even observing the species.

The Manitoba breeding bird atlas identified numerous confirmed, probable, and possible nesting in the southern and southeastern part of the province. The federal Breeding Bird Survey (BBS) indicated the highest densities are found in central North Dakota (Figure 1). Cutright et al. (2006) confirmed nesting in Wisconsin at Crex Meadows in Burnett County in 1999, a place where many summer observations had been previously recorded. In addition, one probable nesting was also recorded from Vilas County in extreme northern Wisconsin. This species should be sought in large sedge and grass meadows throughout Minnesota. Visual identification can be a challenge in these habitats, and its faint song is frequently only vocalized at night. In his review of the Nelson’s Sparrow in North America, Schriver et al. (2011) does not suggest any changes in the species’ historical breeding distribution, except to suggest a southern extension along the Atlantic Coast of the A.n. subvirgatus subspecies maritime population in northeastern North America. 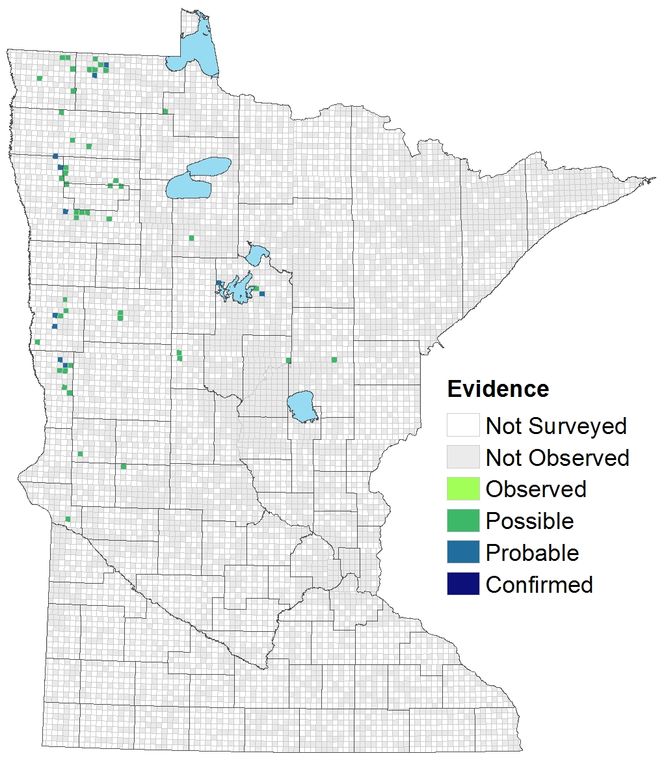 Breeding distribution of the Nelson's Sparrow in Minnesota based on the Breeding Bird Atlas (2009 – 2013).

Summary statistics of observations by breeding status category for the Nelson's Sparrow in Minnesota based on all blocks (each 5 km x 5 km) surveyed during the Breeding Bird Atlas (2009-2013).

Summary statistics for the Nelson's Sparrow observations by breeding status category for all blocks and priority blocks (each 5 km x 5 km) surveyed during the Minnesota Breeding Bird Atlas (2009-2013).

The habitat preferences of the three subspecies of Nelson’s Sparrow were described by Schriver et al. (2011) as all different and distinctive. He described the subspecies, A.n. nelsoni, which occurs in Minnesota as breeding in “freshwater marshes of the prairie pothole region” where “cordgrass, sedges, and Phragmites are common.” Hanowski and Niemi (1990) summarized the qualitative descriptions of breeding habitat for this species as bulrush wetlands, extensive marshy areas with cordgrass (Spartina pectinate), and wet boggy marshes (Krapu and Green 1978; Rolfe 1899). The North Dakota State Wildlife Action Plan (2015) emphasized freshwater wetlands with dense, emergent vegetation or damp areas with dense grass. They also emphasized the use of fens, wet meadows, lake margins, emergent cattails, native prairie, and idle fields as preferred habitats.

Two of the most consistent places in Minnesota where the Nelson’s Sparrow has been found, the Agassiz National Wildlife Refuge in Marshall County and the McGregor Marshes in Aitkin County, were sampled for vegetation characteristics (Hanowski and Niemi 1990). Both of these areas consisted of large wetland complexes and were many square kilometers in extent (Figure 4). The authors found the following mean values within territories of the species from both sites: vegetation height = 122 cm, water depth = 12 cm, density of grasses-sedges = 182 per m2, and density of forbs = 17 per m2. Overall, the Nelson’s Sparrow was found in more open areas with lower densities of cattails and shrubs compared with the Yellow Rail and American Bittern, which were also studied. The Yellow Rail was more similar in its breeding habits with the Nelson’s Sparrow than the American Bittern. 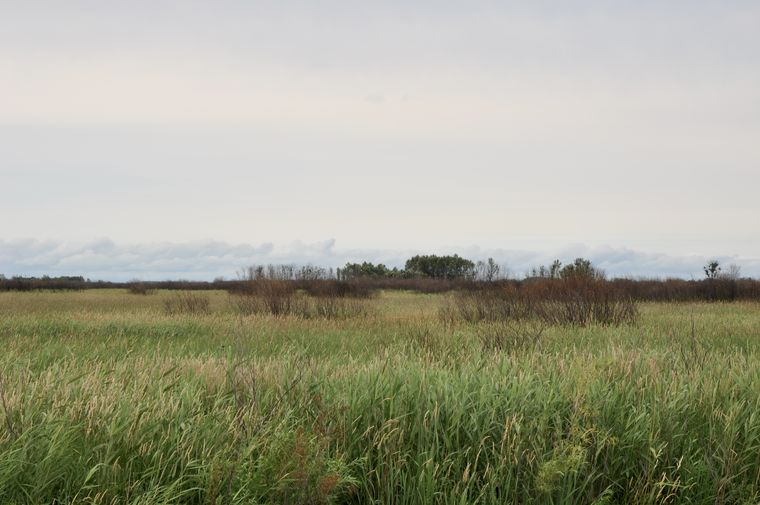 Partners in Flight (Rosenberg et al. 2016) estimated a North American breeding population of 1 million breeding adults. Due to its rarity, population estimates were unreliable for Minnesota. BBS trends in Minnesota, North Dakota, and survey-wide were also unreliable for this species. Even though the BBS shows a high relative abundance of the Nelson’s Sparrow in North Dakota, Dyke et al. (2015) only estimated a population of 150,000 adults. Schriver et al. (2011) emphasized that Nelson’s Sparrow populations “are highly localized and variable in size” and that “microhabitat variability (favored nest-sites), social factors and perhaps recruitment problems may produce a patchy, uneven dispersion.”

The Minnesota Department of Natural Resources (2015) listed the species as a Species in Greatest Conservation Need because of its low population and vulnerability to declining wetland habitat. It is designated as a Yellow Watch List species by Partners in Flight (Rosenberg et al. 2016), indicating the species is “not declining, but vulnerable due to small range or population and moderate threats.” They identified the primary threats to the species as climate change, agriculture, and urbanization. The species is also ranked fourth by Arnold and Zink (2011) as a “super collider” with buildings. They documented 44 mortalities with buildings, or 25 times more collisions than the average bird. Given the rarity of this species, it is alarming that any individuals would even be detected colliding with buildings.

Schriver et al. (2011) emphasized that “destruction of coastal marshland and drainage of inland grassland and conversion to agriculture” has resulted in acute loss of breeding habitat across much of its range. Subsequently, they reinforced that protection of extensive, undisturbed marshland habitat and interior grasslands is critical to maintaining stable populations.

As mentioned previously, North Dakota potentially has a high proportion of the sparrow’s breeding population. Its State Wildlife Action Plan (Dyke et al. 2015) suggested the following to encourage or recruit greater numbers of the species: 1) limiting removal of suitable breeding habitat by burning or mowing, 2) increasing ground cover where short grasses are found, and 3) emphasizing the need to follow the guidance for construction of communication towers to reduce negative effects on this species.

Partners in Flight (Rosenberg et al. 2016) identified several Joint Venture regions with major responsibilities for conservation of the western subspecies of the Nelson’s Sparrow that occurs in Minnesota. These included the Prairie Pothole Joint Venture region that contains the western grasslands and prairie regions of Minnesota, now primarily converted to agricultural areas. Within this region, the Nelson’s Sparrow, albeit a Yellow Watch List species, is not designated as a species of urgency because of greater concern for many other species, such as the Chestnut-collared Longspur, Sprague’s Pipit, and the Grasshopper Sparrow; the former two are designated as endangered species in Minnesota. Yet the Nelson’s Sparrow will likely benefit by the objective to conserve the region’s wetland habitats.

Langham et al. (2015) and the National Audubon Society’s (2015) analysis of climate change impacts designated the Nelson’s/Saltmarsh Sparrow (Sharp-tailed Sparrow) complex as “climate endangered.” Even though this analysis projects potential expansion northward of the species’ winter range, this projection is complicated by the potential loss of saltmarsh areas with rising sea levels. The summer range is not considered in these climate models but is based on species with similar habitat, such as the LeConte’s and Baird’s Sparrows; its summer range may have a “substantial shift in appropriate climate space” to the north.

The lack of data on this species’ population and trends makes the overall status of the Nelson’s Sparrow precarious. More is known about its distribution in the state because of efforts by the MBS and the MNBBA. Its breeding distribution is larger than previously thought, but little is known about its nesting productivity. Fortunately, this secretive sparrow has persisted in the state, despite extensive habitat losses. It deserves more extensive study, but such studies will not be easy given its low detectability and challenging breeding habitat.