A regular but rare permanent resident; the Northern Hawk Owl was rare during the Minnesota Breeding Bird Atlas (MNBBA).

A Holarctic species, the Northern Hawk Owl occurs sparsely from the Maritime provinces in eastern Canada across the boreal forest to Alaska. In the United States, its southern limit occurs in northern Minnesota, northern Wisconsin, and northern Michigan, and occasionally in the Rocky Mountains.

Irruptive movements to more southern regions regularly occur and are thought to be responses to prey availability and climate.

Primarily small mammals and birds, the latter especially in winter.

In cavities of decayed trees and in broken tops of trees, stumps, and vacant woodpecker holes. 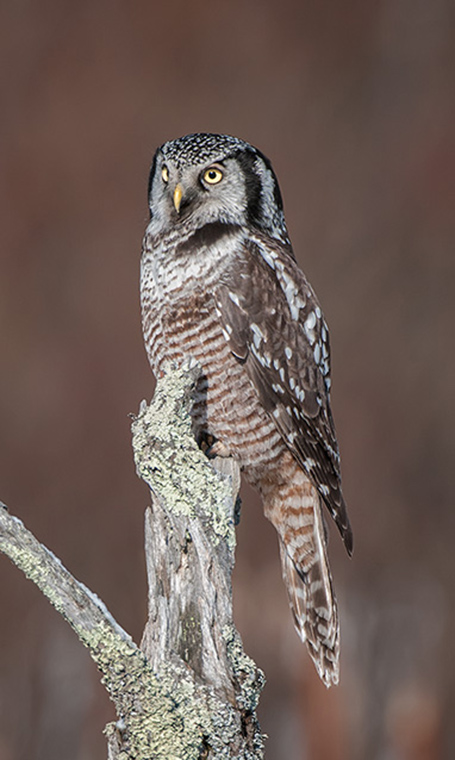 Hatch (1892) stated that the American Hawk Owl, as he knew it, ventured into Minnesota primarily in the winter. However, in a post note he said, “The Hawk Owl has come under my eye so often since writing the foregoing, that I cannot regard it as really rare any longer. I have met with them in November three times in eight years, within seven miles of Minneapolis, and found several in the taxidermists’ collections during the same period.”

Roberts (1932) did not describe the Northern Hawk Owl as a nesting species in Minnesota. He said it was a “winter visitant from the north, chiefly in the northern and eastern parts of the state.” Roberts included several observations of potential nesting of the species in Minnesota from April to June, but disregarded the observations as “not conclusive and may have resulted from errors in identification.” The observations included secondhand information from a “reliable” source of a nest near Ada in Norman County in 1884; possible nesting in Roseau County in 1906, Cook County in 1923, Koochiching County in 1927, and Itasca County in 1928; and several late spring observations, one as far south as St. Paul on May 21, 1925. No additional information was added in Roberts’s 1936 revision.

Green and Janssen (1975) labeled the Northern Hawk Owl as a “casual summer resident.” They noted that after major invasions a few birds remained during the summer, and breeding has been reported from Norman, Roseau, and St. Louis Counties. The latter was described by Strnad (1963) as six individuals, including a possible nesting pair and four young, in July 1962. The report by Strnad was from the area now known as the Sax-Zim Bog and was instrumental in initiating the current attraction of the area to nature enthusiasts. The Northern Hawk Owl nesting observation also corresponded with two nests that were found in northwestern Wisconsin (Douglas County) in April 1963 (Robbins 1991). These nesting observations followed the invasion year of 1962–1963, in which over 100 birds were observed in Minnesota as far south as Wabasha County (Green 1963).

In 1982, Johnson summarized 4 nesting records for the Northern Hawk Owl and identified those records as accidental nesters. He included a nest with eggs in Roseau County from the summer of 1906 as a confirmed nest record, one about which Roberts had his doubts. Johnson also included the nesting record from the spring of 1884 in Ada, Minnesota, but like Roberts he had reservations because the habitat did not seem appropriate. Johnson cited 10 additional summer observations of the species from 1905 to 1963. The other two nest records he cited were both from 1980 and are considered solid: the first Minnesota nesting record by Steve Loch in Aitkin County and the second by Martin Kehoe in Lake of the Woods County.

Janssen (1987) reiterated that nesting seemed to occur following major invasion years. He included the 2 nests reported by Johnson in Aitkin and Lake of the Woods Counties, but no new records were added in his summary of confirmed nests since 1970. Hertzel and Janssen (1998) would later add two additional confirmed county nesting records since 1970 in Lake and Roseau Counties.

Grosshuesch (2008) summarized that the Northern Hawk Owl has been documented breeding after 6 of the past 11 irruptions and only twice in non-irruption years. He also stated that in the years before the major 2005–2006 irruption, nesting had been confirmed at 14 sites, which included 9 active nests and 5 sites with short-tailed young. These occurred in 7 counties, including Aitkin, Cook, Koochiching, Lake, Lake of the Woods, Roseau, and St. Louis.

The MNBBA participants included 23 records of the Northern Hawk Owl, all of which come from 5 counties: Aitkin, Lake, Lake of the Woods, Roseau, and St. Louis (Figure 1). Records were included from 0.5% (23/4,735) of the surveyed atlas blocks and 0.5% (12/2,337) of the priority blocks (Figure 2; Table 1). No observations were made in other counties with potentially suitable habitats, such as Beltrami, Cook, Itasca, or Koochiching.

Overall, the breeding status of the Northern Hawk Owl in Minnesota is elusive. The prevailing wisdom has been that breeding primarily occurs after invasion years, but nests have been found after noninvasive years. The MNBBA results confirmed nesting in 5 counties following noninvasive years. It remains a possibility that a small population in Minnesota may nest most years or every year in the remote forests and peatlands. Unfortunately, it would require a massive long-term search effort to definitively determine the regular breeding status of this species in the state.

In their review of the Northern Hawk Owl in North America, Duncan and Duncan (2014) stated the species was one of the least-studied birds in North America. They emphasized that few data were available to determine any historical changes in the distribution of the species. Furthermore, the authors suggested the Northern Hawk Owl may have historically nested in places like Minnesota, and recent nesting did not necessarily represent extensions of its breeding range. 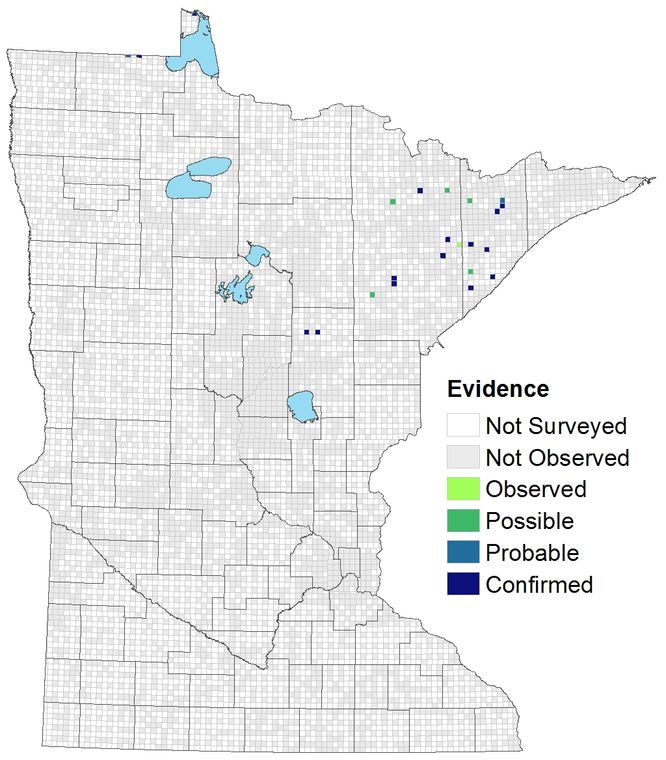 Breeding distribution of the Northern Hawk Owl in Minnesota based on the Breeding Bird Atlas (2009 – 2013).

Summary statistics of observations by breeding status category for the Northern Hawk Owl in Minnesota based on all blocks (each 5 km x 5 km) surveyed during the Breeding Bird Atlas (2009-2013).

Summary statistics for the Northern Hawk Owl observations by breeding status category for all blocks and priority blocks (each 5 km x 5 km) surveyed during the Minnesota Breeding Bird Atlas (2009-2013).

The most detailed study of Northern Hawk Owl nesting in Minnesota was completed by Grosshuesch (2008, 2009), who found 9 Minnesota nesting sites in 2006 and an additional 41 nesting locations from Minnesota to Alberta between 1998 and 2006. A total of 91% of the nests were found in dead trees and 87% were found in open areas; no nests were greater than 40 m from an opening. The openings were primarily from forest fires and logging and contained large-boled trees for nesting sites (Figure 3).

Duncan and Duncan (2014) also described the species’ typical nesting habitat as moderately dense coniferous or mixed coniferous-deciduous forests bordering marshes or other areas cleared by fire or logging. Both forest fires and logging provide open habitats for hunting small prey, especially if suitable perches and especially snags of burnt- or rotted-out cavities are available for nesting sites. Hannah and Hoyt (2004) suggested that burned-over sites are most suitable for up to eight years after a fire and before an extensive shrub layers develops. 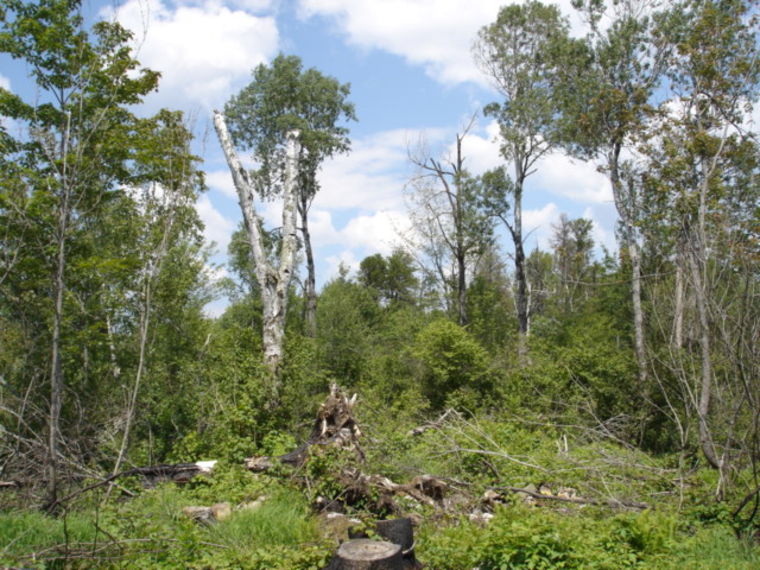 Partners in Flight estimated a total U.S. and Canadian population of 60,000 breeding adults, with approximately 30,000 in the United States (Partners in Flight 2017), primarily in Alaska. Environment Canada (2011) estimated a Canadian population of 5,000 to 50,000 adults. There are no breeding population estimates for Minnesota, but the species clearly has a very low population, one that varies considerably from year to year. The species is very sparsely distributed even after winter irruptions. One of the few population density estimates available is from the Yukon, which indicated 0 to 6 pairs per 100 km2 (Rohner et al. 1995).

The federal Breeding Bird Survey (Sauer et al. 2017) does not provide an estimate of the species’ population trend because it is too rare, but Environment Canada (2011) suggested that the species has had a large increase since the 1970s, primarily based on the Christmas Bird Count. The organization’s estimates were acknowledged as having low reliability.

The Northern Hawk Owl has a relatively high Conservation Concern Score of 11/20, which is primarily based on the species’ low overall population. The species does not have an official conservation status in Minnesota or in the United States. Duncan and Duncan (2014) summarized that it is considered to be “not at risk” in Canada and “globally secure.” They also described that the Northern Hawk Owl is considered a “sensitive or vulnerable species” in the Canadian provinces of Alberta, Saskatchewan, and Quebec. Dunn (1997) ranked it as 85 of 297 among birds in Canada and of medium concern in conservation priority.

Threats to the species include some vulnerability to shooting, because it is diurnal and bold and uses exposed perches. It has been documented as vulnerable to fur trapping and collisions with vehicles, trains, and transmission lines (Duncan and Duncan 2014).

The species benefits from forest fires and logging disturbances, especially if the latter include the availability of snags and appropriate perches. Sonerud (1997) suggested that perches at least 9 m high create an effective searching radius of at least 70 meters, which can improve its hunting success. In Fennoscandia, the species has also used nest boxes.

Like all of the boreal nesting species observed in Minnesota, Langham et al. (2015) and the National Audubon Society (2015) estimated that the Northern Hawk Owl was “climate endangered” in its climate modeling of nearly 500 species. More specifically, its models predict a 100% loss of the species’ current summer range and a 77% loss of its current winter range by 2080.

Without question, more data are needed on the status and ecology of the Northern Hawk Owl in Minnesota and throughout its range in North America. The species is listed as one of America’s “100 most wanted” species to be observed by birders and wildlife enthusiasts, and Minnesota is the best place in the continental United States to see this species (Mlodinow and O’Brien 1996). There are many challenges and threats in the future if observations of this secretive and unusual “half owl–half hawk” bird are to remain a reality.