A regular breeding species and migrant; regular during the winter months at scattered open-water sites in central and southeastern Minnesota. A common species during the Minnesota Breeding Bird Atlas (MNBBA).

Found throughout the Western Hemisphere, in North America the Pied-billed Grebe is widely distributed across Canada and the United States. Birds that breed in the northern regions migrate south when temperatures drop and water basins freeze over; birds that breed farther south are year-round residents. The core of the species’ breeding range is in the Prairie Pothole Region of the northern Great Plains states and the Prairie Provinces of central Canada (Figure 1).

Assigned a Continental Concern Score of 8/20 by Partners in Flight and designated a species of High Concern by the North American Waterbird Conservation Plan.

Resident to short-distance migrant; birds in the northern regions, including Minnesota, usually migrate to the southern United States and northern Central America.

A floating platform constructed with aquatic vegetation and usually anchored to floating vegetation. 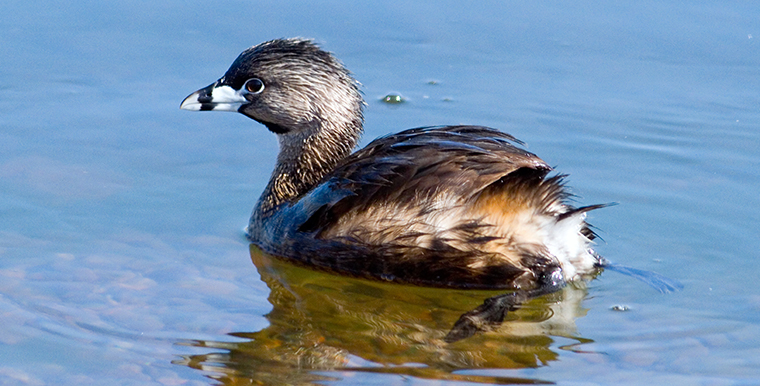 Breeding distribution and relative abundance of the Pied-billed Grebe in North America based on the federal Breeding Bird Survey from 2011 to 2015 (Sauer et al. 2017).

A common resident on many of Minnesota’s lakes and wetlands, Roberts’s account of the species in 1932 described the Pied-billed Grebe as an “abundant summer resident, breeding throughout the state wherever there are suitable water and marsh conditions.” He noted it was less common in the northeastern region, where shallow wetlands were replaced by “rock-bound lakes and rivers.” Unlike others of Minnesota’s diverse and abundant community of waterfowl species, the little Pied-billed Grebe seems to have gone largely unnoticed by the cadre of observers providing Roberts with frequent accounts of the distribution and abundance of waterfowl in the late 1800s and early 1900s. Nevertheless, the species was likely far more abundant in earlier times, prior to the loss of nearly 50% of Minnesota’s wetlands. Despite the species’ abundance and widespread distribution, Roberts compiled confirmed nesting records from just 7 counties that he and his colleagues frequently visited: Hennepin, Isanti, Jackson, Kittson, Marshall, Polk, and Stearns.

Forty years later, Green and Janssen (1975) described the species as a summer resident throughout the state. The exception, as in Roberts’s time, was the Arrowhead region, where its preferred marshland habitat was far less common. Janssen (1987) described it as a casual breeder in these northeastern counties and identified 57 counties across the state where breeding had been confirmed since 1970. Later Hertzel and Janssen (1998) added another 7 counties to that list.

Survey work conducted by the Minnesota Biological Survey identified 357 breeding season locations for the Pied-billed Grebe. The species was common throughout much of western Minnesota, but records were particularly scarce in the southeastern counties and in the northeast.

During the MNBBA, observers reported Pied-billed Grebes in 15.0% (716/4,769) of the surveyed atlas blocks and in 16.4% (384/2,337) of the priority blocks. Breeding was confirmed in 190 blocks (Figures 2 and 3; Table 1). The birds were reported from 85 of Minnesota’s 87 counties, absent only from Rock and Dodge Counties. Breeding evidence was gathered in 65 counties, including 1 record in far northeastern Cook County. Fourteen of the counties were additions to the list published by Hertzel and Janssen (1998).

Although there is no barometer of its former abundance in the late 1800s and early 1900s, the Pied-billed Grebe’s current breeding range appears remarkably similar to that described by earlier accounts. The core of its distribution is in central Minnesota, from Dakota and Washington Counties in the east, to Big Stone and Lac qui Parle Counties in the west, a region where productive shallow lake basins are prevalent. It remains scarce in the far northeast and north-central counties, particularly in Cook, Lake, and Koochiching counties, as well as in the far southeastern corner of the state. Elsewhere in its breeding range, there have been few major changes in the species’ overall distribution other than local responses to the loss of wetland habitat (Muller and Storer 1999). 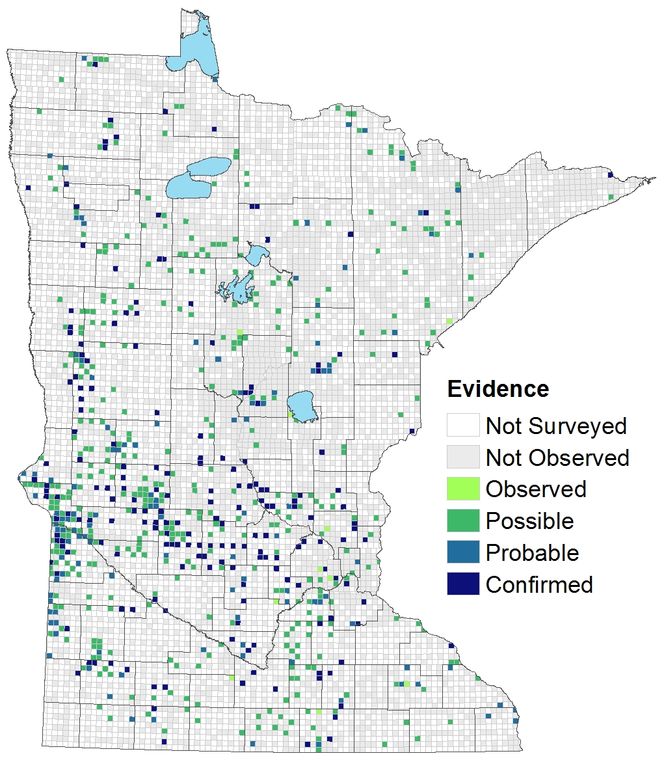 Breeding distribution of the Pied-billed Grebe in Minnesota based on the Breeding Bird Atlas (2009 – 2013).

Summary statistics of observations by breeding status category for the Pied-billed Grebe in Minnesota based on all blocks (each 5 km x 5 km) surveyed during the Breeding Bird Atlas (2009-2013).

Summary statistics for the Pied-billed Grebe observations by breeding status category for all blocks and priority blocks (each 5 km x 5 km) surveyed during the Minnesota Breeding Bird Atlas (2009-2013).

An inhabitant of small wetlands and shallow lakes, the Pied-billed Grebe tolerates a variety of landscapes, including agricultural, forested, and urban/suburban (Figure 4). In North Dakota, the heart of its breeding range, 91% of the breeding pairs were found on seasonal and semipermanent wetlands. In Minnesota, 88.5% were found on semipermanent and permanent ponds and lakes (Muller and Storer 1999).

The grebe’s principal nesting requirements include stands of emergent vegetation and access to open water. The latter enables a quick retreat from predators or other disturbances and provides open areas for this diving forager to feed. Water depths greater than 25 cm are preferred (Muller and Storer 1999). Stands of emergent vegetation are preferred for nesting, but nests are occasionally placed in open water, where they are free floating or anchored to floating vegetation, such as water lilies (Muller and Storer 1999). 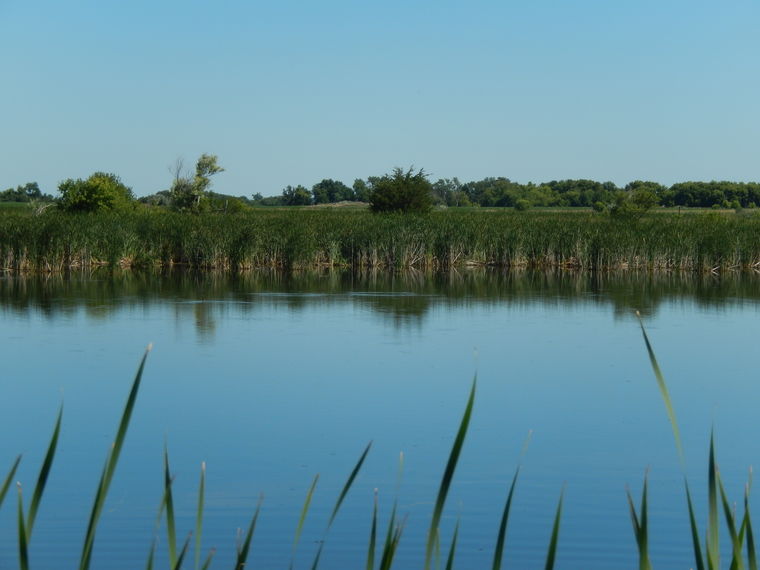 Typical breeding habitat of the Pied-billed Grebe in Minnesota (©Lee A. Pfannmuller).

Population data for the Pied-billed Grebe are scant; few intensive demographic studies have been conducted. Based on expert opinion, Wetlands International has estimated the global population to approximate 126,000 to 255,000 birds (Wetlands International 2015). The number seems small given the species’ broad distribution, but even winter totals from Christmas Bird Counts conducted from 2000 to 2015 only range from approximately 20,500 to 38,000 individuals (National Audubon Society 2015). A more recent assessment by Partners in Flight (2017) estimates the global population to number greater than 500,000 birds.

Despite its wide distribution, the Pied-billed Grebe is not an abundant species anywhere within its breeding range. The densest populations are located in the Prairie Pothole states of North and South Dakota and in the Canadian Prairie Province of Saskatchewan (Figure 1). In Minnesota, less than 1 grebe is observed on each Breeding Bird Survey (BBS) route in the state each year (0.5). This is higher than the national average of 0.3 birds but lower than averages observed in the heart of the Prairie Pothole Region. Yet even there their abundance is quite low, averaging 1 to 2 birds per route (Sauer et al. 2017).

Data regarding breeding densities at the site level are limited. In North Dakota’s prairie potholes, the number of pairs ranged from 1.3 per km2 to 12.2 per km2, depending on the type of wetland used. Numbers were actually lowest in permanent wetlands and highest in semipermanent wetlands and fens (Stewart and Kantrud 1972; Kantrud and Stewart 1984).

Although it is not a robust tool for monitoring wetland species, the BBS provides the only long-term monitoring data that document breeding population trends. Unfortunately, the species’ low relative abundance compromises the statistical analyses in most ecological regions, states, and provinces. The exceptions are the Prairie Pothole Region (which includes western Minnesota), the states of North and South Dakota, and Saskatchewan. In all four of these areas the data demonstrate wide fluctuations. In the Prairie Pothole Region, BBS data reveal a significant positive population trend, increasing an average of 2.43% since 1966 and 8.08% since 2005 (Figure 5). Populations in North and South Dakota show nonsignificant population increases; populations in Saskatchewan show a significant increase. Although data in Minnesota are not statistically reliable, they suggest a steady, downward trend. Survey-wide, the data suggest a stable to slightly increasing population (Sauer et al. 2017).

The only other long-term monitoring data set available for the grebe is collected by the National Audubon Christmas Bird Count. Counts conducted in the United States and Canada since 1966 corroborate the national breeding season trend of a stable to slightly increasing population (Figure 6).

Although this diminutive wetland inhabitant has not received as much attention as the waterfowl species it shares its habitat with, its population trend seems to mirror many of its co-inhabitants. At the national scale, populations are stable to increasing, but Minnesota populations are declining. 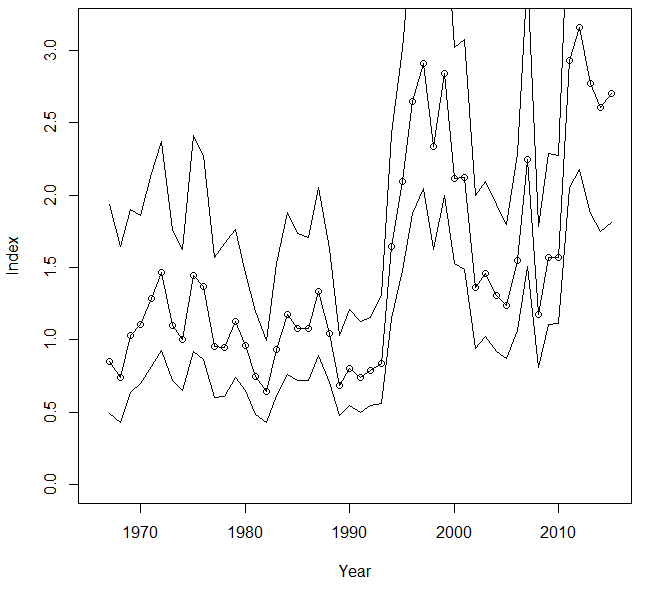 Breeding population trend of the Pied-billed Grebe in the Prairie Pothole Region for 1966–2015 based on the federal Breeding Bird Survey (Sauer et al. 2017). 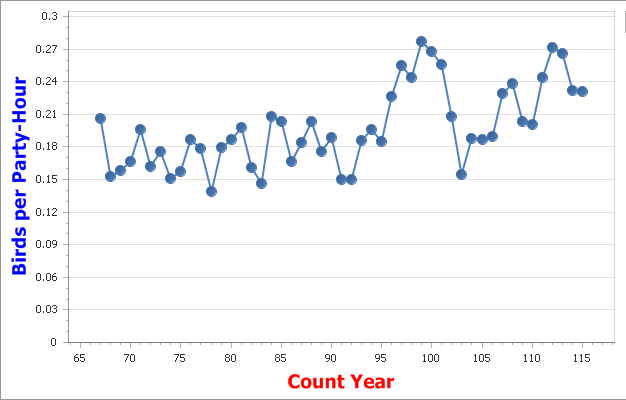 In 2006 the North American Waterbird Conservation Plan designated the Pied-billed Grebe a species of High Conservation Concern (2006). The rating was based largely on a significant decline in population numbers documented in the eastern United States in the late 1990s. In addition, threats to its wetland habitat on both the breeding and wintering grounds were considered relatively high. Recently, Partners in Flight (2017) has assigned it a low Continental Concern Score of 8/20. In Minnesota, the Pied-billed Grebe is neither state listed or designated a Species of Greatest Conservation Concern.

Despite what may be a declining population in Minnesota, the Pied-billed Grebe remains a well-distributed species in regions of the state that provide suitable habitat. There has been little focus on specific management needs, but like all wetland species, it will benefit from focused conservation initiatives designed to improve both the quantity and quality of wetland habitats. This includes aggressive conservation efforts by the implementation team of the Minnesota Prairie Landscape Conservation Plan (Minnesota Prairie Plan Working Group 2011) and the Minnesota Duck Recovery Program (Minnesota Department of Natural Resources 2006). Such efforts are particularly important in light of the predicted impacts of warming temperatures on wetlands throughout the northern Great Plains. Although the North American Bird Conservation Initiative (2010) has ranked the species as having a low vulnerability to climate change, increased precipitation and more intense storm events will decrease the likelihood that water levels will be stable during the critical breeding season.

Surprisingly, the Pied-billed Grebe is a not an infrequent victim of mortality from colliding with communication towers. The annual mortality at towers was estimated to be 5.6% of the North American population, third only behind the Yellow Rail and Swainson’s Warbler (Longcore et al. 2013).