A regular breeding resident and migrant in Minnesota. The Pine Warbler was an uncommon species during the Minnesota Breeding Bird Atlas (MNBBA).

Cup-nest in outer branches of the canopy in pine trees. 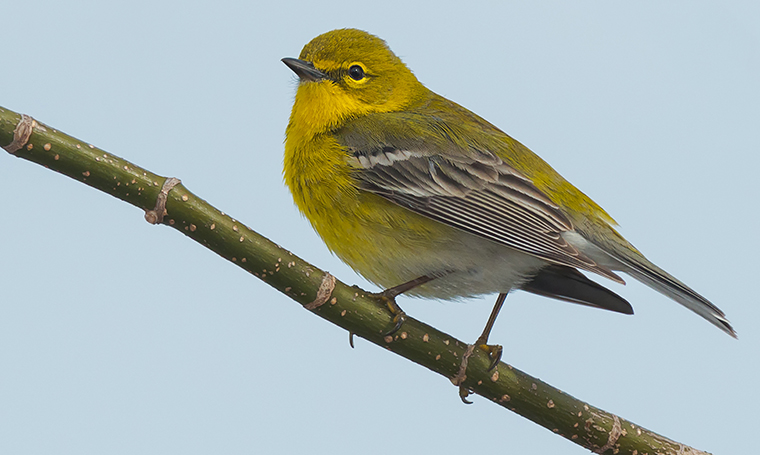 Breeding distribution and relative abundance of the Pine Warbler in North America based on the federal Breeding Bird Survey from 2011 to 2015 (Sauer et al. 2017).

Historically, the Pine Warbler has been distributed in northern coniferous forests as far south as northern Isanti County and west to Itasca State Park (Roberts 1932). Roberts reported nesting activity in Cass (nest with half-grown young), Isanti (2 pairs building), and St. Louis Counties (carrying food), and in Itasca State Park (nest and 3 young ready to leave the nest) and Leech Lake (nest). He noted it was one of the most common warblers throughout the coniferous region of northern Minnesota. He specifically mentioned Crow Wing County, in the vicinity of Walker in Cass County, Leech Lake, Vermilion Lake (St. Louis County), and Itasca State Park as locations where the species was commonly observed.

Since the early 20th century, Pine Warblers have been described as nesting primarily in the northeastern and north-central regions of the state, especially in Pine County from Mille Lacs Lake to Red Lake (Green and Janssen 1975). Green and Janssen reported confirmed nesting in Beltrami, Cass, and Clearwater Counties and inferred nesting in Hubbard, Lake, Lake of the Woods, Pine, and St. Louis Counties. Janssen (1987) suggested a more restricted range in northeastern Minnesota, describing the species as “sparsely represented or absent” in Cook, Lake, and St. Louis Counties. He included confirmed nesting in Clearwater, Crow Wing, and Pine Counties since 1970. In addition, he extended the breeding range southward to the Twin Cities metropolitan area, in Ramsey and Washington Counties, and to the central region of the state, in Morrison and Todd Counties. Several years later, however, Hertzel and Janssen (1998) excluded nesting in Clearwater County and added St. Louis County to the list of confirmed nesting counties in the state since 1970.

The MNBBA found breeding records of the Pine Warbler throughout the Laurentian Mixed Forest Province and several records in the central portion of the Eastern Broadleaf Forest Province (Figure 2). The most southerly evidence of possible breeding was from Washington County, west to Stearns and Otter Tail Counties. Confirmed nesting records in Becker, Carlton, Itasca, Lake of the Woods, and Wadena Counties were additions to the list of counties where nesting had been confirmed since 1970 by Hertzel and Janssen (1998). Probable nesting was also noted for Aitkin, Cook, Koochiching, Roseau, and Sherburne Counties.

Pine Warbler records represented 12.5% (591/4,737) of all blocks surveyed and 14.6% (341/2,337) of priority blocks (Figure 3; Table 1). Nesting was confirmed for only 22 blocks, a powerful indication of the difficulty of finding nests or observations of nesting behavior high in the canopy of pine trees.

The MNBBA’s predicted probability map for the Pine Warbler indicated a patchy pattern throughout north-central and northeastern Minnesota (Figure 4). The highest probabilities predicted were in the major pineries of the state, especially in the north-central region, such as in the Chippewa National Forest. Densities were predicted to be much lower in the more deciduous forested regions, such as southern Aitkin and St. Louis Counties, Carlton and Pine Counties, and along the North Shore of Lake Superior. The predicted pattern is quite similar to the general pattern shown in Figure 1 from the federal Breeding Bird Survey (BBS) (Sauer et al. 2017).

Rodewald et al. (2013), in their review of the Pine Warbler in North America, commented on the many local extirpations and range expansions in North America where pines have been lost or have been introduced. Schulte et al. (2005) found similar contemporary distributions of the Pine Warbler in Wisconsin when compared with pre-1850 distributions based on landscape modeling. They point out that pine plantations established in the southern part of the state have provided new habitats in that region of Wisconsin.

Chartier et al. (2013) noted a “dramatic expansion in its Michigan range in 20 years” and documented that the number of observed pairs of birds had increased from 817 to 2,876 between its first atlas in the early 1980s to its second atlas in 2002–2007. This change was largely due to the maturation of pine plantations that have been planted in many of Michigan’s national and state forest areas.

The situation in Minnesota is less clear because the acreage of mature pine forests in the state has declined (Generic Environmental Impact Statement 1992). Presumably the population and the range of the Pine Warbler contracted after the major logging eras of the late 19th and early 20th centuries. This assumption agrees with Roberts’s (1932) conclusion that the species was primarily distributed in the evergreen forests from northern Isanti to Itasca State Park. The MNBBA has illustrated a potential expansion of the population of the Pine Warbler in the state in recent years with both western and southward breeding observations. This distribution may reflect a similar pattern to that observed in Michigan. 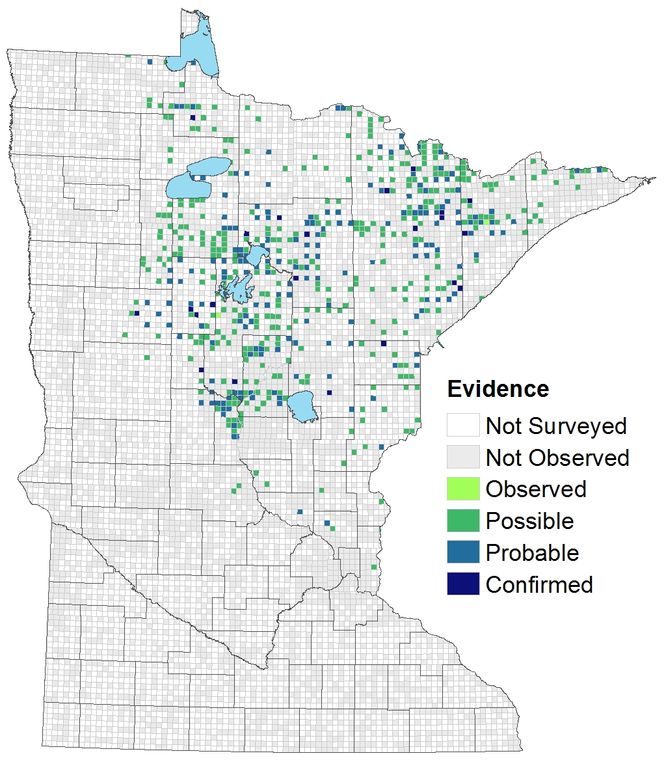 Breeding distribution of the Pine Warbler in Minnesota based on the Breeding Bird Atlas (2009 – 2013).

Summary statistics of observations by breeding status category for the Pine Warbler in Minnesota based on all blocks (each 5 km x 5 km) surveyed during the Breeding Bird Atlas (2009-2013).

Summary statistics for the Pine Warbler observations by breeding status category for all blocks and priority blocks (each 5 km x 5 km) surveyed during the Minnesota Breeding Bird Atlas (2009-2013). 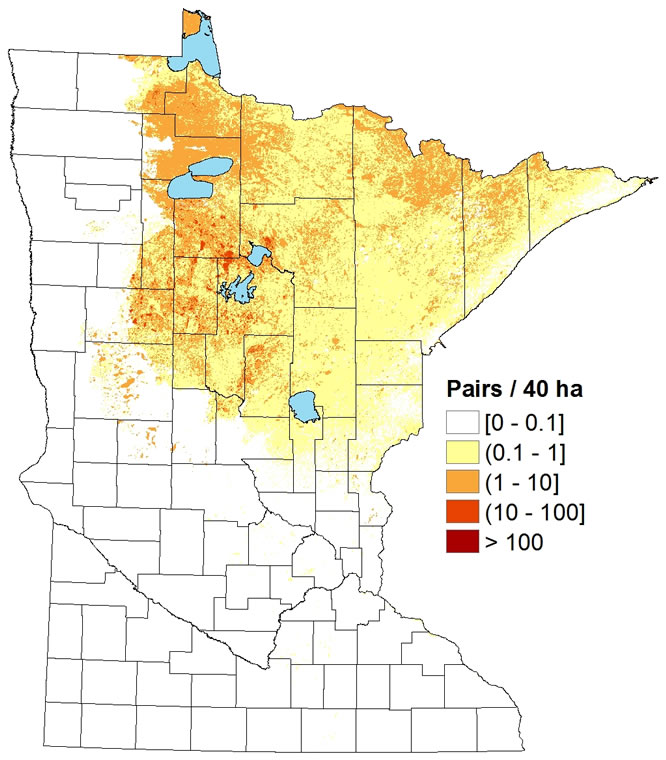 Predicted breeding distribution (pairs per 40 hectares) of the Pine Warbler in Minnesota based on habitat, landscape context, and climate data gathered during the Minnesota Breeding Bird Atlas (2009-2013) using the General Linear Modeling method with an adjustment for detectability.

Pine Warblers are very strongly associated with large pine trees. Rodewald et al. (2013) stated that this species is known to have nested in 15 different species of pine across its breeding range. Roberts (1932) emphasized that it “spends its entire existence, with the exception of the time consumed in migration, among pine trees.” He frequently mentions jack pine as a favorite tree of the species. In contrast, Janssen (1987) stated that “it is more frequently found in large stands of White Pine.” Schroeder (1985) summarized breeding habitat as pure, dense, mature pine stands that lack a tall deciduous understory, and did not mention white pine.

In Minnesota, Collins et al. (1982) emphasized large conifers with a high percentage of canopy cover and a low percentage of shrub cover. The National Forest Bird (NFB) monitoring program, which randomly sampled forest cover types in the Chippewa and Superior National Forests, clearly showed a strong attraction to mature pine forests (Figure 5) (Niemi et al. 2016). Their species indicator analyses of 1,950 observations showed significant use of red pine and white pine forest cover types with a lower preference for jack pine forests. It is common to have mixed pine stands, especially of red and white pine, that are not plantations. The extensive observations of Pine Warblers in white pine were also noted by the Wisconsin Breeding Bird Atlas participants (Cutright et al. 2006). 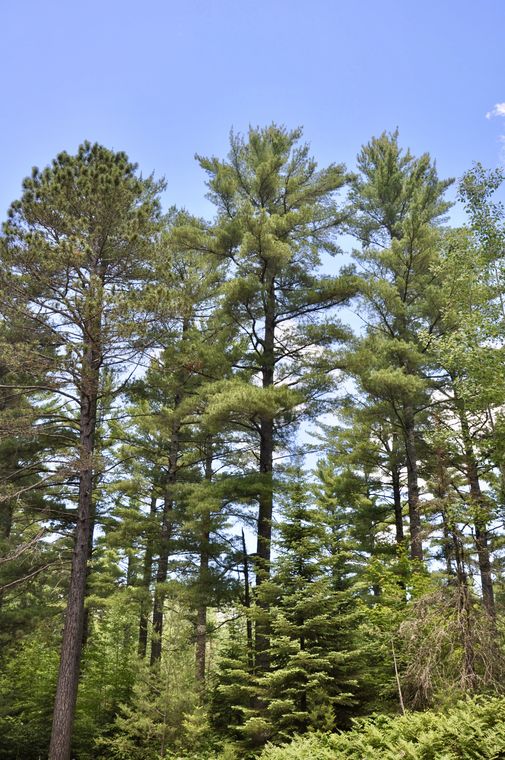 Habitat profile for the Pine Warbler based on habitats within 200 m of point counts where the species was present during the Minnesota Breeding Bird Atlas (2009-2013).

The total United States and Canadian population of the Pine Warbler was estimated at 13 million breeding adults by Partners in Flight (Rosenberg et al. 2016). The MNBBA estimated a Minnesota breeding population of about 840,000 breeding adults (95% confidence interval of 446,000 – 1,600,000), or about 6% of the North American population. Substantial caution in interpretation of these values is encouraged because of the different methods applied and the inherent annual variability in bird populations.

Trend estimates from the Breeding Bird Survey (BBS) were unreliable for Minnesota, as well as for Michigan, Ontario, Wisconsin, and the Boreal Hardwood Transition region. The U.S. trend based on 1,233 routes from 1966 to 2015 showed a significantly increasing population of 0.83% per year (Figure 7). Partners in Flight (Rosenberg et al. 2016) suggested an overall 68% increase in the population of this species from 1970 to 2014. These trends were similar to the significantly increasing trends observed in both the Chippewa (2.14% per year) and Superior (5.15% per year) National Forests from 1995 to 2016 (Figure 8). The combined regional increase for both national forests was estimated as 2.62% per year based on annual samples in 71 forest stands from 1995 to 2016. Collectively, these trend data suggest an increasing population of Pine Warblers and potential recent range expansions of the species in Minnesota.

Overall the mean population densities in the Chippewa National Forest were estimated at 3.0 pairs per 40 ha and were almost a magnitude higher than in the Superior National Forest, with a mean of 0.5 pairs per 40 ha (Niemi et al. 2016). These estimates reflect the greater density of pine forests in north-central Minnesota (Figure 4). 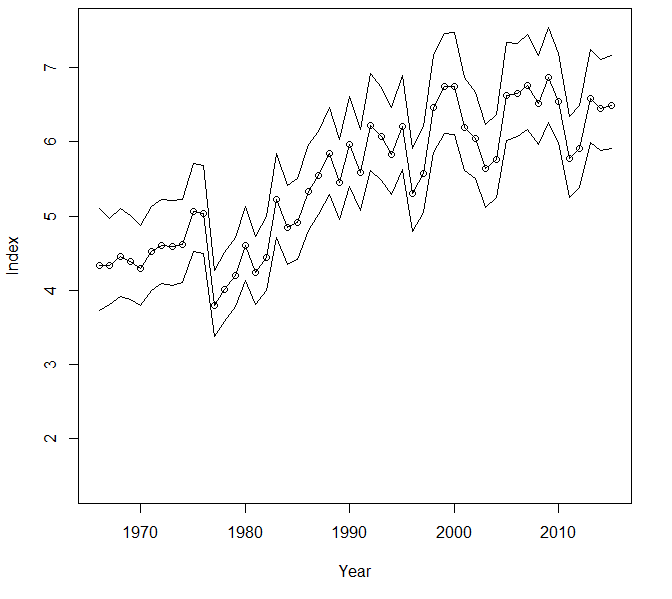 Breeding population trend for the Pine Warbler in the United States for 1966–2015 based on the federal Breeding Bird Survey (Sauer et al. 2017). 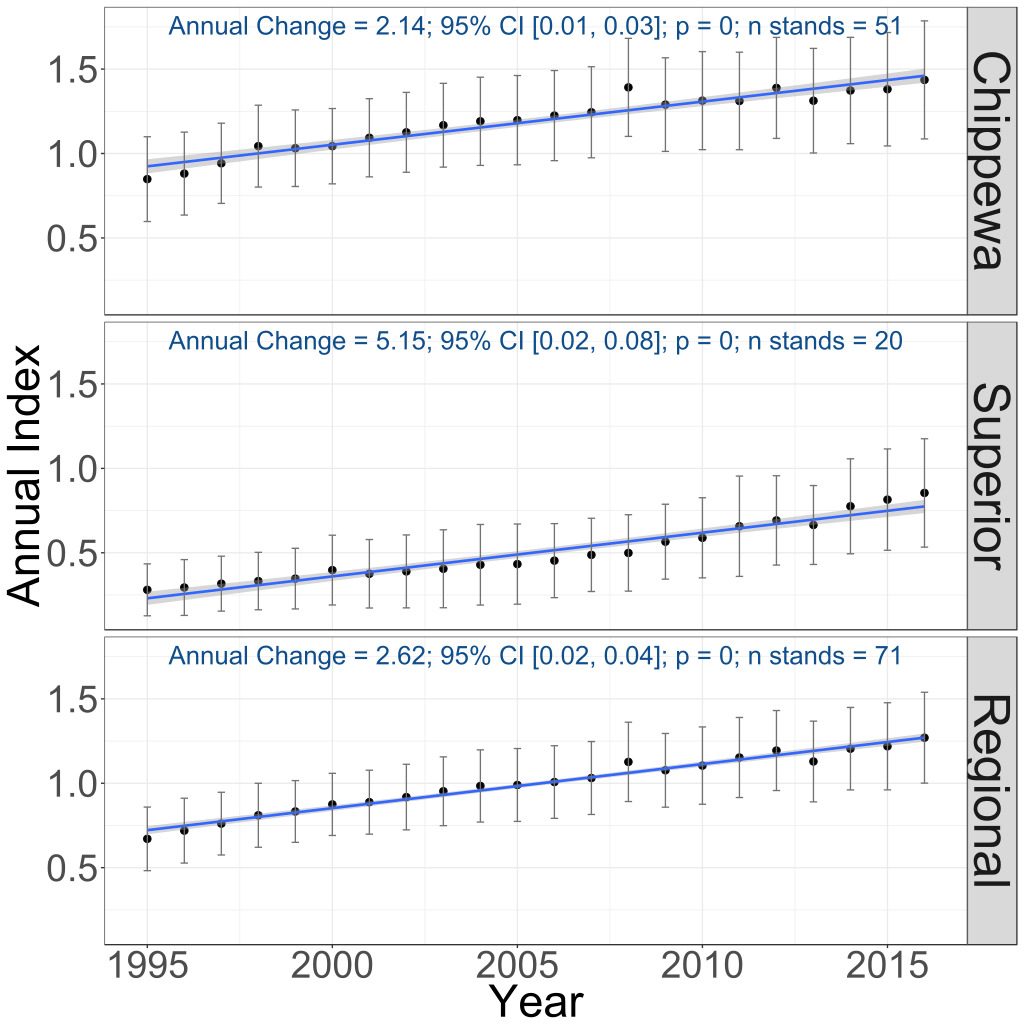 Breeding population trends of the Pine Warbler in the Chippewa and Superior National Forests and the combined regional trend, 1995–2016 (Bednar et al. 2016).

The Pine Warbler has a low Continental Concern Score of 7/20 based on Partners in Flight estimates (Rosenberg et al. 2016). The species’ breeding populations appear to be substantial, and their current population trends are increasing. Pine Warblers are sensitive to loss of pine forest habitat throughout their range. The species has been reported as sensitive to forest fragmentation (Robbins et al. 1989) and makes minimal use of young pine plantations (Schroeder 1985). Atwell et al. (2008) found the species insensitive to selective logging in red pine forests in north-central Minnesota if the canopy was left intact. The species does not appear to be sensitive to tower kills. Rodewald et al. (2013) suggested that their migration in one flight from breeding grounds to overwintering areas helps them avoid or minimize such collisions.

Langham et al. (2015) and the National Audubon Society (2015), in their review of North American bird species’ vulnerability to climate change, labeled the Pine Warbler as “climate endangered.” Their analysis suggests a potential loss of breeding habitat to the north with the changing climate, especially for the eastern short-distance migratory populations. Their model projections indicate that only 28% of the Pine Warbler’s current summer range will be stable over the period from 2000 to 2080.

Besides climate change, there appear to be few conservation concerns at present. Whether the species is now recovering from extensive loss of pine forests since the late 19th century and well into the 20th is not completely clear. However, several lines of evidence suggest the current maturation of pine trees and pine plantations may now be providing better breeding habitat conditions and facilitating an expansion or re-expansion into former ranges. From a management perspective, Pine Warblers can serve as a strong indicator of the health of mature pine forests by virtue of their almost exclusive use of this forest cover type (Niemi et al. 1997).