A permanent resident that is most abundant in northeastern and north-central Minnesota; considered a partial migrant. Northern populations appear to move south each year, while southern populations demonstrate irruptive movements that may be a response to winter food shortages. The Red-breasted Nuthatch was a common species during the Minnesota Breeding Bird Atlas (MNBBA).

Broadly distributed from southern Alaska east across much of Canada and south into the montane forests of the western United States, and east through the Great Lakes states, New England, and the Appalachian Mountains. It reaches its highest densities in Idaho, Washington, Oregon, California, and the Black Hills of South Dakota (Figure 1).

Permanent resident and partial migrant. During irruptions birds have been reported as far south as the Gulf coast of the United States. Reports of breeding far south of the species’ primary range are not uncommon in summers following large winter movements.

An omnivore that feeds primarily on insects and spiders during the summer and on a variety of seeds, including those from coniferous trees, in other seasons. Feeds along the small branches of the tree canopy and occasionally on the main trunk. 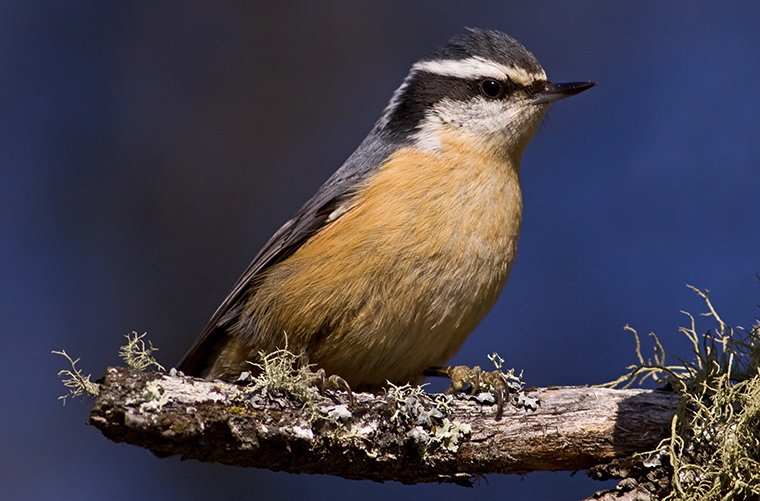 Breeding distribution and relative abundance of the Red-breasted Nuthatch in North America based on the federal Breeding Bird Survey from 2011 to 2015 (Sauer et al. 2017).

In the early 20th century, Roberts (1932) considered the Red-breasted Nuthatch to be a common summer resident, “breeding from northern Isanti County on the south to the eastern border of the Red River Valley on the west.” At the time, there were only two inferred nesting records: Aitkin County (“just preparing to rebuild in a former nesting hole”), and Cass County (adults “feeding fledglings as large as themselves”). Although birds remained throughout the winter months, their numbers were considerably fewer.

Nearly 40 years later, Green and Janssen (1975) assigned three status classifications to the species: permanent resident, migrant, and winter visitant. A permanent, year-round resident in northeastern and north-central Minnesota, the nuthatch also occasionally bred as far south as the Twin Cities metropolitan region. Green and Janssen (1975) identified 7 counties where nesting was inferred and 2 widely separated counties where nesting had been confirmed: Cook and Ramsey. Numbers, they noted, fluctuated widely from year to year, especially in the winter months. Regardless of the season, the nuthatch was always most abundant in the northeastern and north-central regions.

Janssen (1987) included a distribution map that delineated the species’ breeding range as extending south to the Twin Cities metropolitan region, northwest to eastern Stearns County, and farther north to Clearwater and eastern Roseau Counties. He identified 13 counties within this breeding range where nesting had been confirmed since 1970. Hertzel and Janssen (1998) later issued a revised map that identified only 12 counties where nesting had been confirmed since 1970; they deleted Washington County from Janssen’s (1987) earlier map.

Field work conducted by the Minnesota Biological Survey beginning in the late 1980s identified 808 breeding season locations for the Red-breasted Nuthatch. The species was found primarily in the Laurentian Mixed Forest Province. In addition, there were scattered records on the outskirts of the Twin Cities, and two locations were identified in far southeastern Minnesota, in northern Winona County and northern Houston County. There also were records as far west as northeastern Douglas County, northeastern Otter Tail County, eastern Becker County, eastern Mahnomen County, and eastern Polk County (Minnesota Department of Natural Resources 2016).

This broadened range expansion was observed also during the MNBBA. Red-breasted Nuthatches were reported in 27.0% (1,281/4,750) of the surveyed atlas blocks and in 31.3% (731/2,338) of the priority blocks; a total of 2,816 records were reported. Breeding was confirmed in 115 blocks (Figures 2 and 3; Table 1). The birds were reported in 49 counties (one block straddled three counties, Dakota, Hennepin, and Ramsey) and were confirmed breeding in 19 counties (including the 3 counties straddled by one block). Ten of the counties were additions to Hertzel and Janssen’s 1998 list: Becker, Carlton, Cass, Itasca, Koochiching, Morrison, Polk, Rice, Sherburne, and Washington. The most southerly nesting record was from Rice County; the most western record was from western Polk County, where one fledgling was seen begging for food with an adult carrying food on a nearby branch. The birds remained most abundant in the Laurentian Mixed Forest Province and were scattered through the southern region of the Eastern Broadleaf Forest Province. Two confirmed breeding records in the Twin Cities metropolitan area included 1 report of three young in a natural nest with another fledgling nearby (the block in southeastern Hennepin County that also straddled Ramsey and Dakota Counties), and 1 report of a female with a brood patch caught in a mist net (southern Washington County). The confirmed nest record in Rice County was also a banded female with a well-developed brood patch. Nesting was considered probable in southern Rice County as well as in Olmsted and Fillmore Counties. In southern Minnesota, birds were found in suitable habitat as far west as Nicollet and Blue Earth Counties.

Clearly this species is finding sufficient mature trees, including conifers, in areas beyond what Roberts (1932) considered its primary breeding habitat more than 100 years ago. Although the species occurs in forest stands south and west of the Laurentian Mixed Forest Province, it nevertheless remains most abundant in the conifer forests and mixed coniferous-deciduous forests of northern Minnesota. There it gradually replaces the White-breasted Nuthatch in abundance as one moves north, especially in the Arrowhead region of northeastern Minnesota.

The predicted breeding distribution map generated with MNBBA data (Figure 4) predicts that the core of the species’ breeding distribution is in the Laurentian Mixed Forest Province, but augments that with a moderate probability of finding lower breeding densities throughout much of the northern half of the Eastern Broadleaf Forest Province. Patches of high abundance are predicted as far west as the Hardwood Hills Subsection in Otter Tail and Douglas Counties, farther south in Pope and Kandiyohi Counties, and in other sites scattered throughout southern Minnesota.

The southward expansion of Red-breasted Nuthatches in Minnesota is representative of a broader expansion observed farther south and east in both the United States and Canada (Ghalambor and Martin 1999). The change has been largely attributed to an increase in coniferous forest cover. The Ontario Breeding Bird Atlas, for example, detected a notable expansion southward in the 20 years between their first atlas (1981–1985) and their second atlas (2001–2005). Noting that the species was absent from southern Ontario 100 years ago, Cadman et al. (2007) cited an increase in the number and age of conifer plantations as the primary factor responsible for the change. Wisconsin’s first atlas (1995–2000) also documented a southern range expansion, with approximately 50 confirmed and probable records reported from central and southeastern Wisconsin (Cutright et al. 2006). Breeding records have been reported from numerous states even farther south, including Iowa, Missouri, Kansas, and Illinois (Ghalambor and Martin 1999). 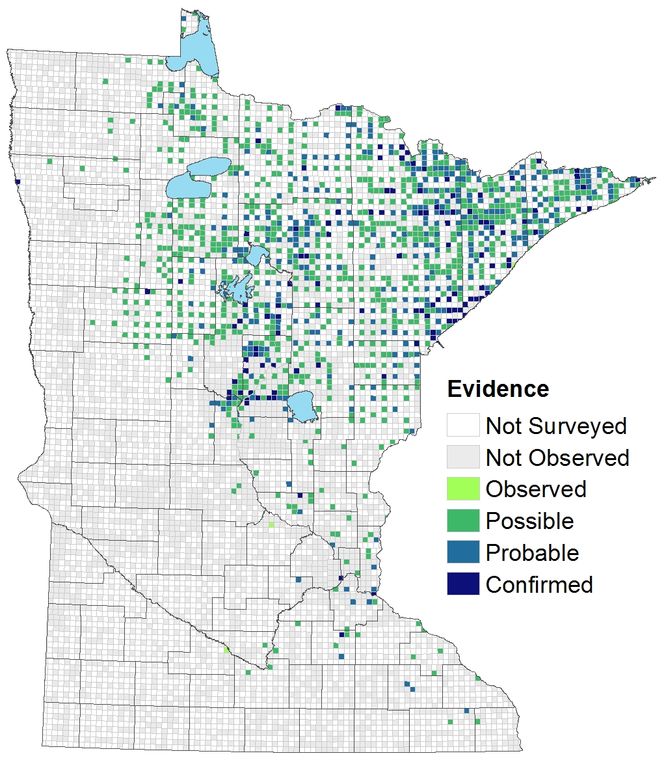 Breeding distribution of the Red-breasted Nuthatch in Minnesota based on the Breeding Bird Atlas (2009 – 2013).

Summary statistics of observations by breeding status category for the Red-breasted Nuthatch in Minnesota based on all blocks (each 5 km x 5 km) surveyed during the Breeding Bird Atlas (2009-2013).

Summary statistics for the Red-breasted Nuthatch observations by breeding status category for all blocks and priority blocks (each 5 km x 5 km) surveyed during the Minnesota Breeding Bird Atlas (2009-2013). 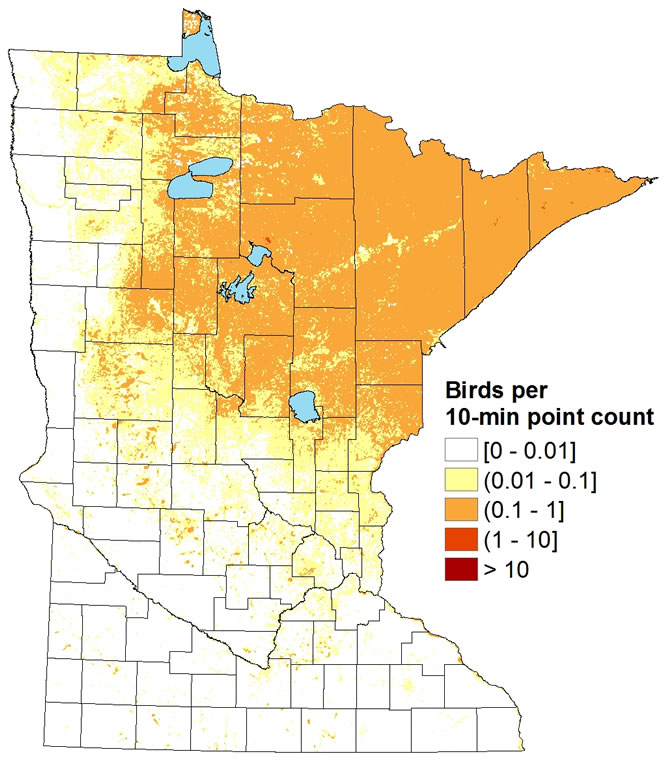 Predicted breeding distribution (birds detected per 10-minute point count) of the Red-breasted Nuthatch in Minnesota based on habitat, landscape context, and climate data gathered during the Minnesota Breeding Bird Atlas (2009-2013) using the General Linear Modeling method without an adjustment for detectability.

An inhabitant of both upland and lowland coniferous forests, the Red-breasted Nuthatch can be found in a variety of deciduous woodlands where conifers are present (Danz et al. 2007; Green 1995). Trees that provide suitable opportunities (e.g., snags, dead and decaying branches) for cavity excavation are critical, as are abundant conifer cones for feeding (Ghalambor and Martin 1999; Figure 5).

In a long-term study of forest songbirds conducted in the four national forests of northern Minnesota and Wisconsin, Niemi et al. (2016) found the birds showed the strongest preference for mature upland pine stands but also demonstrated a wide tolerance for other forest cover types where scattered mature conifers were likely present, even as snags left from previous forest management activities.

Data collected within 200 m of MNBBA point count locations where Red-breasted Nuthatches were reported demonstrated the species’ strong preference for conifer stands and boreal forest cover types as well as their tolerance for a variety of other cover types, including bogs, northern mixed forests and lowland coniferous stands (Figure 6). 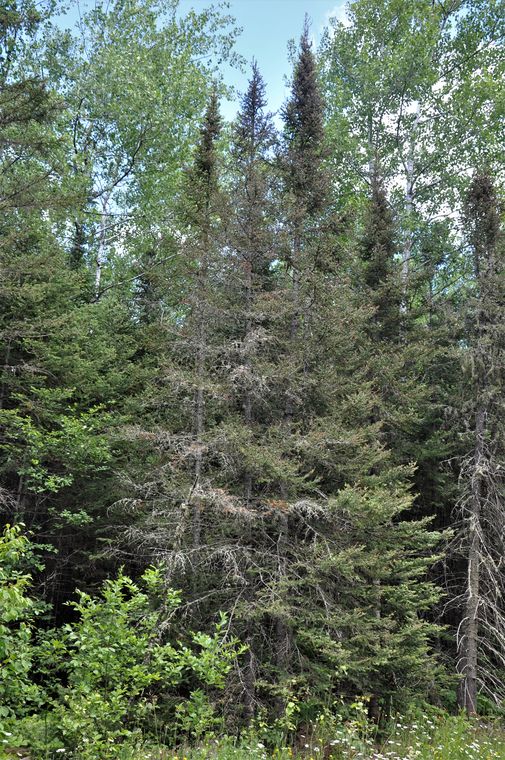 Habitat profile for the Red-breasted Nuthatch based on habitats within 200 m of point counts where the species was present during the Minnesota Breeding Bird Atlas (2009-2013).

Data from the federal Breeding Bird Survey (BBS) have been used by biologists to estimate the size of the North American population of Red-breasted Nuthatches at 19 million breeding adults (Rosenberg et al. 2016). Minnesota was estimated to support approximately 1% of the continental population (Partners in Flight Science Committee 2013), which places the current statewide estimate at 190,000 birds.

Although they are a common bird in northern Minnesota, significantly higher breeding densities are observed in the Pacific Northwest (Figure 1). In Minnesota, an average of 1 to 2 Red-breasted Nuthatches are detected per BBS route in the state each year (the high abundance in northern Minnesota is reduced by their absence throughout much of the agricultural region). Across British Columbia, Washington, and Oregon, however, an average of 7 to 9 birds were detected on each route. Local breeding densities in this same region range from 6 breeding pairs per 40 ha to 28 pairs per 40 ha (Ghalambor and Martin 1999).

Since the BBS began in 1966, Red-breasted Nuthatch populations have demonstrated a slow but significant annual increase of 0.72% per year across their breeding range (Sauer et al. 2017). Populations have expanded at a much faster rate in Minnesota, averaging 3.58% per year since 1967 (Figure 7); the rate of increase slowed to 1.39% per year from 2005 to 2015. Wide fluctuations in statewide numbers are also apparent.

Increasing populations have also been documented on the Superior and Chippewa National Forests. From 1995 through 2016, the species increased an average of 4.92% per year on the Chippewa and 3.08% on the Superior (Figure 8). Niemi and his colleagues noted that the general decrease in the level of timber harvest activities on both national forests is likely benefiting many species that, like the nuthatch, prefer more mature forests (Niemi et al. 2016). 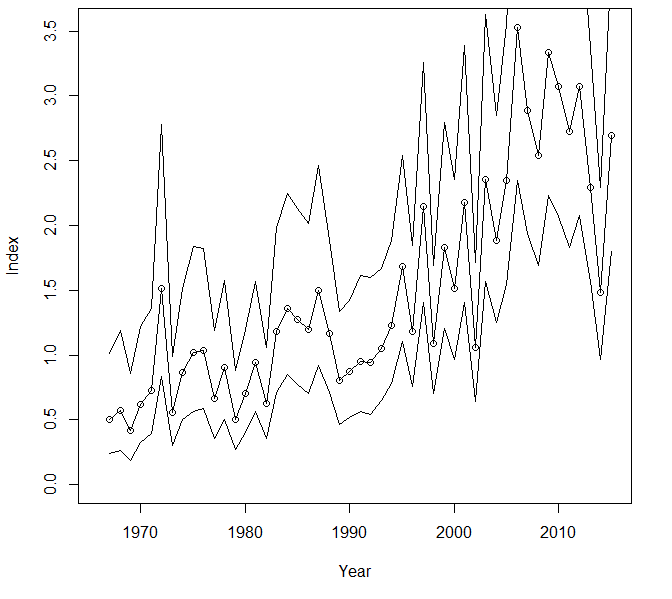 Breeding population trend for the Red-breasted Nuthatch in Minnesota for 1967–2015 based on the federal Breeding Bird Survey (Sauer et al. 2017). 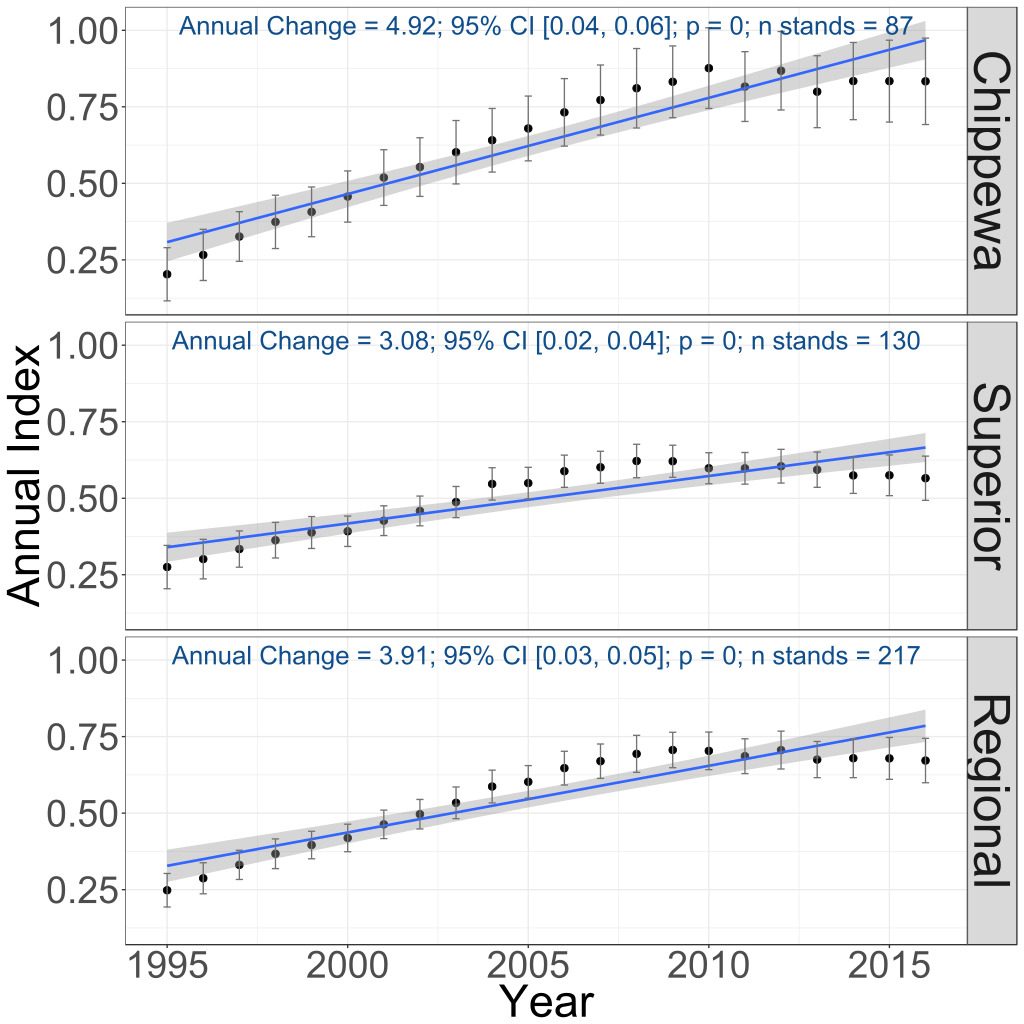 Breeding population trends of the Red-breasted Nuthatch in the Chippewa and Superior National Forests and the combined regional trend, 1995–2016 (Bednar et al. 2016).

Given long-term increasing populations and current range expansion, the Red-breasted Nuthatch has been assigned a relatively low Continental Concern Score of 6/20 by Partners in Flight (Rosenberg et al. 2016).

The principal factors affecting the long-term sustainability of the species pertain to timber management activities in the boreal forest and the long-term impacts of warming temperatures on a species that is dependent on forests that dominate cooler regions. As long as timber management activities provide for diverse species composition and maintain mature snags, local management should adequately provide for the species. The 2010 “State of the Birds” report predicted the nuthatch’s vulnerability to climate change as low (North American Bird Conservation Initiative 2010). A recent, more in-depth analysis by the National Audubon Society (2016), however, classified the species as “climate threatened” and predicted a long-term shift of its’ range northward. By the year 2080 it could lose 23% of its current summer range (Langham et al. 2015; National Audubon Society 2016).  In time, the White-breasted Nuthatch may replace its petite and more colorfully adorned relative, the Red-breasted Nuthatch, in Minnesota’s northern forests.