A regular breeding resident, migrant, and winter vagrant; the Sedge Wren was common during the Minnesota Breeding Bird Atlas (MNBBA).

The Sedge Wren is found in the central United States and Canada from the western Great Lakes region in Michigan west to Montana and central Alberta. Its highest densities occur in central Minnesota and central North Dakota (Figure 1).

Assigned a Continental Concern Score of 7/20 by Partners in Flight; identified as a Species in Greatest Conservation Need by the Minnesota Department of Natural Resources and a Stewardship Species by Audubon Minnesota.

Short-distance migrant that winters in the southeastern United States along the Atlantic Coast to Texas.

Gleans insects, spiders, and other arthropods from vegetation.

Globular nest of sedges and grasses; several are made by the male in a territory. 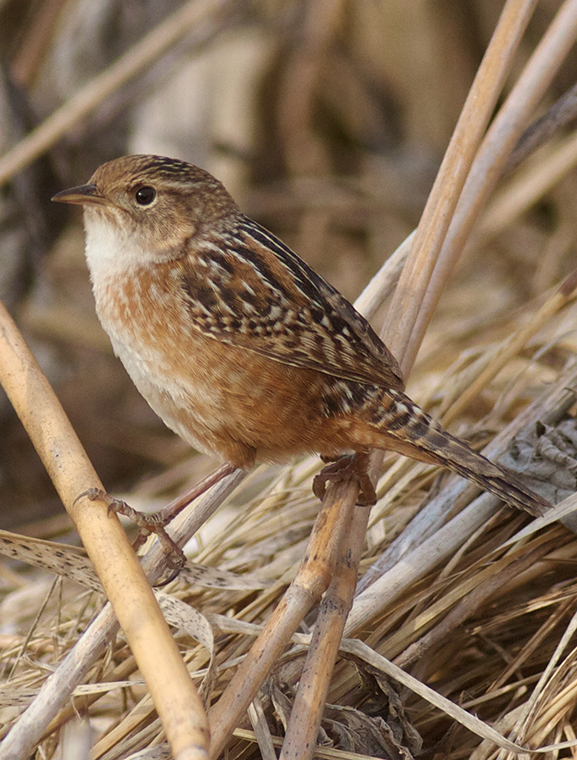 Breeding distribution and relative abundance of the Sedge Wren in North America based on the federal Breeding Bird Survey, 2011–2015 (Sauer et al. 2017).

A secretive but vocal species, Roberts (1932) stated the Sedge Wren was found throughout the state but “most numerous” on the prairies, such as along the Red River valley in northwestern Minnesota. He recorded limited confirmed nesting but did cite confirmed nesting in Cass, Jackson, and Marshall Counties and in Minneapolis; all were nests with eggs. He also reported nests with no eggs in Aitkin and Lake of the Woods Counties.

Green and Janssen (1975) also emphasized the wren’s distribution throughout the state, though they noted it was less numerous in the northeastern forested region. They also concurred that its primary distribution was in the western portion of the state, where “grassy meadows and wet grassy uplands” are abundant. Janssen’s (1987) description was similar, though he added “western and central” to the regions of the state where it was most numerous. He listed confirmed nesting from 5 counties since 1970, including Clearwater, Hennepin, Le Sueur, Wadena, and Washington Counties. Janssen also noted one unusual winter record from Mower County on January 25, 1981 (Kneeskern and Kneeskern 1981). Hertzel and Janssen (1998) would later add Brown, Cass, Kandiyohi, Marshall, Red Lake, and Stevens Counties to the list of confirmed nesting since 1970, but excluded Clearwater and Hubbard Counties.

The Minnesota Biological Survey (MBS) included 1,893 breeding season locations and reinforced the Sedge Wren’s wide breeding distribution in Minnesota (Minnesota Department of Natural Resources 2017). The MBS included locations from nearly every county in the state. Counties not included were primarily from southern Minnesota, including Houston, Renville, and Sibley.

The MNBBA participants reported a total of 3,555 records of the Sedge Wren. The distribution of records was statewide but sparse in the extreme northeastern forested area, the extreme southeastern region, and along the Red River valley (Figure 2). The MNBBA records included 42.6% (2,037/4,777) of the surveyed blocks and 56 confirmed nesting records (Figure 3; Table 1). Participants reported new county nesting records from 27 counties, which included 2 records that straddled 2 counties (Big Stone/Lac qui Parle and Rice/Dakota). None of the 4 counties had previous confirmed nesting but were only counted as 2 additional counties. Nesting was also confirmed in Aitkin County, the first record since Roberts reported an empty nest in 1893.

Probable nesting was also recorded from every county in the state except Martin County in Minnesota’s southern tier of counties. One probable nesting location was identified in Winona County, where the MBS had recorded breeding observations in three locations.

The MNBBA probability distribution map emphasized potentially suitable habitat in northwestern Minnesota, the Tallgrass Aspen Parklands Province, and in central Minnesota (Figure 4). Additional areas that are predicted to have higher densities include the Red Lake peatlands north of Upper Red Lake and the eastern edge of the Red River Valley Section. Relatively low populations are predicted in the heavily forested regions in north-central, northeastern, and southeastern Minnesota, as well as in the Twin Cities metropolitan area.

As Roberts and later authors have emphasized, this species is widely distributed throughout the state, and most focused on noting the species’ presence primarily through its territorial songs. Less attention has been directed to confirmation of nesting activity. The Sedge Wren is a secretive species, and finding nests can be difficult because the birds make many decoy or dummy nests, plus sedge meadows can be difficult to traverse. Therefore, observations beyond song activity have been limited. McNair (1983) pointed out that finding nests may not always be an indicator of breeding activity because of the propensity for the species to make dummy nests. Because atlas rules state that confirmed nesting includes finding a nest, nest building, or carrying nesting material, the MNBBA data may overemphasize the species’ breeding activity in Minnesota. Regardless, the MNBBA has greatly expanded potential nesting in the state, and absolute evidence of “successful” nesting remains a challenging task and a subject of further research.

Atlas projects in Michigan (Brewer et al. 1991; Chartier et al. 2013), Ontario (Cadman et al. 2007), and Wisconsin (Cutright et al. 2006) all describe Sedge Wren breeding distributions that are widely scattered and largely determined by the patchiness of suitable habitat. In Ontario, it was largely found in the southern regions, but a relatively high proportion existed in western regions, especially around Lake of the Woods. Similarly, the species is widely distributed in eastern North and South Dakota as well as in southern and central Manitoba (Figure 1).

Herkert et al. (2001) suggested the species has expanded eastward and northward following European settlement as forests were cleared for farming and pastureland. They also emphasized that such gains in potential habitat have been lost in many of these same areas due to wetland drainage, more intensive agricultural practices, and reforestation in former grassland communities. These habitat changes have been mirrored in Minnesota, especially in the agricultural region of the state. The species’ absence along the Red River valley is especially notable. 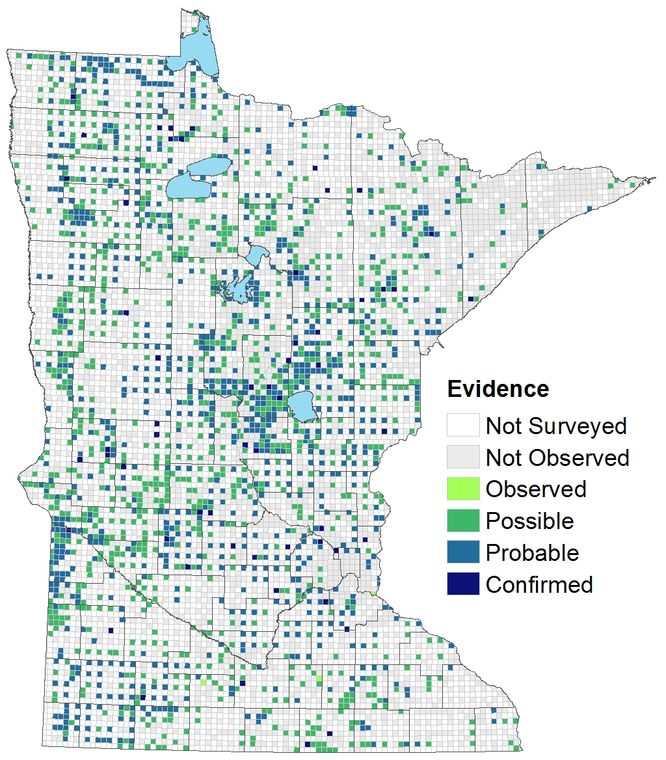 Breeding distribution of the Sedge Wren in Minnesota based on the Breeding Bird Atlas (2009 – 2013).

Summary statistics of observations by breeding status category for the Sedge Wren in Minnesota based on all blocks (each 5 km x 5 km) surveyed during the Breeding Bird Atlas (2009-2013).

Summary statistics for the Sedge Wren observations by breeding status category for all blocks and priority blocks (each 5 km x 5 km) surveyed during the Minnesota Breeding Bird Atlas (2009-2013). 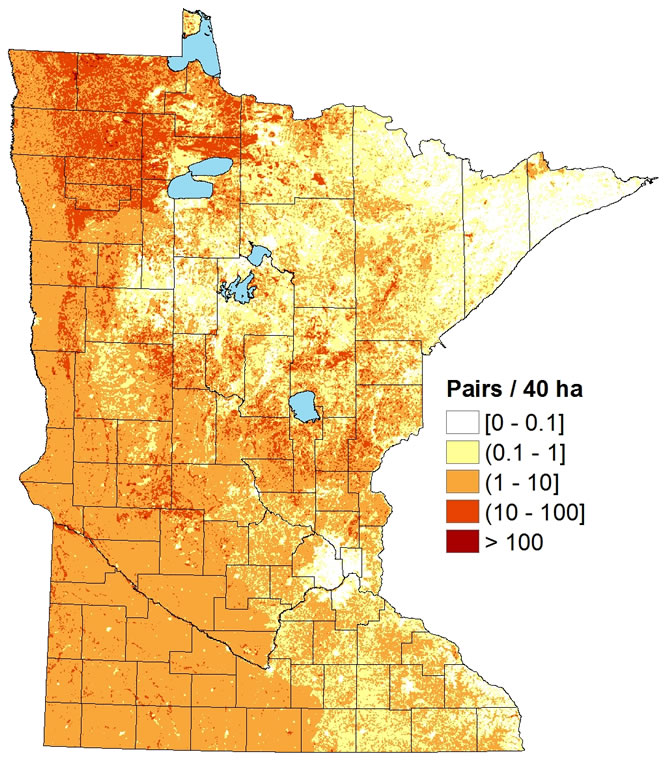 Predicted breeding distribution (pairs per 40 hectares) of the Sedge Wren in Minnesota based on habitat, landscape context, and climate data gathered during the Minnesota Breeding Bird Atlas (2009-2013) using the General Linear Modeling method with an adjustment for detectability.

In a study of 840 coastal wetlands throughout the Great Lakes, Panci et al. (2017) found that the presence of the Sedge Wren was best predicted by lower road density within 1000 m, higher proportions of herbaceous wetlands within 500 m, and sedge habitats within 100 m. 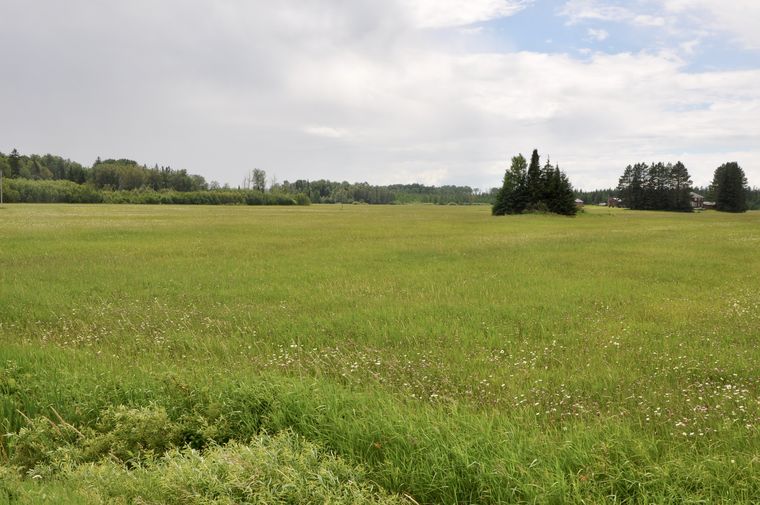 Habitat profile for the Sedge Wren based on habitats within 200 m of point counts where the species was present during the Minnesota Breeding Bird Atlas (2009-2013).

BBS trend estimates for Minnesota from 1967 to 2015 indicated a stable population. The data hint at an increase during this period, but counts are highly variable from year to year, and recent counts from 2013 to 2015 have been lower (Figure 7). The overall trends are consistent with most estimates across North America, but both North and South Dakota have significantly increasing populations over this same time period of 4.45% per year and 5.64% per year, respectively. Wisconsin had a significant decrease of 2.03% per year during the same time period. In general, the BBS trends from 1966 to 2015 indicated increasing populations in northwestern and west-central Minnesota and in other western portions of the species’ range from Nebraska to Saskatchewan (Figure 8). Populations are declining to the east and southeast of these regions, except for portions of the Upper Peninsula of Michigan and some areas of Ontario. Overall, Partners in Flight (Rosenberg et al. 2016) estimated an increase in its North American population of 72% from 1970 to 2014. 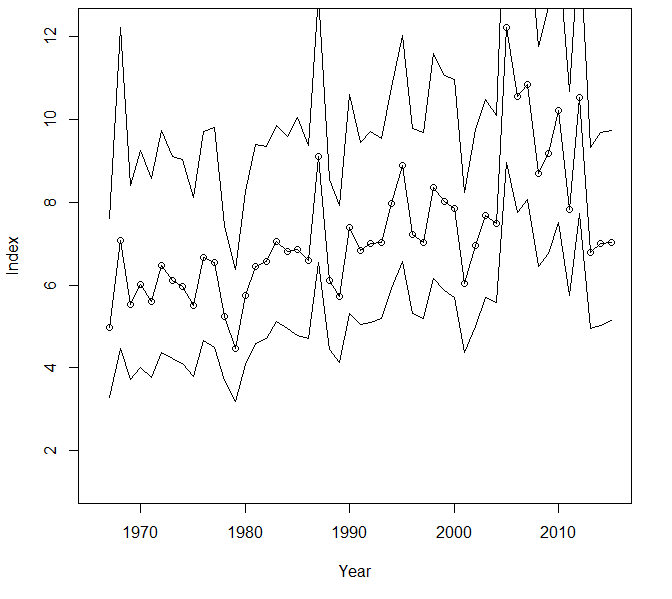 Breeding population trend for the Sedge Wren in Minnesota for 1967–2015 based on the federal Breeding Bird Survey (Sauer et al 2017).

Breeding population trend map for the Sedge Wren in the United States and Canada for 1966–2015 based on the federal Breeding Bird Survey (Sauer et al 2017).

Partners in Flight designated a relatively low conservation concern score for the Sedge Wren of 7/20 in the United States and Canada (Rosenberg et al. 2016). Minnesota, however, has a high proportion of the species’ North American breeding population, so a proportionately higher conservation responsibility potentially lies in Minnesota. The Sedge Wren has been designated a Species in Greatest Conservation Need by the Minnesota Department of Natural Resources (2015) and a Stewardship Species by Audubon Minnesota (Pfannmuller 2012); both designations reflect this high responsibility.

Degradation of habitat through draining of wetlands and conversion to agriculture and urbanization are among the major conservation concerns for this species. Wetland loss between 1950 and the mid-1970s was estimated at 1.9 million ha in the United States (Tiner 1984). The sedge and grass meadows that the species prefers is among the easiest to drain and most susceptible to wetland conversion.

Protection of these habitats, especially large complexes, are likely the best solution for conservation. Many programs, such as the Conservation Reserve Program and the North American Waterfowl Management Plan, that protect large sedge and grass meadows have already benefitted the species (Herkert et al. 2001).

Common factors that negatively affect nest success and population levels include nest loss due to early harvesting of hay as well as inclement weather, predation, and strong intraspecific interactions with nest destruction by other Sedge Wrens (Picman and Picman 1980; Herkert et al. 2001).

Langham et al. (2015) and the National Audubon Society (2015) identified the Sedge Wren as a “climate threatened” species. Climate models predict that only 29% of its current summer and winter habitat is stable, but suitable habitat may be available in the future, north of where it currently occurs. However, the species’ preferred wet, tall grass meadows are in constant threat from agriculture and other developments.