A regular breeding resident and migrant that is regular in winter. The Sharp-shinned Hawk was uncommon during the Minnesota Breeding Bird Atlas (MNBBA).

Widely but patchily distributed across the forested areas of North America, Mexico, Central America, and the Caribbean to the tree limit in Canada and Alaska. Sharp-shinned Hawks are not common anywhere within their wide breeding range (Figure 1).

A short- to medium-distance migrant. Most northern populations spend winters in the southern United States, the Caribbean, and into Mexico. Populations south of the United States are thought to be residents or less migratory. Some individuals linger in northern areas throughout the winter, especially where adequate prey bird populations are found, such as near feeders.

Predator that captures small birds, some small mammals, and large insects by surprise attacks on the wing or from a perch.

Placement is usually well hidden on the horizontal branches of a coniferous tree, close to the trunk and well below the canopy. 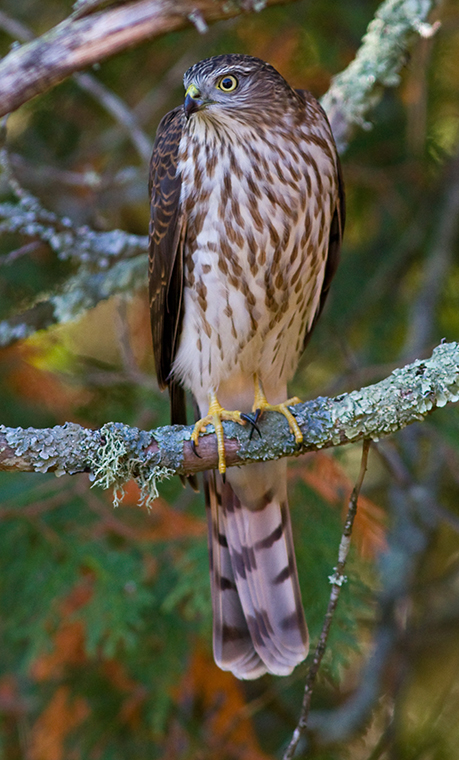 Breeding distribution and relative abundance of the Sharp-shinned Hawk in North America based on the federal Breeding Bird Survey, 2011–2015 (Sauer et al. 2017).

Besides fall migration, the Sharp-shinned Hawk is an elusive, seldom-seen species. Historically, Roberts (1932) simply described it as a “summer resident, breeding sparingly throughout the state.” He felt the species was formerly more abundant than in the early twentieth century, with declines possibly due to habitat loss and shooting. For example, Hatch (1892) and Roberts (1932) both cited F.L. Washburn, who said, “[It] was common all through the Red River Valley in August, 1885.” The loss of woodlands and other habitats since the 1800s have contributed to reductions in its distribution in that region as well as elsewhere.

Hatch (1892) said he had “secured a few nests” of the Sharp-shinned Hawk but did not indicate their locations. Roberts (1932) assumed they were in Hennepin County. Hatch reinforced the secretive nesting behavior of the Sharp-shinned Hawk by stating that at the start of the nesting season, “they retire to the unfrequented sections, notably the borders of forests and thickets, which no one less a ‘crank’ than an industrious ornithologist, would think of penetrating.” Roberts (1932, 1936) included two confirmed nests, each with six eggs, in Cass County (1919). He also reported an unusual 1921 nest by Surber with three full-fledged young in Murray County found “in an oak tree in the midst of a nesting-colony of Night Herons.”

More than 40 years later, Green and Janssen (1975) highlighted that no summer records existed since the 1930s from a line west of Fillmore, Rice, Stearns, Becker and Roseau Counties, roughly the least forested areas of Minnesota. They added that sharpies were found in north-central, northeastern, central, and southeastern regions but were “generally scarce everywhere.”

Johnson (1982) summarized nesting of the Sharp-shinned Hawk in Minnesota. He reported that nine nesting records existed for the state spanning the period from Roberts (1932) reports of the 1919 nesting in Cass County to his own observations of two nests in Hubbard County, one each in 1980 and 1981 and both with three young. He pointed out that the low number of nests found is only surprising to those who have never tried to look for a nest of a sharpie. Besides the earlier nesting described by Roberts (1932), Johnson added reports of a nest with six young in St. Louis County in 1945, one in Winona County in 1953, and two unpublished records of nests from Clearwater County. He also reported widespread summer observations from 1970 to 1981 throughout the forested areas of Minnesota from Fillmore to Marshall Counties and virtually all counties to the east.

Janssen (1987) outlined a similar distribution to that described by Green and Janssen (1975) but which excluded all of central, southern, and western Minnesota. His description included all areas south or west of a line from central Pine County to northeastern Todd County and northwest to western Roseau County. Janssen (1987) included confirmed nesting since 1970 in 5 counties: Beltrami, Clearwater, Cook, Hubbard, and Lake. Hertzel and Janssen (1998) later added Cass County to the list of confirmed nesting since 1970.

Another tribute to the secretive breeding behavior of the Sharp-shinned Hawk was provided by the Minnesota Biological Survey (MBS) (Minnesota Department of Natural Resources 2017). MBS has many sharp-eyed observers, but they have only recorded 20 breeding season locations. Their locations ranged from 3 in Morrison County of central Minnesota and northeastward to 2 in Cook County, including locations in Aitkin, Cass, Itasca, Lake, and St. Louis Counties.

The MNBBA participants included 156 records of the Sharp-shinned Hawk that were heavily distributed in northeastern, northern, and north-central Minnesota (Figure 2). Breeding evidence was obtained in 3.1% (145/4,735) of the blocks surveyed and in 3.6% (83/2,337) of the priority blocks (Figure 3 and Table 1). A total of 11 confirmed nesting records were recorded from 7/8 counties, including Becker, Crow Wing, Cook, Itasca, Pine, and St. Louis, and 1 block that straddled 2 counties: Cass and Todd. Most records were of possible nesting, which were places where Sharp-shinned Hawks were observed in suitable nesting habitat. The use of possible nesting for raptors was used with caution. Sharp-shinned Hawk records from the MNBBA were scrutinized for details to support the record, such as observer, habitat, location, and details of the observation. The level of scrutiny was higher for observations in western and southern Minnesota, where the Sharp-shinned Hawk has a higher probability of being confused with the Cooper’s Hawk.

In their review of the Sharp-shinned Hawk in North America, Bildstein and Meyer (2000) stated that the loss of eastern deciduous forests at the end of the nineteenth century and early twentieth century certainly affected the species’ distribution, particularly in eastern North America. These changes also occurred in Minnesota and were observed by Roberts (1932). Continued reductions in forested habitats and ongoing shooting of the species likely led to further declines in Minnesota through the 1900s and were further exacerbated by DDT and its effects in the mid-1900s. Therefore, the most recent history of the species suggests its population declined further between 1947 and 1971 during the heaviest use of DDT (Evans 1982). Little current evidence from the MNBBA indicates that the species has reestablished populations in the southern portions of Minnesota, but Bildstein and Meyer (2000) noted the species was expanding its breeding range southward.

Bounties on Sharp-shinned Hawks were largely abolished in the early twentieth century, but thousands were shot, for example, at Hawk Mountain in Pennsylvania during migration periods (Bildstein and Meyer 2000). The Sharp-shinned Hawk was also a primary shooting target at Hawk Ridge in Duluth due to its habit of flying “low” and in easy range of shotguns at this site. Activities by the Duluth Bird Club and a young ornithologist, Dr. Pershing Hofslund from the University of Minnesota–Duluth, led efforts to stop the shooting in the early 1950s. Because of its habit of preying on small birds, sharpies did not receive full protection until the Migratory Bird Treaty Act was amended in 1972. 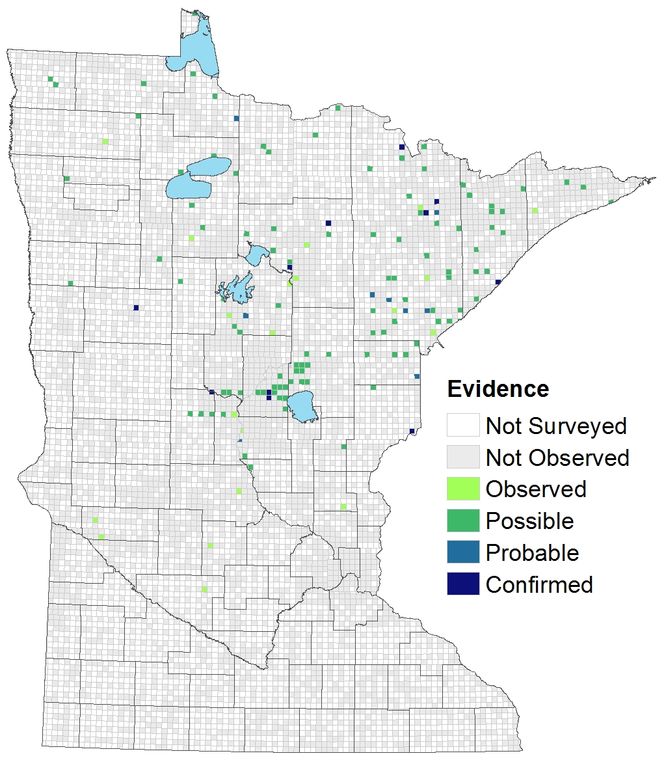 Breeding distribution of the Sharp-shinned Hawk in Minnesota based on the Breeding Bird Atlas (2009 – 2013).

Summary statistics of observations by breeding status category for the Sharp-shinned Hawk in Minnesota based on all blocks (each 5 km x 5 km) surveyed during the Breeding Bird Atlas (2009-2013).

Summary statistics for the Sharp-shinned Hawk observations by breeding status category for all blocks and priority blocks (each 5 km x 5 km) surveyed during the Minnesota Breeding Bird Atlas (2009-2013).

Niemi and Hanowski (1992) consistently found the species in dense black spruce forests of the Red Lake peatlands in northern Minnesota. Out of thousands of breeding bird point counts from 1995 to 2010 in four national forests in northern Minnesota and Wisconsin, only 16 observations of Sharp-shinned Hawk were recorded, compared with 348 of the Broad-winged Hawk (Niemi et al. 2016).

Rosenfield et al. (1991) noted that most population estimates are inaccurate because they are based on migration counts, which are highly variable. Migration counts, however, provide one of the few ways to examine changes in the species’ population.

Even though the Sharp-shinned Hawk is normally very secretive, during migration they can be quite conspicuous. At Hawk Ridge in Duluth sharpies are the second-most-abundant raptor counted (after the Broad-winged Hawk) and the most abundant raptor captured and banded. From 1972 to 2009, a total of 60,147 sharpies were banded at Hawk Ridge (Evans et al. 2012) and an average of over 13,000 per year were counted from the ridge.

The declines in the 1980s and 1990s were potentially attributed to pesticides, natural population cycles, declining populations of Neotropical migrant songbirds, migratory short-stopping, and cycles of spruce budworm infestations in boreal Canada (Farmer et al. 2008). Migratory short-stopping was implicated as a major cause due to the increased observations of the Sharp-shinned Hawk in Christmas Bird Counts in eastern Canada and the northeastern United States north of the watch sites (Viverette et al. 1996). (Short-stopping refers to the species not migrating as far south as in the past potentially due to the Sharp-shinned Hawk’s predation at bird feeders and possibly due to warmer winters.)

The Sharp-shinned Hawk is a difficult species to estimate population sizes because of its secretive nature (Reynolds and Wight 1978). Bildstein and Meyer (2000) reported a density of 0.88 nests/km2 in New Brunswick and 0.08–0.32 nests/km2 in Alaska, but both were based on limited data. The estimates for Alaska seem most reasonable for comparison with Minnesota. 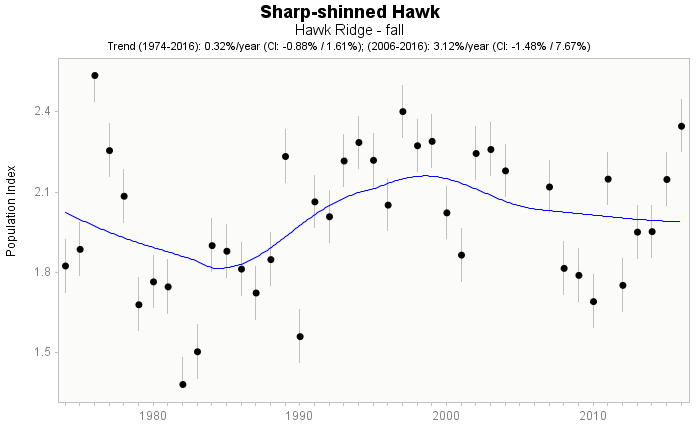 Fall migration counts of the Sharp-shinned Hawk at Hawk Ridge, Duluth, Minnesota, as calculated by the Raptor Population Index from 1974 to 2016.

Partners in Flight has assigned the sharpie a relatively low Continental Concern Score of 7/20 (Rosenberg et al. 2016). The only concern for the species is its relatively small North American population. The Sharp-shinned Hawk was previously listed on several species of concern lists in eastern and southeastern states, such as Threatened in Tennessee and Extirpated in Rhode Island, until the late 1980s. Environment Canada (2011) considered the species “not at risk.” Currently the species appears secure, but populations are difficult to monitor because they are difficult to detect and their primary breeding areas are in remote locations.

Bildstein and Meyer (2000) suggest that shooting still occurs to some degree but is not a likely factor affecting the species’ overall population. The sharpie’s elusive nature on breeding and wintering grounds is an advantage but it is vulnerable during migration. Keran (1981) reported that sharpies experience mortality from hitting cars and even more frequently at windows, especially near bird feeders.

Keyel (2015) found relatively high values of mercury in the feathers of Sharp-shinned Hawks captured at Hawk Ridge. He attributed these high values to the species’ diet of birds, because most raptors that had mammalian diets had relatively low levels of mercury. The overall effect of these levels on the species’ population is unclear. Little is known about the effects of climate change on this species. However, fall migration data from Hawk Ridge in Duluth, Minnesota from 1974 – 2009 identified that the Sharp-shinned Hawk was migrating 4 days later (Rosenfield et al. 2011). This was the first ever study in the world to document an autumnal shift for any raptor. The species wide distribution in North America may buffer it from the possible effects of a changing climate.

In summary, the future of the Sharp-shinned Hawk seems reasonably secure. The species has suffered many setbacks in its population in the past from human persecution, habitat change, and exposure to chemicals. Its future with exposure to mercury is unclear. The secretive nature of this species is a potential advantage because it tends to avoid interactions with people, except during migration, but the resulting limited understanding of the species’ status is a disadvantage. Management or conservation measures, therefore, could be difficult to implement in a timely manner.