Regular summer visitant and migrant; formerly bred in Minnesota from 1971 to 1986. The Snowy Egret was a very rare species during the Minnesota Breeding Bird Atlas (MNBBA).

The primary breeding range of the Snowy Egret is along the Atlantic and Gulf coastal areas, with inland fingers to southern Kansas and up the Mississippi River to southeast Missouri. In the west the Snowy Egret breeds locally in many states from Arizona and California north to Oregon and Montana. Disjunct breeding populations are present in eastern South Dakota (Tallman et al. 2002) and in the Great Lakes at Green Bay, Lake Michigan, and West Sister Island in western Lake Erie (Cutright et al. 2006; Peterjohn and Rice 1991; Rodewald et al. 2016). It is a breeder and permanent resident in many parts of Mexico, Central America, the Caribbean, and much of South America. In North America some of the highest breeding densities are found in southern California and the Gulf coast of Louisiana (Figure 1).

Designated a Species of High Concern by the North American Waterbird Conservation Plan; assigned a Continental Concern Score of 7/20 by Partners in Flight.

Northern breeding birds winter along the Gulf coast, in Mexico, and on the Caribbean Islands. During the migration period, wandering or dispersing birds can be found most anywhere in the United States to the southernmost Canadian provinces.

Feeds primarily on aquatic animals such as frogs, crayfish, small reptiles, fish, worms, and insects in shallow waters. The Snowy Egret employs a wide variety of foraging strategies, including actively running to flush prey, hopping, foot stirring, or standing still and stalking prey. It feeds in large groups with other Snowy Egrets and other waterbirds.

A platform nest of sticks constructed in a tree or in dense shrubs. Snowy Egrets nest in large multispecies colonies, occupying a core site with conspecifics within the larger colony. The birds select spots within the colony that can be defended from adjacent birds. 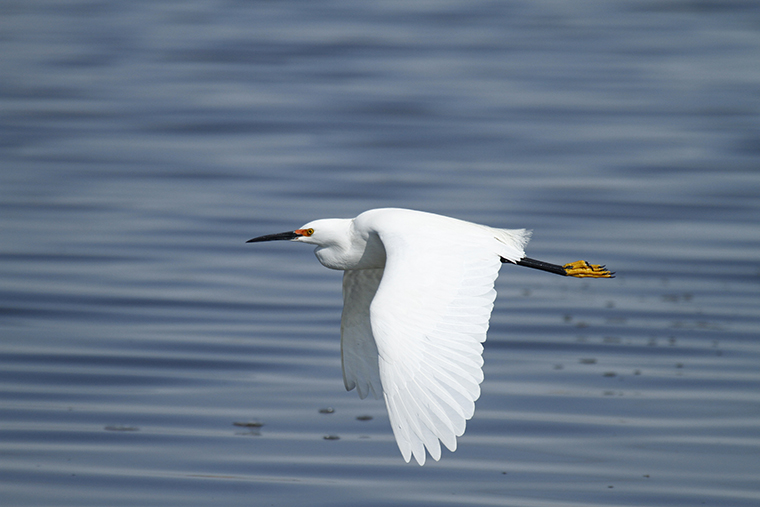 Breeding distribution and relative abundance of the Snowy Egret in North America based on the federal Breeding Bird Survey, 2011–2015 (Sauer et al. 2017).

This elegant egret, with its bright yellow feet, was not known in Minnesota when Roberts wrote his two-volume treatise on Minnesota birds in 1932. He wrote, “If the Snowy Egret ever occurred at all in Minnesota it was as a very rare straggler many years ago when Egrets were much more abundant than in recent years.” He noted, however, that a mounted bird, shot in April 1884 at Heron Lake, was seen on display there by J. W. Preston in 1885 (Roberts 1932). The first documented records in the state were reported in 1950 in Faribault County (Longley 1950), and in 1951 at Lake Traverse, Traverse County (Enstrom and Bardon 1986).

Snowy Egret records slowly increased in the 1960s and the 1970s, prompting the Minnesota Ornithologists’ Union (MOU) to change its status category from “casual” to “rare regular” in 1983. Breeding was discovered at three locations during this time of expansion: (1) Lake Johanna, Pope County, in 1971; (2) Big Stone National Wildlife Refuge (NWR), Lac qui Parle County, in 1977, 1978, 1980, and 1981; and (3) Agassiz NWR, Marshall County, in 1986. The first two sites are large, multispecies rookeries comprised primarily of Great Blue Herons, Great Egrets, and Black-crowned Night-Herons; the Snowy Egret observations were of a few nests at each site (2–12). Surveying these multispecies colonies in remote or not easily accessible locations is difficult and not done by casual observations. These colonies of hundreds or even thousands of birds are chaotic, and much patient watching is necessary to determine which species have nests where, especially for the small herons with small numbers. The nesting records in the late 1970s and early 1980s were reported by federal and state professionals either at national wildlife refuges or through the Minnesota Department of Natural Resources (MNDNR), Nongame Wildlife Program.

Summer observations of Snowy Egrets in Minnesota have steadily increased from the 1990s into the 21st century, but no other breeding records have been documented. Nevertheless, it should not be concluded that this egret has not continued to nest in small numbers. The MOU’s seasonal report observations from 1985 to 2015 consistently show clusters of observations in the counties where there are national wildlife refuges or large lakes with multispecies rookeries, such as Pelican Lake, Grant County, and Long Lake, Kandiyohi County. There also is a cluster of reports in the Twin Cities (Anoka, Hennepin, and Ramsey Counties), but it is hard to tell if they are the result of many observers or possible breeding at sites like the Minnesota Valley NWR, Carlos Avery Wildlife Management Area, and the Pig’s Eye Island Heron Rookery Scientific and Natural Area. Since the early 1980s, statewide colonial waterbird surveys have been limited to 5 aerial surveys of known Double-crested Cormorant and American White Pelican colonies conducted from 2004/2005 to 2015 (Hamilton and Cuthbert 2016). Although the colonies surveyed include most of the state’s largest mixed-species waterbird colonies, Snowy Egrets have not been reported. Identifying rare species that often nest lower in the canopy of colonies that contain hundreds of nests is extremely difficult from the air. As a result, periodic ground surveys are especially important for monitoring the breeding status of species like the Snowy Egret.

Snowy Egrets are regularly found in the state from mid-April through mid-October. Many of these birds are migrants or dispersing or wandering birds from other colonies. Almost all the records in the MOU seasonal reports are from the Prairie Parkland and Eastern Broadleaf Forest Provinces, the latter considerably fragmented by development and agriculture. Except for a few vagrants from the Duluth estuary (2000, 2006, 2007), the only other reports from the Laurentian Mixed Forest Province are single vagrants in Hubbard (2008), Lake (1984), and northern St. Louis (1985) Counties. Most observations reported are from the spring, which is the prime time for bird watching. There have been a couple of notable large influxes of Snowy Egrets in recent years. One was in 2000, which was well documented (Tustison 2001), and another was in 2004 (Budde et al. 2004). In the fall most birds are gone by the end of September.

During the MNBBA, participants reported only 3 Snowy Egret records from 3 of the surveyed atlas blocks (Figure 2 and Table 1). A “probable” observation (coded “N”) from the colony at Pelican Lake, Grant County, was recorded with the following notes: “8 adults seen foraging in stream connecting Melby Lake and Pelican Lake; adults fly out to island after foraging where huge heronry exists but nest not visible at this distance; strongly suspect breeding with other herons and egrets.” One “possible” record was reported from the Paynesville sewage treatment plant, Stearns County (“single adult bird with plume”), and 1 “observed” record was reported from southern Hennepin County (“2 birds seen”). During the atlas years, there were a number of summer observations of Snowy Egrets in the MOU database that were not submitted to the atlas but were from counties where known multiple-species colonies exist: Big Stone, Lac qui Parle, and Kandiyohi. 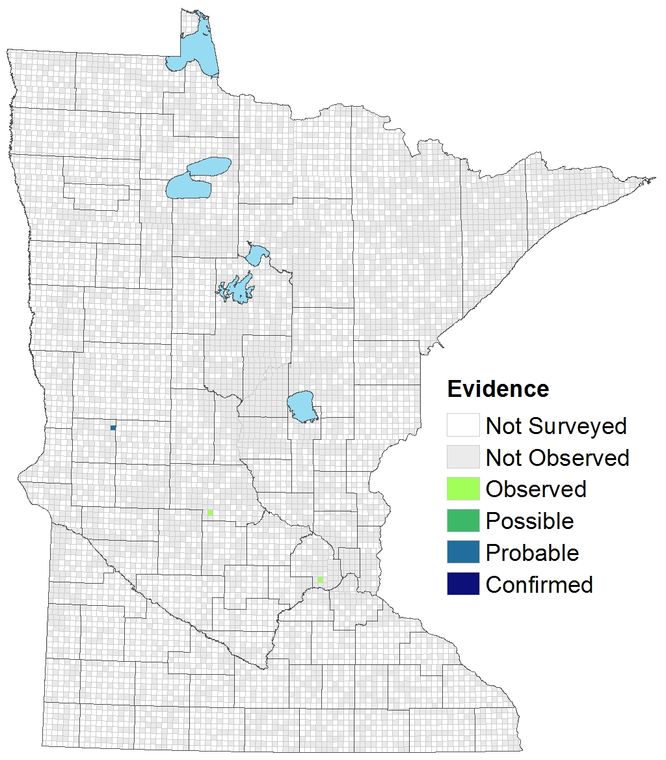 Breeding distribution of the Snowy Egret in Minnesota based on the Breeding Bird Atlas (2009 – 2013).

Summary statistics for the Snowy Egret observations by breeding status category for all blocks and priority blocks (each 5 km x 5 km) surveyed during the Minnesota Breeding Bird Atlas (2009-2013).

Like many herons, the Snowy Egret is gregarious and nests in multispecies colonies throughout its range in the United States. The placement of these colonies is both in coastal and freshwater habitats. The sites are varied, from upland islands in reservoirs, swamps, and river edges to coastal marshes and dredge-spoil islands. In the Upper Midwest, where the Snowy Egret is a very local breeder, the mixed-species colonies that it joins are in trees on islands in large lakes or in stands of trees along edges of reservoirs and large marshes. These sites provide the isolated remoteness that egrets favor. Foraging habitat includes slow, shallow streams and river and lake edges as well as water management impoundments and sewage treatment sites. In Minnesota, the colonies where they are known to nest were all in the Prairie Parkland Province or the Tallgrass Aspen Parklands Province. In the prairie pothole landscape, the species prefers wetlands with emergent vegetation, open water, and nesting trees (Kushlan et al. 2002).

Plume hunting had a huge impact on Snowy Egret populations and many waterbirds in the late nineteenth century. The number of birds declined, and the species’ range contracted. Once protective measures were enacted in the early 1900s, populations recovered and expanded north beyond their previous breeding range for many years. More recently, however, numbers have declined, and the northern extension of the species’ breeding range has again retracted southward. Competition for nest sites with other colonial waterbirds, such as Cattle Egrets and Black-crowned Night-Herons, has been cited as one potential cause (Parsons and Master 2005). 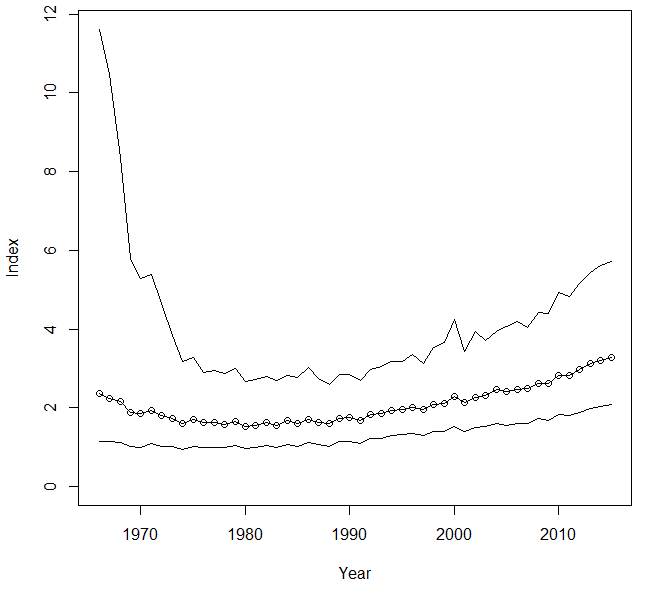 Breeding population trend for the Snowy Egret in North America for 1966–2015 based on the federal Breeding Bird Survey (Sauer et al. 2017).

The Snowy Egret is not given any classification in the federal Endangered Species program. However, it is listed as state endangered in Ohio (2016 status), threatened in Connecticut (1994 status), and special concern in Florida (1990 status). In the Canadian provinces closest to Minnesota, it is classified as a vagrant in Saskatchewan and rare in Manitoba. In the North American Waterbird Conservation Plan, it is given a conservation category of High Concern (Kushlan et al. 2002). In the Prairie Pothole Region, where it is not an abundant breeder and which has less than 1% of the continental population, it is given a conservation vulnerability ranking of Low Risk (Beyersbergen et al. 2004). Partners in Flight (2017) assigned it a relatively low Continental Concern Score of 7/20. Its broad distribution throughout the Western Hemisphere and its increasing population trend contributed to its low score. The “State of the Birds 2010 Report on Climate Change” assessed the species’ vulnerability to climate change as low (North American Bird Conservation Initiative 2010).

Threats to this heron on the breeding grounds include habitat destruction from some water management programs and land-use changes from urbanization and industrial agriculture. In some local circumstances, pesticides and other ecological contaminants can have a detrimental effect on hatching and fledgling survival. Wintering habitat in the tropics on the Caribbean Islands and in coastal Central America may also be at risk from the same threats. The North American Waterbird Conservation Plan stressed the need for intensified monitoring to establish population trends, and for surveying to identify key habitats for breeding, wintering, migratory, and foraging habitats (Kushlan et al. 2002).