A regular breeding resident and migrant restricted to northern Minnesota. The Solitary Sandpiper was a very rare species during the Minnesota Breeding Bird Atlas (MNBBA).

The Solitary Sandpiper is largely a species of boreal Canada. Federal Breeding Bird Survey (BBS) routes in southern Canada only detected the species in the western provinces of British Columbia, Alberta, and west-central Saskatchewan (Figure 1). The only known breeding records in the United States are in northern Minnesota and central Oregon.

Ranked as Least Concern by the U.S. Shorebird Conservation Plan Partnership; assigned a Continental Concern Score of 10/20 by Partners in Flight.

A long-distance migrant that winters in Central and South America.

Consumes a variety of insects and small crustaceans gathered along the edges of small pools.

Selects old tree and shrub nests constructed by other species, such as the American Robin and the Cedar Waxwing. 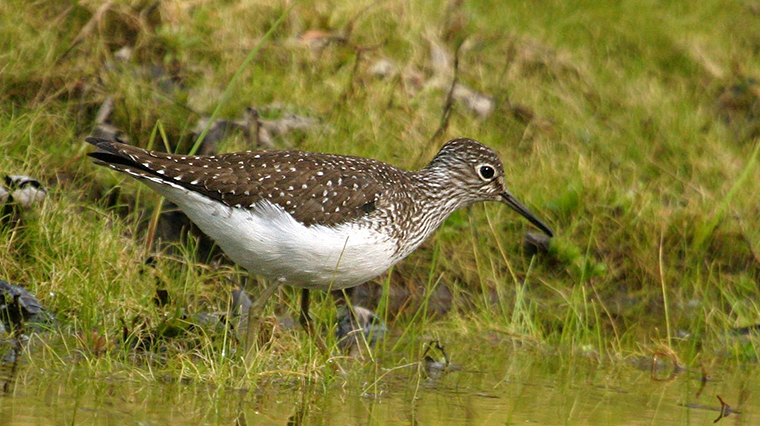 Roberts (1932) knew the Solitary Sandpiper as a “common, sometimes an abundant, spring and fall migrant throughout the state.” Its status as a breeding species, however, remained uncertain. Most of the summer records available to Roberts were from July and were classified as early fall migrants instead of breeding birds. Even a few late June records (June 26, 27, and 30) were considered potential fall migrants. In retrospect, repeated observations of a bird at the town of Biwabik, St. Louis County, in June 1908 and observations on June 26 and June 27 in 1922 from the Popular River in Cook County, are of particular note. Both sites are now within the species’ potential breeding range, but it is uncertain if these were breeding birds or migrants. Roberts also included one questionable breeding record from Jackson County in 1901. A pair of birds was observed for several days in early June on a “sparsely wooded island and point in the Des Moines River.” Several days later, four newly hatched young were seen. The observer, Mr. J.C. Knox, was considered careful by Roberts, but the possibility that the birds were actually Spotted Sandpipers seems quite likely, since that species is far more common in southwestern Minnesota.

The first well-documented breeding record was reported in the summer of 1973, more than 40 years after Roberts wrote his treatise on Minnesota birds. While driving along a county road that ran along the Mississippi River in Aitkin County in mid-July, Terry Savaloja stopped to look for a Song Sparrow nest. Instead, he observed a pair of Solitary Sandpipers flying overhead. When they landed along the river’s shoreline, a half-grown downy young appeared alongside them (Savoloja 1973). Then, in 1982, after spotting Solitary Sandpipers at two different wetlands in central Cook County the previous two summers, Ken and Molly Hoffman observed a pair of adults and a short‑tailed chick in an old drained beaver pond on June 30 (Hoffman and Hoffman 1982). Nesting continued to be documented in the area during the summers of 1983, 1984, and 1987 (Green and Janssen 1984; Hendrickson and Eckert 1985; Wilson and Shedd 1988). Both the 1983 and 1984 reports specifically referred to the site used in 1982 (T63NR1W); the 1987 report mentions the Lima Mountain Road which runs through the township.

The Cook County site remained the second breeding confirmation for nearly 30 years, until the Minnesota Biological Survey (MBS) documented fledged young in southern Lake of the Woods County in 2012. This record was included in the MNBBA, as was one additional confirmed nesting record from 2013. The 2013 observation was from northern St. Louis County, where an adult was seen with a begging juvenile. During the course of the MNBBA, 7 additional Solitary Sandpiper records were validated (4 probable records and 3 possible records), for a total of 9 records.

Each MNBBA record was scrutinized carefully, as well as nine other atlas records that were ultimately invalidated. Because the Solitary Sandpiper is observed throughout Minnesota in June, identifying which records represent late spring migrants, early fall migrants, or possible breeding records was challenging. Spring migrants have been observed in the state as late as early to mid-June and fall migrants as early as late June (Janssen 1987). In light of this information, two primary criteria for accepting Solitary Sandpiper breeding records from atlas volunteers were delineated. First, records during the first week of June were invalidated unless the observer included documentation noting that either a pair or an adult with young was observed. Second, the observations had to be in a suitable habitat in northern Minnesota. This analysis resulted in the validation of the 9 MNBBA records mentioned in the previous paragraph as well as the invalidation of 9 other records (Figures 2 and 3; Table 1). All nine validated records were submitted by atlas volunteers or by the MBS. The species was not reported on any of the point counts. As shown in Figure 2, all validated records are from the northern reaches of 4 northern counties: Koochiching, Lake, Lake of the Woods, and St. Louis.

Because the species occupies remote wetlands throughout the boreal forest region, little is known about any historical changes to its breeding distribution over the past century. 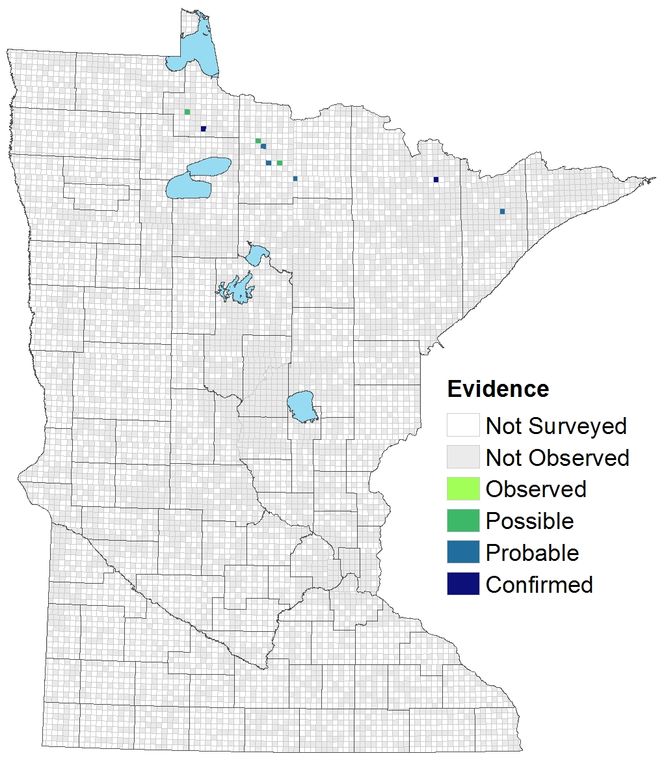 Breeding distribution of the Solitary Sandpiper in Minnesota based on the Breeding Bird Atlas (2009 – 2013).

Summary statistics for the Solitary Sandpiper observations by breeding status category for all blocks and priority blocks (each 5 km x 5 km) surveyed during the Minnesota Breeding Bird Atlas (2009-2013).

The Solitary Sandpiper is found in peatlands with scattered open pools and ponds. Because the species is frequently observed during migration, more details are available regarding the marshes, rice paddies, and brackish coastal habitats it uses in the spring and fall. Far less is available to describe its relatively inaccessible breeding habitat. Moskoff (2011) simply describes the species’ nesting habitat as “freshwater lakes and ponds in areas of muskeg bogs and spruce trees” and “margins of shallow water near woodlands, mainly coniferous forest.” Sites that provide 2.5–7.5 cm of water are preferred (Russell et al. 2016).

The best qualitative description of the habitat the Solitary Sandpiper uses in Minnesota was provided by Ken and Molly Hoffman when they discovered Minnesota’s second breeding record in Cook County (Hoffman and Hoffman 1982). Birds were observed over the course of three summers from 1980 to 1982. All observations were made at “drained beaver ponds with extensive mud areas and standing dead trees.” At least one of the sites was a large black spruce bog where the trees had died due to the beaver dam’s high water; in its place were standing dead trees, a mix of marsh grasses, and dense thickets of alder brush. A mat of sphagnum was largely dead and appeared like a large mud flat bisected by two small rivulets meandering through the site.

Because it is so difficult to adequately survey breeding areas, population estimates for the Solitary Sandpiper are based on counts taken during migration. The most recent estimate of the North American population number is approximately 189,000 individuals (Andres et al. 2012), which is up slightly from a previous estimate of 150,000 individuals in 2001 (Morrison et al. 2001). Biologists originally suspected the bird’s population was declining (Brown et al. 2001), but they now report that trends are quite variable from year to year, with uncertainty about the long-term trend (Andres et al. 2012). Data collected by the federal BBS show a stable population with a non-statistically significant increase of 0.34% per year (Sauer et al. 2017). Due to the species’ extremely low abundance (an average of only 0.09 birds are observed per BBS route per year), these trend data should be viewed with caution.

The U.S. Shorebird Conservation Plan originally classified the Solitary Sandpiper as a Species of High Concern (Brown et al. 2001). A recent reassessment of the status of all shorebirds (U.S. Shorebird Conservation Plan Partnership 2016) reevaluated that classification and downgraded the species to a classification of Least Concern. This was based on a recent, higher population estimate for the species and observations that population numbers were highly variable between years and among sources.  In contrast, Partners in Flight recently assigned the species a moderate Continental Concern Score of 10/20; concern regarding the Solitary Sandpiper’s relatively small population size contributed most to the score (Partners in Flight 2017).

Little information is available on the Solitary Sandpiper, particularly regarding its status and population trends, so specific conservation measures have not been delineated. Historically, the species’ boreal habitat has been considered secure, but the more recent loss of habitat due to urbanization, agriculture, forestry, and energy development now raises concern, particularly in western Canada, the heart of the species’ range (North American Bird Conservation Initiative Canada 2012).

A long-distance migrant, the Solitary Sandpiper, like many other migrant shorebirds, is still hunted during migration and on its wintering grounds in the Caribbean and in South America (Smith 2016). Because of its solitary nature, hunting is not considered to have impacted Solitary Sandpiper numbers to the same degree that it impacts species like the Red Knot, which congregate in sizable numbers at large stop-over sites during migration or on its wintering grounds (Moskoff 2011).

Warming temperatures also may pose a challenge to this boreal nesting species. A recent assessment of the sandpiper’s response to climate change predicted that 93% of its current breeding range could be lost by the year 2080, potentially forcing the bird even further north (Langham et al. 2015; National Audubon Society 2017).  As a result of the assessment the species was classified as “climate threatened”.

In Minnesota, more intensive surveys in key northern counties could provide additional information about the species’ habits and habitats as well as unravel much of the mystery that embraces this poorly known inhabitant of our northern peatlands and boreal forests. Appropriately named, this solitary shorebird remains a rare and elusive member of Minnesota’s avifauna.