A regular breeding resident and migrant; occasional during the winter months throughout much of Minnesota. The Song Sparrow was a very abundant species during the Minnesota Breeding Bird Atlas (MNBBA).

Found across the southern half of Canada from British Columbia east to southern Quebec, southern Newfoundland, and Labrador. In the United States it occurs throughout much of the western United States, including southern Alaska, and throughout the north-central and northeastern states. Song Sparrows are rare to absent in the southern plains and Gulf coast states. A disjunct breeding population occurs in central Mexico. During the summer, the species reaches its highest breeding densities in the southern Great Lakes region, from Wisconsin east to southern Quebec (Figure 1).

A compact open-cup nest; usually located on the ground but may be found in shrubs or small trees, or attached to emergent vegetation in wetlands. 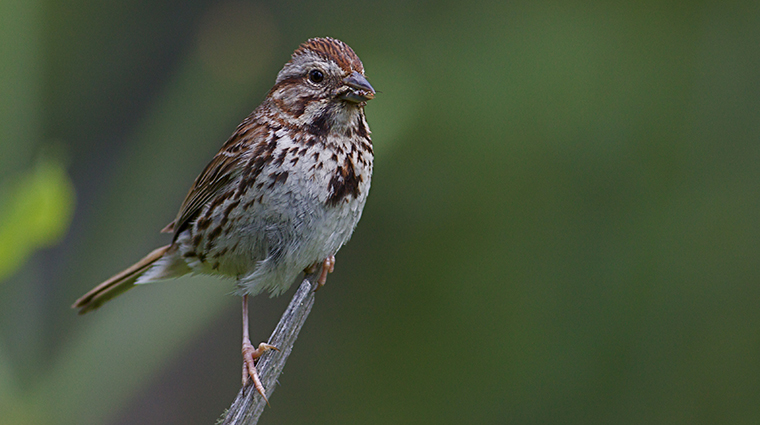 Breeding distribution and relative abundance of the Song Sparrow in North America based on the federal Breeding Bird Survey, 2011-2015 (Sauer et al. 2017).

Since Roberts (1932) wrote his first comprehensive account of the Song Sparrow, it has been recognized as an abundant summer resident throughout the state. He wrote:

The Song Sparrow is among the most abundant and most generally distributed of Minnesota birds. Bushy meadows and the banks of lakes and streams are the chosen dwelling-places, but it is not confined to such surroundings and may be found almost anywhere about prairie groves, upland fields, clearings, and gardens, shunning only the deep shade of heavy timber.

At the time, nesting was confirmed (nest with eggs) in 12 counties across central and northern Minnesota as well as at Itasca State Park and in the regions of Mille Lacs, Cass Lake, and Leech Lake.

The Song Sparrow is a complicated and extraordinary little bird. It displays more morphological variation than any other species in North America (Arcese et al. 2002). In the early 20th century, Roberts (1932) sent 61 Minnesota specimens to the U.S. Biological Survey for analysis and identification. All but 3 of the specimens were ascribed to Melospiza melodia juddi, the Dakota Song Sparrow. The remaining three specimens were ascribed to the Eastern Song Sparrow, M. m. melodia. Both subspecies have now been combined into M. melodia, which ranges across the northern United States and southern Canada, from the Great Plains east to the Atlantic coast.

Decades later both Green and Janssen (1975) and Janssen (1987) stated that the Song Sparrow was one of the “most numerous and evenly distributed breeding species in the state.” Janssen (1987) identified 32 counties where nesting had been confirmed since 1970. Hertzel and Janssen (1998) later added 10 counties to the list. Beginning in the late 1980s, field staff with the Minnesota Biological Survey documented 3,228 breeding season locations for Song Sparrows, covering all regions and counties in the state (Minnesota Department of Natural Resources 2016).

MNBBA participants reported 9,019 Song Sparrow detections in 79.7% (3,828/4,804) of the surveyed atlas blocks and in 95.0% (2,222/2,338) of the priority blocks. Breeding evidence was documented in 587 (12.2%) surveyed blocks (Figures 2 and 3; Table 1). The species was reported in all 87 Minnesota counties and was confirmed breeding in 80 counties (2 blocks each straddled 2 counties). In total, Song Sparrows were the fourth most common species observed during the atlas, behind the American Robin, Common Yellowthroat, and Red-winged Blackbird.

The MNBBA predicted distribution map reflects both the species’ abundance and broad distribution throughout Minnesota (Figure 4). High breeding densities are concentrated in a band that runs through the Eastern Broadleaf Forest Province and northwest through the Tallgrass Aspen Parklands Province. The lowest breeding densities are predicted only for the core of the Twin Cities metropolitan region and portions of many of the densely forested counties including Cook, Lake, Koochiching, and St. Louis. Overall, there are few areas in the state where one is not guaranteed of seeing and hearing Melospiza melodia, the “melodious singing sparrow” (Erickson 1988).

Historically, the distribution of the Song Sparrow appears to have changed very little. Although it has always found suitable habitat in small wetlands and forest openings in the most heavily forested landscapes, the clearing of many such areas for agricultural and urban development has created even more habitat opportunities in many regions (Arcese et al. 2002). As the MNBBA results and the MNBBA probability map demonstrate, intensive development is not a deterrent to the species. 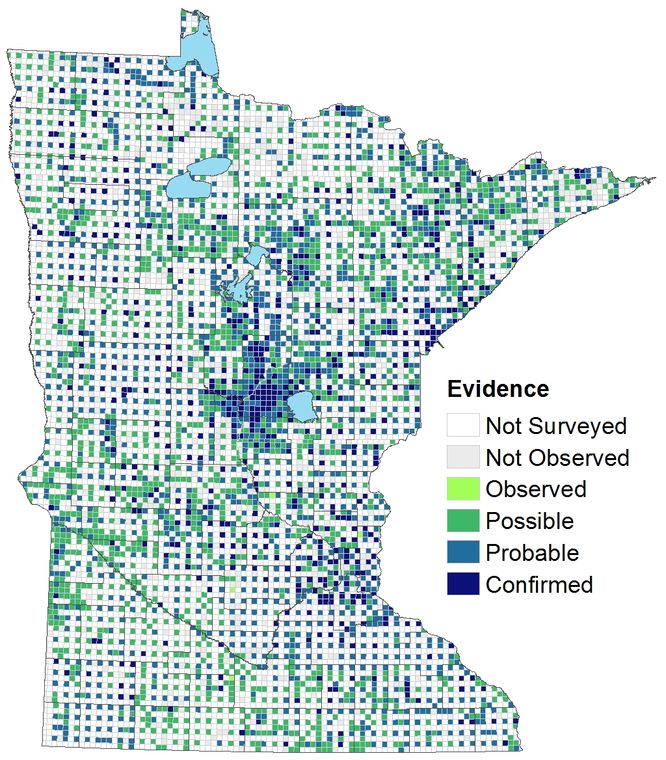 Breeding distribution of the Song Sparrow in Minnesota based on the Breeding Bird Atlas (2009 – 2013).

Summary statistics of observations by breeding status category for the Song Sparrow in Minnesota based on all blocks (each 5 km x 5 km) surveyed during the Breeding Bird Atlas (2009-2013).

Summary statistics for the Song Sparrow observations by breeding status category for all blocks and priority blocks (each 5 km x 5 km) surveyed during the Minnesota Breeding Bird Atlas (2009-2013). 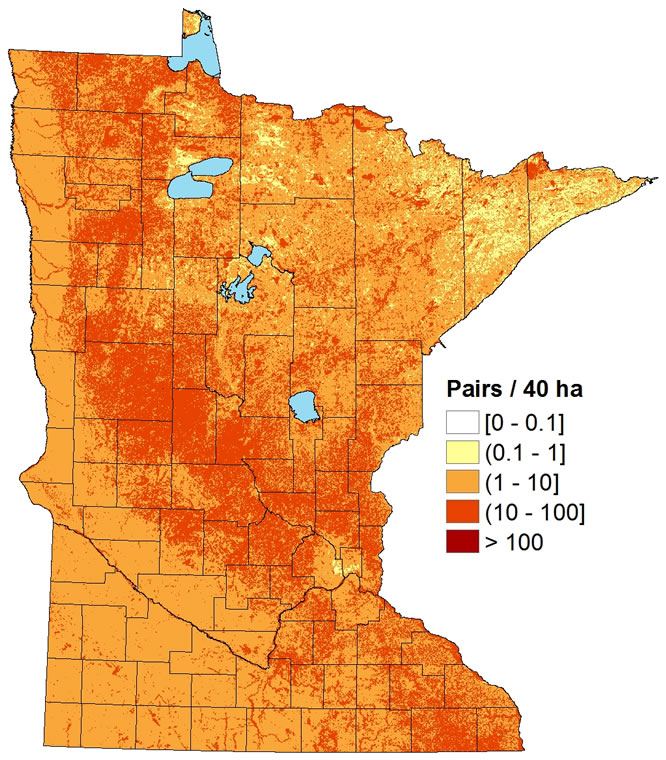 Predicted breeding distribution (pairs per 40 hectares) of the Song Sparrow in Minnesota based on habitat, landscape context, and climate data gathered during the Minnesota Breeding Bird Atlas (2009-2013) using the General Linear Modeling method with an adjustment for detectability.

Song Sparrows are found in a wide range of open and semiopen habitats that support an abundance of scattered shrubs and small trees. Sites may be as diverse as desert scrub, arctic-alpine grasslands, temperate rain forests, floodplain forests, and tidal marshes (Arcese et al. 2002). An adaptable species, they can also be found in small towns and residential areas where small pockets of shrubby habitat are available.

In Minnesota, Song Sparrows are found in any small opening or clearing that provides the necessary cover, from small prairie groves to forest clearings to woodland edges (Danz et al. 2007). Regardless of this diversity, they are most frequently associated with shrubby riparian habitats along streams, rivers, lakeshores, and wetlands (Figure 5). In a long-term study of forest songbirds in four national forests in northern Minnesota and Wisconsin, Niemi and his colleagues (Niemi et al. 2016) found that open wetlands, sedge meadows, and water communities (e.g., riparian areas) were the species’ preferred habitats, followed by small towns and upland openings. The MNBBA confirmed the wide range of habitats utilized statewide. Within 200 m of point counts where Song Sparrows were detected, all major cover types were recorded at some level. Most common were grasslands, shrub wetlands, marsh/wet meadows, oak forests (which include deciduous lowlands), and cropland (Figure 6). 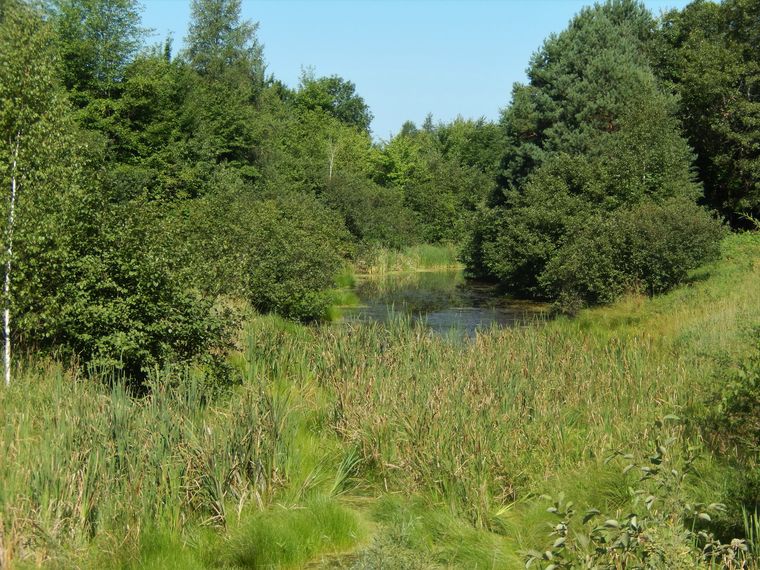 Typical breeding habitat of the Song Sparrow in Minnesota (© Lee A. Pfannmuller).

Habitat profile for the Song Sparrow based on habitats within 200 m of point counts where the species was present during the Minnesota Breeding Bird Atlas (2009-2013).

The Song Sparrow is a common bird along Minnesota BBS routes. An average of 41 birds per BBS route are detected in the state each year. Even higher numbers are seen in Wisconsin (56) and Michigan (49) (Sauer et al. 2017).

Since long-term monitoring of North American birds began in the 1960s, the Song Sparrow has demonstrated a slow but steady and significant decline of 0.76% per year across the BBS survey area (Sauer et al. 2017). Cumulatively, from 1970 to 2014, the continental population has experienced a 25% decline (Rosenberg et al. 2016). In Minnesota, the number of breeding birds has fluctuated widely and demonstrates a significant annual decline of 0.47% per year (Figure 7). At both the national and state level, the rate of decline has increased in the most recent 10-year sampling period, from 2005 to 2015. On the Chippewa and Superior National Forests, where the species has been intensively monitored since 1995, Song Sparrows have declined significantly on the Chippewa National Forest. Although they have not declined significantly on the Superior National Forest, when data from the two forests are combined, they demonstrate a significant regional decline in numbers (Figure 8). 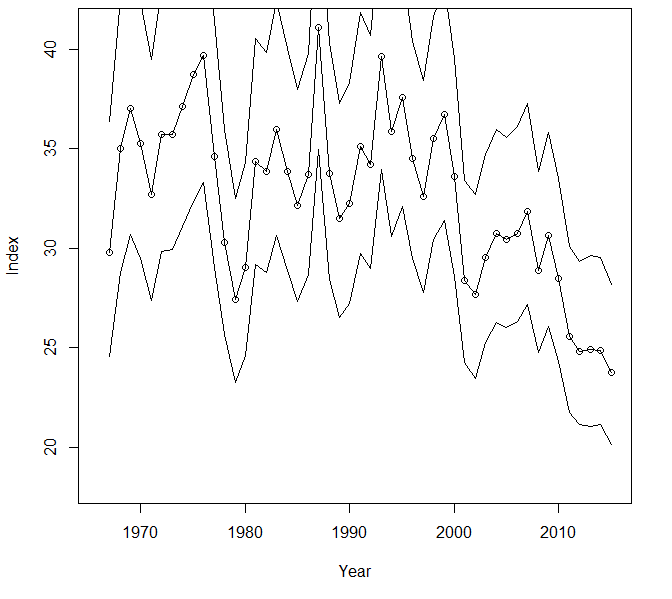 Breeding population trend for the Song Sparrow in Minnesota from 1967-2015 based on the federal Breeding Bird Survey (Sauer et al. 2017). 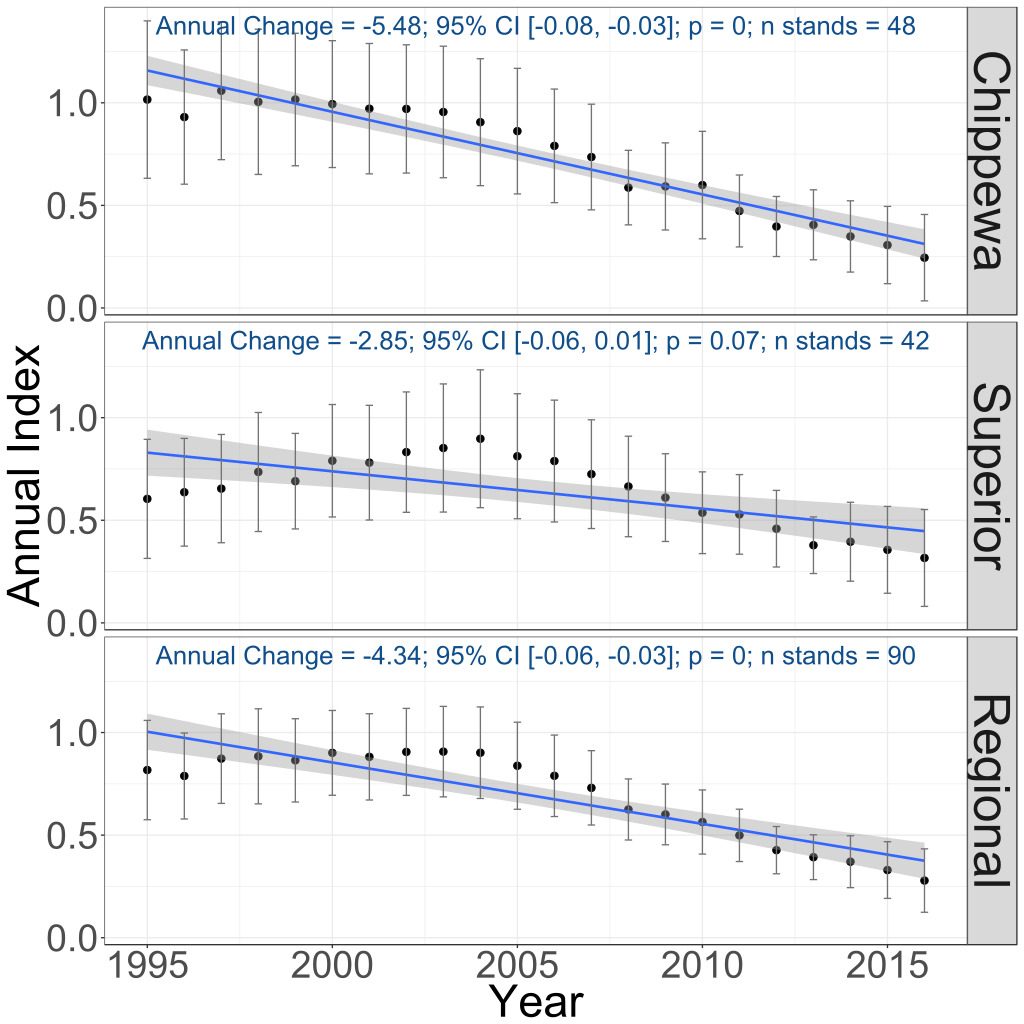 Breeding population trends of the Song Sparrow in the Chippewa and Superior National Forests of Minnesota from 1995-2016 (Bednar et al. 2016).

Despite its slowly declining population, the Song Sparrow remains one of the most abundant and widely distributed songbirds in North America. It is not considered a conservation priority at either the state or federal level and has been assigned a low Continental Concern Score of 8/20 by Partners in Flight (Rosenberg et al. 2016). Because the Song Sparrow is highly adaptable, initial assessments have concluded that climate change will have little impact on the species’ distribution and abundance (North American Bird Conservation Initiative 2010).

Although it is easy to take such an abundant and widely distributed species for granted, local populations of the Song Sparrow were extirpated along the coast of California where there was a documented loss of tidal marsh habitat. They have also declined in areas of the Southwest where riparian habitats have been lost or degraded. Nevertheless, as one of the most abundant species observed during the MNBBA, the Song Sparrow’s future in Minnesota seems quite secure.