A regular breeding resident and migrant. The Spotted Sandpiper was an uncommon species during the Minnesota Breeding Bird Atlas (MNBBA).

Sparsely distributed across northern and central North America, the Spotted Sandpiper is a solitary species. It is rare to sight more than a single bird or, at most, a single family. It is most abundant during the breeding season in the northern Rockies (Figure 1).

Ranked as Least Concern by the U.S. Shorebird Conservation Plan Partnership and assigned a Continental Concern Score of 10/20 by Partners in Flight.

Medium- to long-distance migrant that winters in the southern United States, Central America, and South America.

A small scrape lined with dead grasses and usually located within a few hundred meters of water, where herbaceous vegetation can provide some cover. 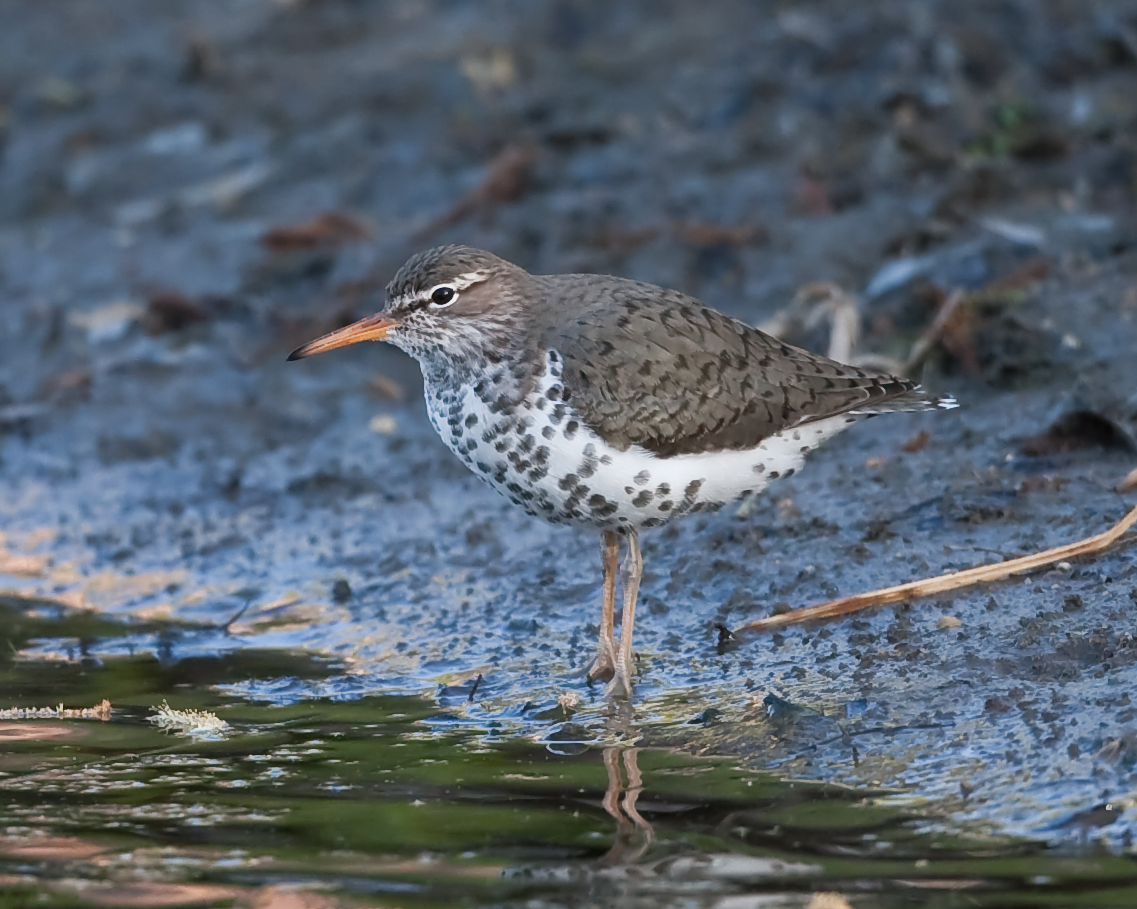 Breeding distribution and relative abundance of the Spotted Sandpiper in North America based on the federal Breeding Bird Survey, 2011–2015 (Sauer et al. 2017).

In Minnesota, Roberts (1932) described the species as a common summer resident throughout the state:

The Spotted Sandpiper, or Teeter Snipe, is by far the most common and generally distributed of the summer-resident members of the Shore Bird group in Minnesota. It is found throughout the state without regard to any special environment. Any variety of shore-line or water-margin, even though it be only that of a stagnant pool in a quarry or brickyard, seems to be acceptable to the plebeian taste of this little Sandpiper.

At the time, nesting records (nests with eggs or downy young) were available from Jackson County in the southwest, Hennepin, Sherburne and Wright Counties in central Minnesota, and  Cook, Itasca,, and St. Louis Counties in the north.

Both Green and Janssen (1975) and Janssen (1987) considered the Spotted Sandpiper a breeding resident throughout the state when they provided updated status accounts decades later. It was most abundant, they noted, along the Mississippi River and in the northern lakes region. Janssen (1987) identified 25 counties where nesting had been confirmed since 1970; all but five were located north of the Minnesota River. A few years later, Hertzel and Janssen (1998) added five additional counties to the list, including three south of the Minnesota River.

Field staff with the Minnesota Biological Survey (MBS) have documented a total of 103 breeding season locations. In contrast to earlier reports that found the species most abundant along the Mississippi River and in northern Minnesota, nearly half of the MBS records were located either along or south of the Minnesota River valley; only 2 records were reported along the Mississippi River valley south of the Twin Cities (Minnesota Department of Natural Resources 2016).

During the MNBBA, participants reported a total of 603 Spotted Sandpiper detections in 10.4% (493/4,747) of the surveyed atlas blocks and in 11.6% (270/2,337) of the priority blocks. Breeding evidence was documented in 44 (0.9%) of the blocks (Figures 2 and 3; Table 1). The species was observed in 80 of Minnesota’s 87 counties and was confirmed breeding in 26 counties. Two blocks straddled 2 counties (Polk/Marshall and Morrison/Cass). Of the confirmed nesting records, 8 were south of the Minnesota River and 3 were in counties along the Iowa border where earlier accounts had not previously documented nesting. Thirteen of the counties where nesting was confirmed were additions to the list published by Hertzel and Janssen (1998): Carlton, Faribault, Fillmore, Goodhue, Houston, Itasca, Morrison, Otter Tail, Pennington, Pipestone, Polk, Ramsey, and Wright.

Although the species is widely dispersed across the state, an unusually high number of MNBBA reports were gathered from several western counties, including Big Stone, Chippewa, Lac qui Parle, Lincoln, Swift, and Yellow Medicine, due largely to intensive survey efforts by one individual. Even when this local sampling bias is accounted for by examining data only in the priority blocks, the Spotted Sandpiper was still most abundant in the Prairie Parkland and Eastern Broadleaf Forest Provinces and least abundant in the Laurentian Mixed Forest Province.

Despite earlier reports that the species was most abundant along the Mississippi River, only a handful of records were found in the Mississippi River valley from the Twin Cities south to the Iowa border. It appears that the species’ abundance in the northern lakes region may have declined as well. Intense development and recreational pressure along lake shorelines grew throughout the latter half of the twentieth century. Itasca County alone, in the heart of Minnesota’s northern recreational region, witnessed a 31% increase in lakeshore development in just a six-year period from 1992 through 1998 (Dempsey 2006). An increase in buildings, docks, and boats often leaves little room for shoreline inhabitants like the Spotted Sandpiper. High water levels in some regions of the state may also be contributing to declining numbers.  Shorelines now inundated by water no longer provide that narrow band of shoreline habitat that is critical for the Spotted Sandpiper (Robert Russell, pers. comm.).  Although one may presume that the “teeter bird” was a common species in Roberts’s time, during the MNBBA it was classified as an uncommon species.

Across North America, the Spotted Sandpiper has not experienced any large-scale changes to its distribution in the past one hundred years (Reed et al. 2013). Neighboring states and provinces that have conducted atlases, including Wisconsin, Iowa, and South Dakota, have all reported that the species remains as widely dispersed today as it did decades ago (Cutright et al. 2006; Iowa Ornithologists’ Union 2017; Drilling et al. 2016). Although the species’ distribution remains unchanged, many states and provinces that have conducted two atlases report a decline in abundance. 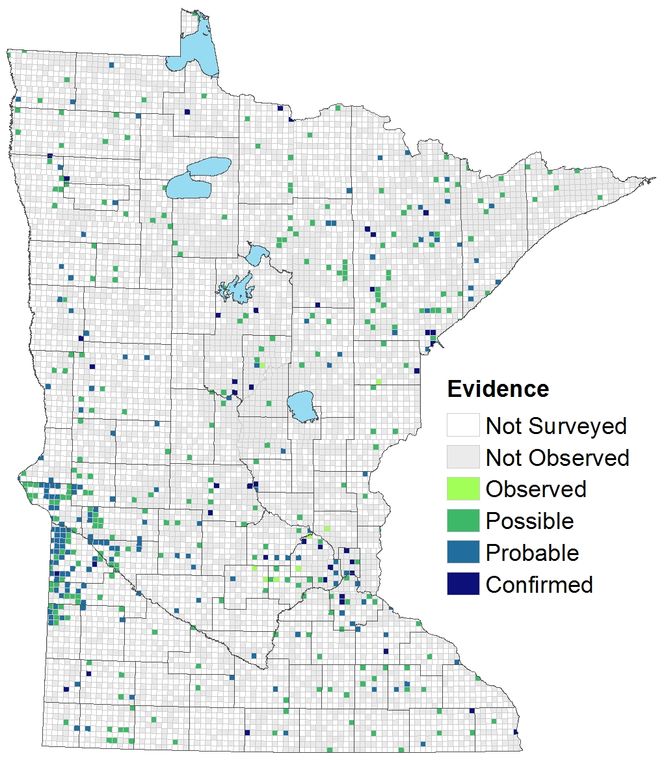 Breeding distribution of the Spotted Sandpiper in Minnesota based on the Breeding Bird Atlas (2009 – 2013).

Summary statistics of observations by breeding status category for the Spotted Sandpiper in Minnesota based on all blocks (each 5 km x 5 km) surveyed during the Breeding Bird Atlas (2009-2013).

Summary statistics for the Spotted Sandpiper observations by breeding status category for all blocks and priority blocks (each 5 km x 5 km) surveyed during the Minnesota Breeding Bird Atlas (2009-2013).

During the summer, the Spotted Sandpiper selects a broad variety of habitats, ranging from remote islands to gravel pits and artificial wetlands to fields and parks in urbanized landscapes (Figure 4). In recent years the species also has been a regular resident at many sewage treatment plants in Minnesota where the steep, rocky shorelines do not seem to be a deterrent to breeding (Kim Eckert, pers. comm.). Regardless of which habitat is selected, three primary elements are included: (1) shorelines along streams, lakes, or wetlands that are used for foraging and displaying; (2) open habitats for nesting; and (3) patches of denser vegetation for brood cover (Reed et al. 2013). Open areas with low herbaceous cover are preferred for nesting. Breeding densities are especially high on islands surrounded by deep water because such sites provide some protection from terrestrial predators (Reed et al. 2013). If open areas are not available close to the shoreline, the birds select suitable sites some distance away and then move the chicks to the shoreline once they have hatched. 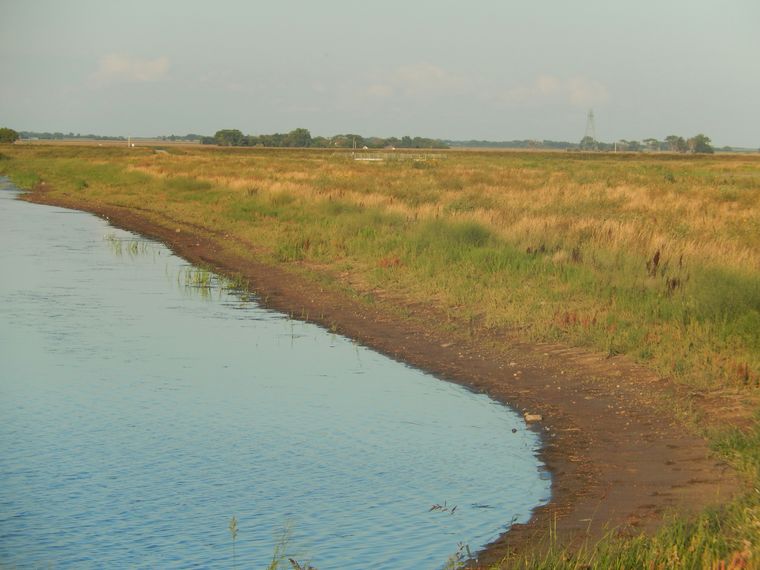 Typical breeding habitat of the Spotted Sandpiper in Minnesota (© Lee A. Pfannmuller).

Although nearly 60% of the Spotted Sandpiper’s breeding range is monitored by the federal Breeding Bird Survey (BBS), the species’ shoreline habitat is not captured well by the roadside survey methodology. As a result, biologists have not attempted to use BBS data to generate population estimates. Instead, shorebird biologists have examined migration data and consulted with species experts in an attempt to estimate global population sizes.

The most recent population estimate for the Spotted Sandpiper is 660,000 birds (Andres et al. 2012), which is significantly higher than previous estimates in 2001 and 2006 of 150,000 birds (Morrison et al. 2001, 2006). The higher estimate was based in part on a study in Ontario that estimated the population in that province alone numbered in the hundreds of thousands (Ross et al. 2003).

Breeding densities are quite variable and reflect the availability of shoreline habitat. In a long-term study conducted on Little Pelican Island in Leech Lake, densities on the beach were as high as 52 adults/1.6 ha (Oring et al. 1991). Indeed, at one time Little Pelican Island supported the largest known colony of Spotted Sandpipers in the world. Further west, in Itasca State Park, shorelines were more limited in extent and only supported 2 adults/1.6 ha (Oring and Knudson 1972).

The Spotted Sandpiper’s sparse distribution, coupled with the limitations of the BBS survey method in monitoring shoreline nesting birds, means that statistical analyses of population trends are not as robust as they are for many landbirds that nest in grasslands and forests. With this caveat in mind, BBS data at both the national level and for Minnesota suggest that Spotted Sandpiper populations are declining. Across the BBS survey area, numbers are declining at the rate of 1.35% per year since 1966, while in Minnesota the average decline is more than twice as steep at 3.18% per year (Sauer et al. 2017). In contrast, in their recent review of the status of North American shorebird populations, Andres and his colleagues believed that, overall, the available data for the Spotted Sandpiper suggested a stable population trend (Andres et al. 2012).

The most important factor that appears to influence local populations is the “availability of safe nesting sites” (Reed et al. 2013). Islands or shorelines that are bounded by large expanses of low herbaceous cover provide the most protection from predators. Weather can also influence annual reproduction but is considered “secondary to predation” (Reed et al. 2013).

When the first status assessment of North American shorebirds was conducted in 2001, the Spotted Sandpiper was classified as a Species of Low Concern (Brown et al. 2001). Since that time, two additional reviews have been conducted, and the classification has remained unchanged (U.S. Shorebird Conservation Plan Partnership 2004; U.S. Shorebird Conservation Plan Partnership 2016). The rating is based on its abundance, what shorebird biologists believe is a relatively stable population, and the species wide distribution on both its breeding and wintering ranges. Threats to its breeding and wintering habitat are considered low. In contrast, Partners in Flight recently assigned it a Continental Concern Score of 10/20.  Concerns included what they assessed as its relatively small population size coupled with the declining population trend suggested by BBS data (Partners in Flight 2017). The species is not a conservation concern in Minnesota.

Regardless of its low to moderate ranking, the Spotted Sandpiper’s dependence on shoreline habitats is cause for concern. As noted earlier, lake shorelines are a heavily used resource in Minnesota. Many lakeshore homeowners, in an effort to create a “clean” lakefront, eliminate natural habitats valuable for shoreline plants and animals. Recent efforts by state and local conservation agencies and organizations to encourage restoration of natural shoreline habitats are extremely important and will benefit a suite of shoreline species, including the Spotted Sandpiper. Dredge spoil islands, which provide important habitats along the Mississippi River, also should be periodically cleared either by natural flooding or mechanical means to maintain the semi-open habitat favored by the species (Russell et al. 2016).

Climate change may pose some challenges to the species. Although The State of the Birds 2010 Report on Climate Change (North American Bird Conservation Initiative 2010) ranked the Spotted Sandpiper as having a low vulnerability to warming temperatures, a recent modeling assessment by the National Audubon Society revealed some concern. The society predicted the species could lose approximately 57% of its current summer range by the year 2080 and classified the sandpiper as “climate threatened” (Langham et al. 2015; National Audubon Society 2016).

Today the “Teeter Snipe” remains a well-distributed species in Minnesota, but its future is not guaranteed. In light of continued pressure on its highly prized shoreline habitat, coupled with other potential threats, closer monitoring is warranted, especially because of the conflicting results of current population trends. The species’ utilization of several modified habitats and landscapes, however, demonstrates a level of adaptability that may serve it well in the future.