A regular but erratic breeding resident, migrant, and winter visitant.

The White-winged Crossbill has a highly variable breeding distribution in Canada and many of the states in the northern parts of the United States, plus scattered areas of the Rocky Mountains (Figure 1). Some of the highest recorded densities have been in northern Manitoba, southwestern Alberta, northeastern British Columbia, and Labrador. A subspecies (L. l. bifasciata) occurs throughout the Palearctic region from northern Scandinavia to Siberia.

Seeds of spruce, tamarack, and occasionally balsam fir; invertebrates and seeds of many plant species in summer.

Cup-nest, mostly in spruce tree away from trunk. 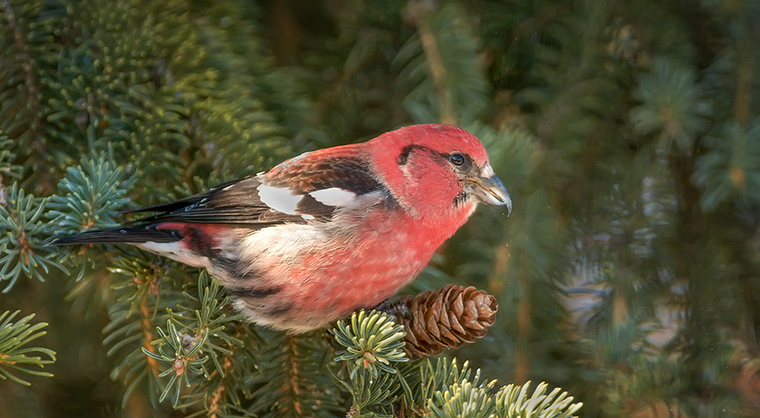 Breeding distribution and relative abundance of the White-winged Crossbill in North America based on the federal Breeding Bird Survey from 2011 to 2015 (Sauer et al. 2017).

The White-winged Crossbill is found primarily in the coniferous zone of north-central and northern Minnesota (Roberts 1932). In contrast to the Red Crossbill, Roberts never reported it during the summer in the southern counties of the state. Also no nests were reported, though he stated that it “unquestionably breeds commonly in many localities.” He included an observation by Surber of “parents feeding full-fledged young out of nest” on August 8, 1922, in Cook County.

Roberts documented its distribution as north and northeastward from northern Isanti County west to Wadena and Roseau Counties. Several observers noted that it was “common in Itasca County”; extremely abundant from June 20 through July 1901, at Hibbing, St. Louis County;” and “common on the Iron Range about Hibbing, Virginia, Biwabik, and Wolf” in the early 1900s.

More than 40 years later, Green and Janssen (1975) still labeled it as “a very scarce resident in the northern coniferous forests.” No nests had been found by the early 1970s, but fully fledged young being fed by adults were observed in Clearwater, Cook, and St. Louis Counties. After 1970, few data were added by Janssen (1987), except the first summer record of the White-winged Crossbill in Minnesota found at Luverne in Rock County on July 5, 1975. The first confirmed nest in the state was discovered by a young birder, Jacob Langeslag, in March 1996. Documented in detail by Little and Langeslag (1996), the nest was found, surprisingly, in Rice County in southeastern Minnesota.

In contrast with the MBS, the MNBBA included 28 records with a breeding distribution that was quite different, largely because the MBS had not yet covered northern Beltrami, Koochiching, or Lake of the Woods Counties (Figure 2). Nesting was confirmed in Roseau County, a new county record and only the third known nesting record for the state. The MNBBA also recorded one probable nesting in Lake County and 25 possible nesting locations. These included 3 blocks in northern Beltrami County, 5 in Cook County, 1 in Itasca County, 4 in Koochiching County, 7 in Lake County, and 2 in St. Louis County (Figure 3; Table 1).

Benkman (2012), in his review of the White-winged Crossbill in North America, provided no perspective on historical changes to its North American distribution. This was mainly because of the lack of solid observational or nesting data. There also is no basis to suggest the distribution of this species in Minnesota has changed appreciably over the past 150 years.

Robbins (1991) cited one nesting record from Oconto County, Wisconsin, in 1894 and otherwise labeled the White-winged Crossbill as a “rare summer resident north.” Cutright et al. (2006) had seven quads with confirmed nesting during the Wisconsin breeding bird atlas from 1995 to 2000, including one nest, the first in the twentieth century. Similar results were reported by Brewer et al. (1991) in Michigan, where there were 2 historical nesting records from 1891 and 1941 in the western Upper Peninsula. Michigan’s atlas from 1983 to 1988 also revealed 2 nesting records from the western Upper Peninsula. Ontario’s atlas reported that knowledge of the breeding distribution of the White-winged Crossbill was poorly known before its first atlas in 1981–1985 (Cadman et al. 2007). They subsequently reported that the White-winged Crossbill had a broad distribution of observations from the northern regions of the province. During Ontario’s second atlas, in 2001–2005, they found the distribution had not changed, but substantially more evidence of breeding was identified. They attributed this to better identification skills by observers and to widespread and frequent irruptions that occurred during the second atlas period.

Robbins (1991) points out the potential problem with its identification by stating, “Anyone who does not recognize the call note is bound to find the White-winged Crossbill rare.” Data from the second atlas in Ontario provided some evidence for problems with identification, especially by call notes, as the species flies overhead, but phases of its irruptions complicate this issue in Ontario. Nevertheless, the White-winged Crossbill is known to be almost motionless while feeding on cones on the top of trees, and to vocalize only when leaving the tree where it was foraging. Hence, historically and today, the species may be easily overlooked. 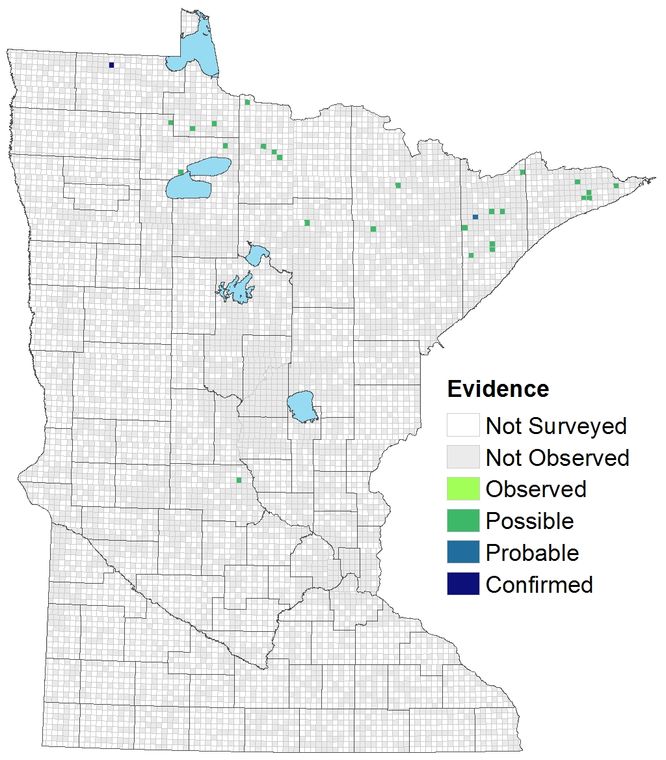 Breeding distribution of the White-winged Crossbill in Minnesota based on the Breeding Bird Atlas (2009 – 2013).

Summary statistics of observations by breeding status category for the White-winged Crossbill in Minnesota based on all blocks (each 5 km x 5 km) surveyed during the Breeding Bird Atlas (2009-2013).

Summary statistics for the White-winged Crossbill observations by breeding status category for all blocks and priority blocks (each 5 km x 5 km) surveyed during the Minnesota Breeding Bird Atlas (2009-2013).

In contrast with the Red Crossbill and its high association with pine, this species is primarily associated with coniferous forests but mainly white and black spruce, tamarack, balsam fir, and hemlock (Benkman 2012). Figure 4 is a typical breeding habitat of the White-winged Crossbill here dominated by white spruce trees. Green (1995) reinforced this by noting the species’ preference for black and white spruce seeds. 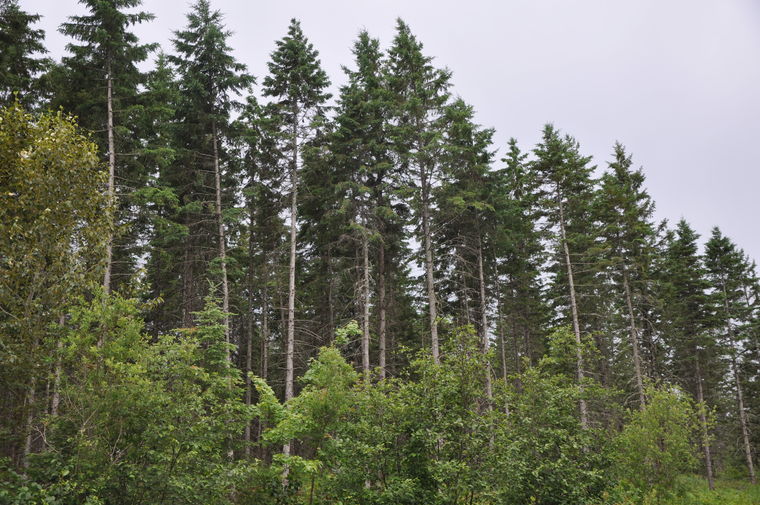 Rosenberg et al. (2016), as part of Partners in Flight, estimated a North American population of 35 million breeding adults. A reliable estimate could not be provided from the MNBBA data because the species was too rare. In addition, all trend estimates from the federal Breeding Bird Survey (BBS) were considered unreliable because of too few routes or an unsatisfactory number of counts within routes. Included among the primary reasons for the lack of trend estimates were the high variability in counts and poor coverage within its primary breeding range in high latitudes and high altitudinal regions. Despite these limitations, Rosenberg et al. (2016) estimated that the population had increased by 163% from 1970 to 2014.

Environment Canada (2014) suggested that both the BBS and Christmas Bird Counts “show wide variation, but overall the population has shown an increase since about 1970.” It estimated an adult population that ranges from 5 to 50 million adults. The wide range reflects the high uncertainty in population estimates but also the high variability in its population.

With a score 7 out of 20 by Partners in Flight, there is currently little conservation concern for the White-winged Crossbill. Among the reasons for the score are its apparently stable population and its very wide Holarctic distribution across northern North America, Europe, and Asia. Environment Canada (2014) does caution that “large-scale forestry that reduces the age-class distribution of spruce forests enough to limit cone production could be detrimental.” Furthermore, Fowells (1965) noted that maximum cone production does not occur until trees are over 60 years of age.

Several researchers have specified the importance of conifer seed availability as a limitation on White-winged Crossbill populations (Pulliainen 1971; Bock and Lepthien 1976). When seed availability is low, the species is more nomadic, and mortality, especially among younger birds, is greater (Benkman 2012). Benkman (1993) noted that broad-scale conservation in regions of the North American continent may be important because cone production during any year can be low in one or more regions of the continent. Thus, a network of suitable regions across the continent may be essential for the long-term survival of this species.

Climate change is also a potential threat to this species because of its northerly distribution. Langham et al. (2015) and the National Audubon Society (2015), in its analysis of climate sensitivity of North American bird species, identified the White-winged Crossbill as “climate threatened.” The basis for this designation was the potential loss of 85% of its current summer range by 2080. Furthermore, they suggested that newly available habitat to the north would need to be colonized by small-coned conifers such as spruce, tamarack, or fir. Overall, gambling on the presence of new suitable habitat presents a risky future for this species if climate change continues.