The breeding distribution of the Yellow-breasted Chat in the United States has two distinct sectors, which can be described as eastern and western. The eastern is found primarily in the southeastern United States and north to the southern Great Lakes states and west to the Great Plains. The western population is in scattered nodes of suitable habitat from California and the Pacific Northwest, across the southern Prairie provinces, and then south from the Dakotas to Texas and the southwestern states; there are also breeding outliers in north-central Mexico. The species is found in highest abundance in the south-central states of Arkansas, Louisiana, Mississippi, and Alabama (Figure 1).

A medium-distance migrant that winters in Mexico and Central America.

An omnivorous species that feeds on arthropods and many different berries and grapes. It forages in dense vegetation and, unique for a warbler, can grip its food before eating.

A bulky, open-cup nest lined with vine bark, pine needles, fine weed stems, or grass and placed 0.3 to 3 meters above the ground in thick vegetation. 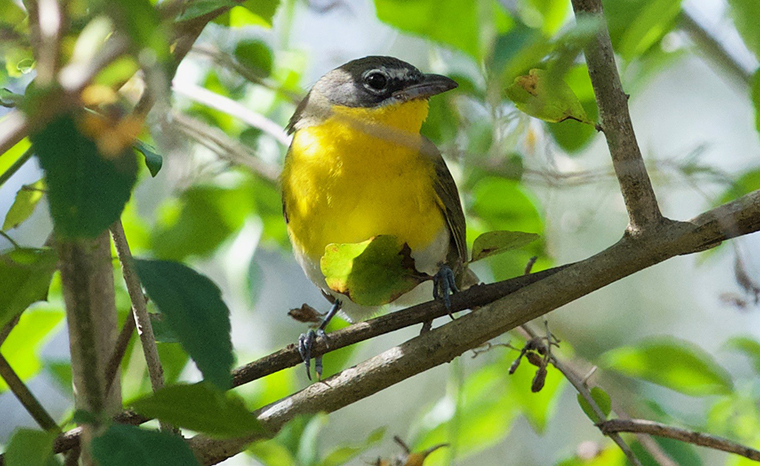 Breeding distribution and relative abundance of the Yellow-breasted Chat in North America based on the federal Breeding Bird Survey, 2011–2015 (Sauer et al. 2017).

When Roberts (1932) compiled records for the Yellow-breasted Chat, he had very little information and only a handful of observations throughout the whole state; he concluded that “the Chat is a very infrequent straggler from the south.” These few records included a specimen (“skin is in the study collection”) from Heron Lake, Jackson County, sent to him on May 28, 1890, and a nest with eggs near Wilder, Jackson County, on July 1, 1898. Another record was a pair seen by T. Surber at Hokah, Fillmore County, on June 30, 1920. In 1934, there were 2 other observations: Mrs. C. E. Peterson banded 2 on August 26–27, at Madison, Lac qui Parle County (reported in the Journal of Minnesota Ornithology, St. Cloud), and Dr. C. C. Prosser found 1 near Lake Harriet in Minneapolis on May 14, which Roberts saw the next day (Roberts 1936).

In the decades that followed, more information about the Yellow-breasted Chat’s distribution accumulated. In 1938, Erickson and Upson (1938) made a trip to Houston County in May and found the chat “one of the most abundant warblers,” and a nest was discovered there on June 13. The next information from the southeastern counties (1947 to 1955) was that the chat was “very common” along the Mississippi River from Brownsville to Reno, Houston County (Bergerud 1947). Breeding evidence was obtained there in 1948 (Warner 1952) and in 1953 and 1955 by Brother Theodore (Herz 1954; Guttman 1956). Also, staff at the University of Minnesota’s Bell Museum of Natural History found the chat in Goodhue County during bird trips (Warner 1952). In the southwest corner of the state, at Ortonville, Big Stone County, Alma Chesley reported seeing chats “from time to time” from 1923 to 1943, and nesting was confirmed in 1941 and 1942 (Chesley 1943). In Lac qui Parle County, Mrs. C. E. Peterson reported “banding 11 chats between 1934 to 1950” (Strnad 1959).

These records established the presence of a breeding population in southwestern and southeastern Minnesota. The population along the western border, which was reported for only a few years, has not persisted. The pattern of records in the southeast, however, shows an increasing trend. In the decades from 1960 to 2016, Yellow-breasted Chat summer observations increased steadily in the southeast: from 1960 to 1979 the bird was seen in 5 years, from 1980 to 1999 it was seen in 12 years, and from 2000 to 2016 it was seen in 12 years. The area covered is from the Twin Cities south to Houston and Fillmore Counties and west to Nicollet and Blue Earth Counties. Migrant records for the Yellow-breasted Chat, derived from the Minnesota Ornithologists’ Union’s (MOU) seasonal report, were mostly in the spring (38 out of 50 years), and many fewer in the fall (16 out of 50 years). Migrants are almost all found in the southern half of the state. There are a few exceptions along the western border counties and several at vagrant hot spots along the North Shore of Lake Superior: 2 spring records in Duluth (1974, 1982), 2 fall records (1997, 2012), and a fall record in Grand Marais, Cook County (1983).

Breeding evidence since 1960 included finding a nest with eggs at the Whitewater Wildlife Management Area (WMA), Winona County, in 1976 (Eckert 1977), but then no other breeding records until 2007, when a pair and an empty nest were seen at Black Dog Preserve, Minnesota Valley National Wildlife Refuge (Kessen and Svingen 2008). After the MNBBA survey period, more breeding evidence was obtained in 2015 from Rock Dell Township, southwest of Rochester, Olmsted County (Kessen et al. 2016). From the years 2000 to 2016, other places where the Yellow-breasted Chat has been seen multiple days in the summer are Great River Bluffs State Park, Winona County (4 years); William O’Brien State Park, Washington County (2008); Baker Park Preserve, Hennepin County (2008); and Bud Jensen WMA, Dodge County (pair, 2016). All these places should be regularly checked to determine if there is a persistent breeding population of the chat in Minnesota.

The MNBBA data include 3 possible records submitted during the safe nesting dates, all seen in the southeastern corner of the state in appropriate habitat in Goodhue County (6/10/2009 in 112R13a), Houston County (7/4/2012 in T104R7b), and Fillmore County (6/8/2013 in T104R8a) (Figure 2). In 2009, a record from Hennepin County was submitted to the Minnesota Ornithologists’ Union. Two chats were reported in 2009 at Hyland Lake Park Reserve, Bloomington, both heard about 500 meters apart from one another. They were first found on June 2, 2009, by Conny M. Brunell and last observed (both) by her on July 28, 2009; they were also found by many other observers between those two dates. This record is also in the MOU’s seasonal report (Kessen and Svingen 2010). 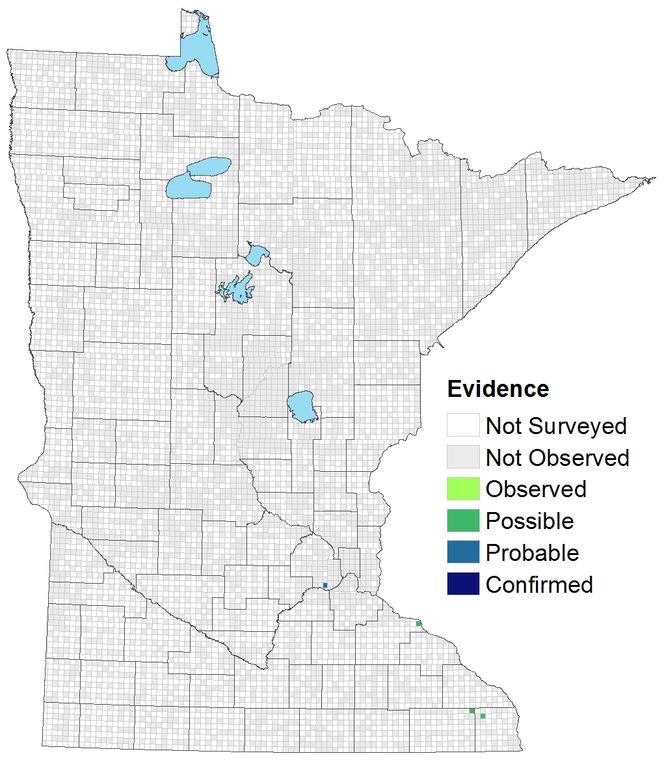 Breeding distribution of the Yellow-breasted Chat in Minnesota based on the Breeding Bird Atlas (2009 – 2013).

Summary statistics for the Yellow-breasted Chat observations by breeding status category for all blocks and priority blocks (each 5 km x 5 km) surveyed during the Minnesota Breeding Bird Atlas (2009-2013).

The basic characteristic of the Yellow-breasted Chat’s habitat is dense thickets and brushy tangles. Dunn and Garrett (1997) described the habitat as follows:

Eastern birds favor thickets, briar patches, willow clumps, multiflora rose brambles and other thorny clumps for breeding. Such thickets may either be in lowland floodplains or in upland regions. . . . Some taller trees are required for song perches. Western populations are more closely tied to streamside thickets of willow, mesquite, mulefat and other riparian species, with tangles of grapevines, etc. . . . In the prairie regions they prefer impenetrable thickets of buffalo berry, hawthorn, and rose under stands of cottonwoods.

Partners in Flight (Rosenberg et al. 2016) gives the number of Yellow-breasted Chats for the United States and Canada as 14 million birds. The federal Breeding Bird Survey (BBS) shows strong patterns of population change among different regions of the species’ range. In the Eastern BBS region, the Yellow-breasted Chat is significantly declining by 1.02% per year from 1966 to 2015; it is stable in the Central BBS region with no statistical change, and it is significantly increasing in the Western BBS region by 0.95% per year. The survey-wide trend in the United States was significantly declining by 0.62% per year over the same time period (Figure 3). In their review of the Yellow-breasted Chat, Eckerle and Thompson (2001) concluded that “densities vary considerably among different habitats for unknown reasons.” Rosenberg et al. (2016) estimated that Yellow-breasted Chats populations had declined by 11% from 1970 to 2014. 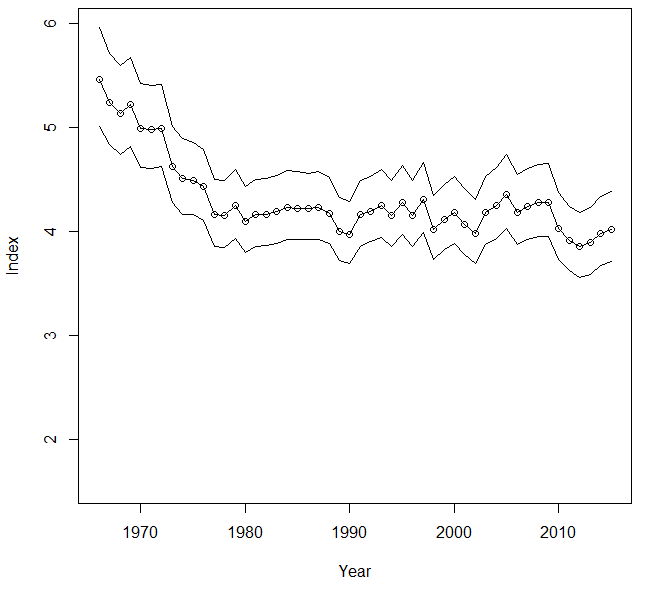 Breeding population trend for the Yellow-breasted Chat survey-wide for 1966–2015 based on the federal Breeding Bird Survey (Sauer et al 2017).

Partners in Flight assigned the Yellow-breasted Chat a Continental Concern Score of 10/20, which suggests the species has a moderate risk of concern. The species has a relatively large population and a wide geographic range. In the northeastern states, Massachusetts to Maryland, there has been a significant decline of the Yellow-breasted Chat attributed to the widespread increase of maturing forests. It has a state classification status of Endangered in Connecticut and Special Concern in New York and New Jersey. In Canada, under the federal Species at Risk Act (SARA), the western subspecies, Icteria virens auricolis, has been given the status of Endangered for the Southern Mountain population in British Columbia, probably because of habitat alteration and destruction. Also in Canada, under SARA, the eastern subspecies, Icteria v. virens, has been given the status of Special Concern for Ontario. In both the United States and Canada, the Yellow-breasted Chat is protected under the Migratory Bird Species Act of 1918.