The Yellow-throated Warbler is primarily found in the southeastern United States. It is bounded in the north by states along the northern border of the Ohio River valley from Pennsylvania to Illinois, south from Missouri to the Gulf states, west to eastern Texas, and from Florida up the Atlantic Coast to New Jersey. It also breeds in the Bahamas, where it is found year-round. The highest densities are found in the southern Appalachian Mountains and along the southern Atlantic Coast (Figure 1).

Northern and interior populations are medium- to long-distance migrants and winter in the Caribbean islands and along the Gulf Coast in Mexico to Costa Rica. Populations in Florida and along the southern Atlantic Coast are permanent residents.

Insectivorous, feeding particularly on lepidopteran larvae, flies, spiders, and many other insects. The species has a diverse foraging behavior, foraging by creeping up the tree trunk and along large branches and by probing with its relatively long bill into bark crevices or into needle clusters and cones in pines. Also known to glean for insects on the foliage and to fly-catch.

A cup nest lined with vegetation of moss, often a clump of Spanish moss. Placed in the top of a pine, sycamore, cypress, or other canopy tree, usually 9–18 m high but can be from 1–36 m high. 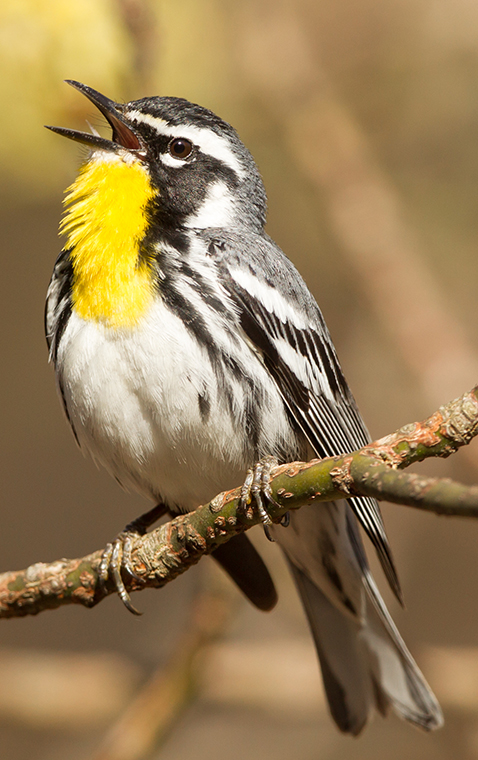 Breeding distribution and relative abundance of the Yellow-throated Warbler in North America based on the federal Breeding Bird Survey, 2011–2015 (Sauer et al. 2017).

The Yellow-throated Warbler was not known as part of the state’s avifauna until after Roberts (1932) and Green and Janssen (1975) were published. The first documented record was a bird found on May 6, 1980, in a wooded area in Roseville, Ramsey County (Soulen 1980). Records continued over the rest of that decade, totaling 5 in spring and 1 in the fall. Over the next decade (1991–2000), the number of observations increased markedly, with 16 spring, 1 fall, and 1 winter record. The winter record was of a bird at a suet feeder in Wright County that died when the temperature dipped below zero on December 11, 1994 (Janssen 1995).

During the 1990s, 7 of the 16 records were from Kandiyohi County, where the first observation occurred near Willmar in 1993. The next year a bird was seen about 25 km north in Sibley State Park. Either a singing male or a pair was observed in the park from mid-May to early summer every year from 1994 to 2000. The first evidence of nesting was reported in 1997 in a large cottonwood along Lake Andrew. On May 29, both the male and female were seen and the female went to the nest, which was 9–11 m high. The nest was later abandoned, collected, and given to the Bell Museum of Natural History (Frederickson 1998). All the records from these two decades were accepted by the Minnesota Ornithologists’ Union (MOU) Records Committee and compiled in The Loon (Mattsson 2001). In addition to the observations in Kandiyohi County, most of the other 16 records were in the Twin Cities metropolitan area, though three migrants were also observed in Clay, Freeborn, and Marshall Counties.

Fewer summer records were reported in the twenty-first century, with the exception of the first successful documented breeding of the Yellow-throated Warbler. The bird was seen at the Acacia Park Cemetery in Mendota Heights, Dakota County, from June 11 to July 1, 2001. It was observed almost daily by many people, and the nest, with young, was discovered on June 25 about 10 m up in a Norway spruce; three young fledged on June 30 (Mattsson 2001). The second successful breeding record was in 2013 at Whitewater State Park, Winona County. There a singing male was sighted on May 10 in tall pines near the Nature Center parking lot and the middle fork of the Whitewater River. The male was observed by many people in June and July. On July 27, a singing male with three begging juveniles was found, photographed, and described in an entry to the MNBBA (block T107R10c) (Figure 2). This was the third breeding record for the state.

Another observation the same year was of an adult on June 26, 2013, at Carley State Park (T108R11c), along the north fork of the Whitewater River in Wabasha County (Kessen and Svingen 2014), about 12 km away from Whitewater State Park. Both records were accepted by the MOU Records Committee (Tustison 2013). Yellow-throated Warblers were seen at Whitewater State Park over the next three years, but no other breeding evidence was obtained (Tustison 2015; Fall 2016). The fourth successful breeding record was obtained in 2016, when a pair fledged two young at Gold Medal Park, near downtown Minneapolis in Hennepin County (Fall 2016).

It is not clear whether these four breeding records (1997, 2001, 2013, and 2016) indicate an expanding breeding population of the Yellow-throated Warbler or whether they are isolated breeding activities by spring migrants that overshot their usual range to the south. Apart from these four breeding sites, most observations in the twenty-first century have been single observations of warblers in spring or summer in the extensively birded Twin Cities area (7 records) and in southeastern Minnesota (Dodge and Olmsted Counties). One record with multiple dates in one location from the Twin Cities is a warbler seen in William O’Brien State Park, Washington County, from June to August 2000 (Eckert 2001; Zumeta 2001). Vagrants increased in the north from 2000 to 2016: two in the Duluth area (September 9, 2008; May 18, 2009), one in Morrison County (May 15, 2005) and one in Otter Tail County (October 21–22, 2011). Only time will tell if the Minnesota presence of the Yellow-throated Warbler grows and leads to a sustainable population. Its status from the MOU has been designated as “casual” since 1988.

What is known is that the distribution of the Yellow-throated Warbler has changed over time. The species disappeared from the northern periphery of its range in the late nineteenth and early twentieth centuries for reasons that are not well understood. However, after about 1940, its populations increased sufficiently to reclaim much of that range and may have even expanded further northward in some areas (McKay and Hall 2012).

In some states adjacent to Minnesota (Michigan, Wisconsin, and Iowa), the published records show that summer populations have been sporadic from the late 1800s in both southern Michigan and in eastern and southern Iowa. Both states have few confirmed nesting records. These breeding activities have not been part of a sustained breeding population and the numbers and localities have varied over the years. However, in the last two decades, the number of observations has increased and the locations have expanded. The pertinent published information for Michigan comes from Granlund et al. (1994), Brewer et al. (1991), and Sanders (2011). Another puzzle is the decades-long, unexplained disappearance of this warbler in Michigan, from about 1910 to 1970, as well as in adjacent Ohio. Possible explanations include habitat disturbance and/or destruction or a weather-induced migration catastrophe (Brewer et al. 1991). The Yellow-throated Warbler has not established a breeding population in Wisconsin, although there is one confirmed record from the late 1980s in Rock County. Robbins (1991) suggested that the species presence in this area is likely a part of a population just south of the border in Illinois. An Endangered Resources Fact Sheet from the Wisconsin Department of Natural Resources (WDNR) summarized the status of the Yellow-throated Warbler as “formerly bred among mature floodplain hardwoods (with sycamore) along the Sugar River in Rock County, but now it breeds regularly only at Wyalusing State Park among mature oaks and upland white pine relicts embedded within a large tract of upland hardwood forest” (WDNR 2013). During the survey for Wisconsin’s breeding bird atlas (1995–2000), this warbler was recorded as “probable” in two southwestern counties, Grant and Sauk (Cutright et al. 2006). 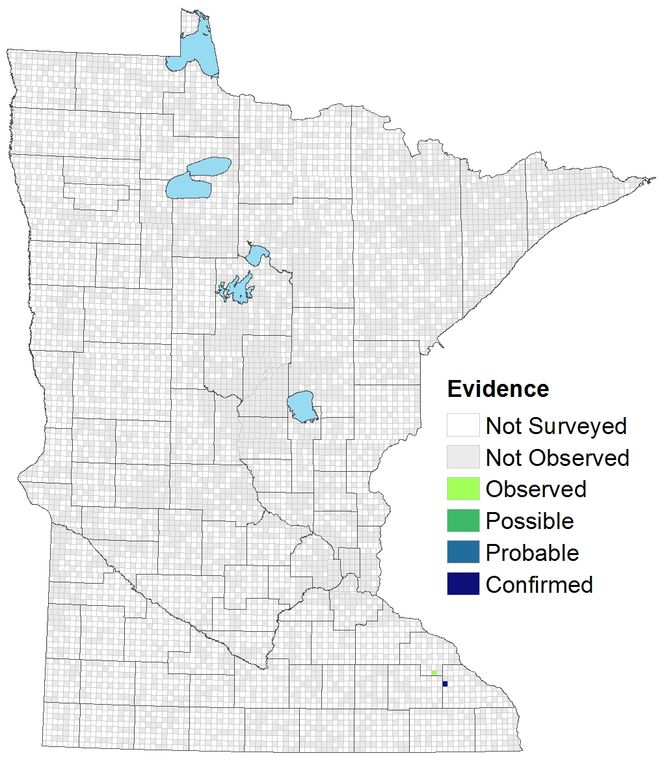 Breeding distribution of the Yellow-throated Warbler in Minnesota based on the Breeding Bird Atlas (2009 – 2013).

Summary statistics for the Yellow-throated Warbler observations by breeding status category for all blocks and priority blocks (each 5 km x 5 km) surveyed during the Minnesota Breeding Bird Atlas (2009-2013).

The habitat of the Yellow-throated Warbler varies throughout its range. In the South, it is found in lowland swamps with cypress, live oak, and tupelo, or in mixed pine-deciduous forests and upland pine, especially loblolly pine. Both Spanish moss and supercanopy trees are important components. In the North, the species is found in the tributary valleys of the big northern rivers, often in sycamore bottomlands but also in upland woodlands, where it prefers forests with clumps of mature pines. Big supercanopy trees are a component in both habitats (Dunn and Garrett 1997). The structure of the forest vegetation, with open understory as well as tall canopy trees, seems to be more important than the actual type of forest habitat.

Partners in Flight estimated a moderate Continental Concern Score of 10/20 (Rosenberg et al. 2016). Issues that contributed to its ranking included concerns with its relatively small population size, the limited data on its population and distribution, and threats to its breeding habitat. The Yellow-throated Warbler does not have a national conservation status, and the population range-wide in the United States appears to be secure and increasing. Two states at the northern edge of its range have included this species on their state lists: the warbler is classified as Threatened in Michigan (2009) and Endangered in Wisconsin (2015). At the western edge of its range, Kansas gives this warbler a state status of “nongame species in need of conservation.” None of these states has a formal management plan.

No doubt there is substantially more information to know about the Yellow-throated Warbler. In its review of North American birds susceptible to climate change, Langham et al. (2015) and the National Audubon Society (2015) identified the Yellow-throated Warbler as “climate threatened.” The society’s models suggest that 59% of its summer range is susceptible to habitat loss due to climate change by 2080. Adaptation to the changing climate will require expansion of the species to northeastern forests that may or may not be suitable. Bird watchers and nature enthusiasts should definitely look for this interesting and colorful warbler throughout the northern portions of its range.